The International Museum of Surgical Science is dedicated to enhancing an understanding of the history, development of, and advances in, surgery. It is the only museum in North America covering such subject matter. I wanted to visit for many reasons. Not only because of my current role, but also, because I’m genuinely interested in the history of surgery – except for when it becomes a little too gory.

The following post will start by covering the building and layout before moving into exhibitions and specific objects. Enjoy!

The Museum is housed in what was a lakeside mansion belonging to Eleanor Robinson Countiss and her family. Eleanor’s father was an extremely wealthy businessman who invested a lot of money in matches. The family settled in Chicago in 1887. Here, Eleanor met Frederick Downer Countiss (President of the Chicago Stock Exchange). Although he was dating her sister, the tables turned and Frederick and Eleanor married in 1910. Part of their wedding gift was a downpayment to build the mansion. Construction began in 1917. Eleanor was inspired by Le Petit Trianon in Versailles, France designing the mansion to look identical. 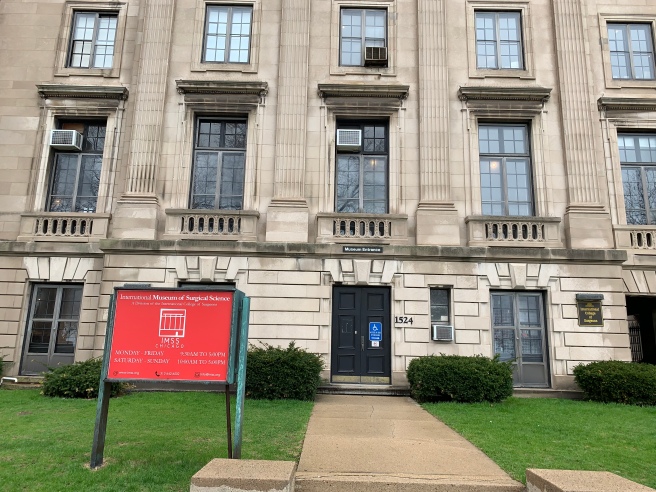 Today, it is one of the few surviving lakefront mansions in Chicago and the only one open to the public. For this reason, it was listed in the National and Illinois Register of Historic Places. It was acquired by the International College of Surgeons in the early 1950s and opened as a museum in 1954.

When you visit, keep in mind it was once a residence. Because of this, the rooms are small and the exhibitions have to be spread over four floors. It is such a labyrinth. I couldn’t imagine living here. There are parts restricted to the public, but, don’t worry about accidentally wandering into a strange area – there is plenty of signage around.

Every exhibition in the Museum feels very contained – each with their own theme that is explored in one room. This is heightened by the fact that almost every exhibition has a brochure available that covers the main theme and contains information on the objects on display. To name a few examples, there is an exhibition on anaesthesia, one on blood transfusions and another on radiology. These brochures are a great idea for visitors to either use when walking around, or, take home as souvenirs.

I do have to say one thing that I would strongly recommend the Museum re-consider – their labels. There is no consistency with the labelling throughout the entire museum. Some were A4 pieces of paper attached to the wall with edges peeling off. Something they should really look at addressing considering almost every visitor will look at them. 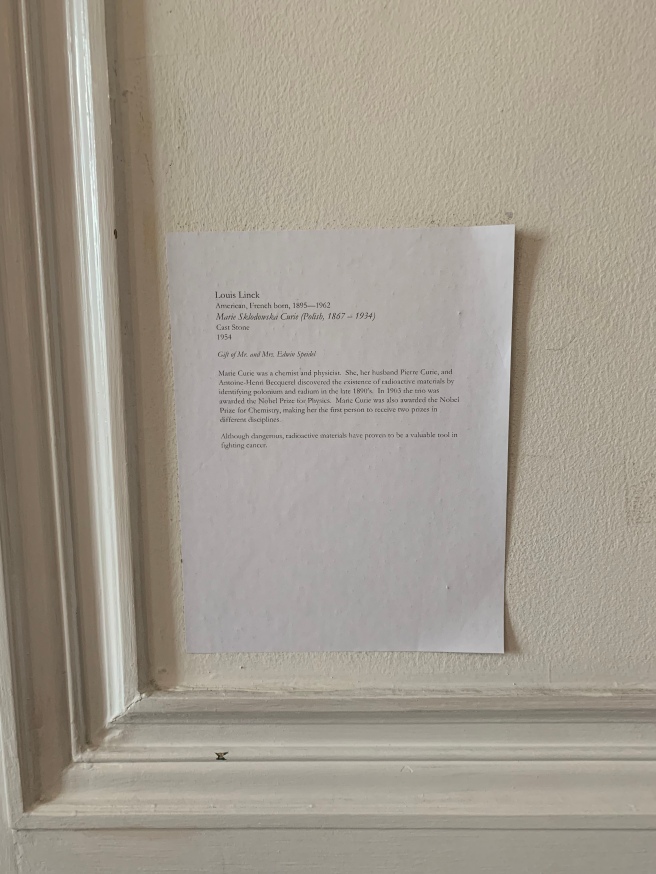 Although it was great to see some very familiar objects in the anaesthesia and radiology, my favourite theme was on anatomical and medical illustration. On display are old medical texts open to pages displaying the human skeleton.

Here is an example: 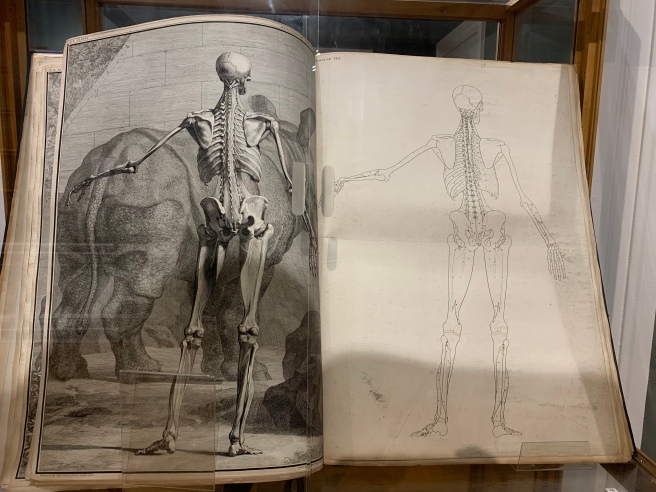 This image is by Bernhard Albinus, in collaboration with Jan Wandelaar, from around 1749. It is a very famous image depicting a skeleton posing in front of a rhinoceros. We know two things about the rhinoceros – her name was Clara and she was on a sixteen year tour of Europe. In other words, living her best life.

This room also contains a model of the first anatomical theatre located in Padua Italy. It has made me want to visit and see the theatre for myself. I can only imagine just how intimidating it would be to stand in the middle and look up at all the rows. 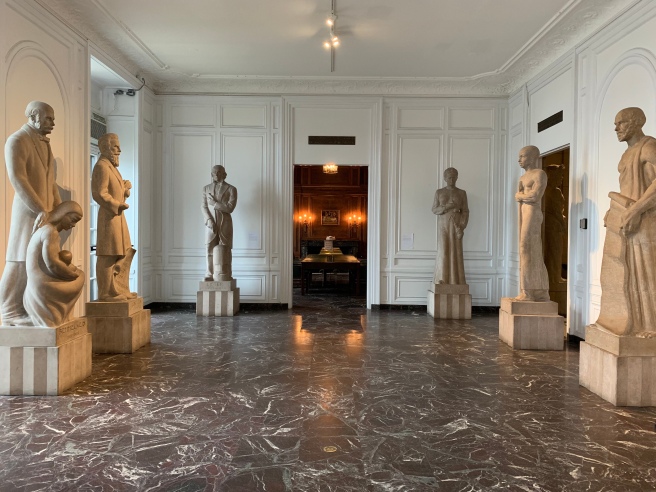 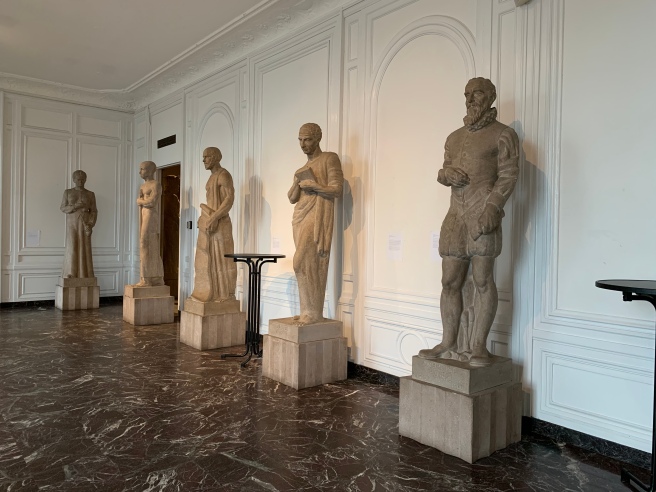 The Hall of Immortals is a permanent display containing large stone sculptures of figures deemed significant in the history of surgery. I was so glad to see one female represented, Marie Curie. Alongside Curie are Wilhelm Rontgen, Joseph Lister and Louis Pasteur. 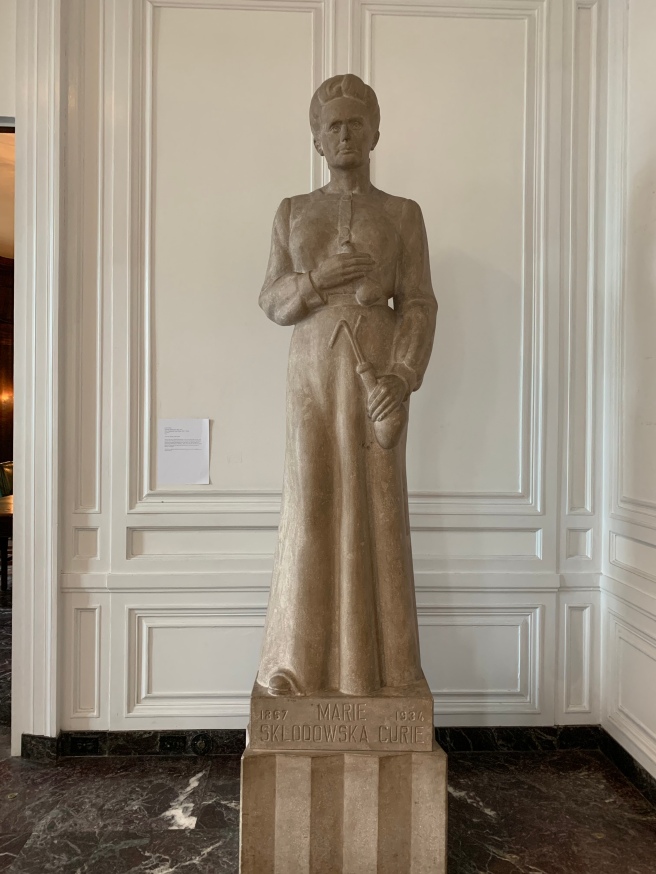 Behind each sculpture is a label providing visitors with a brief biography and the reason why they have been included. Going back to what I said before, out of everything in the Museum, these sculptures would benefit the most from an improvement to the labels.

There is no doubt that the Museum has an impressive collection of amputation kits. They pop up quite a bit in different exhibitions including nursing, anaesthesia and wound healing. I have included a couple of images below of kits that date back to the Civil War era. 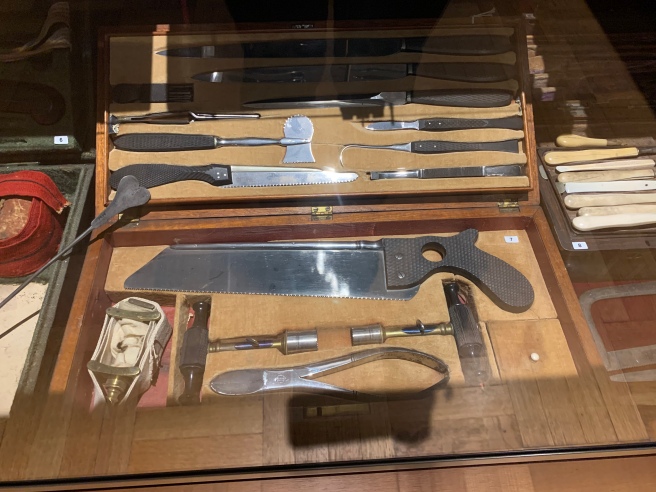 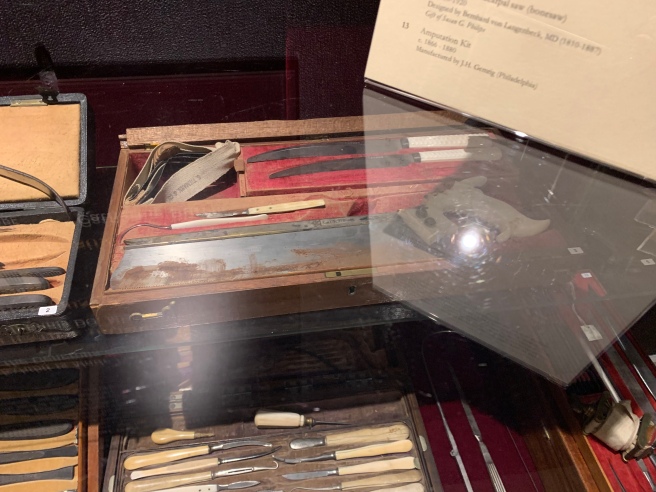 Another object that I love is this iron lung. The history of polio treatment is like something out of a horror story. Imagine being in this machine with just your head poking out as it essentially breathed for you when your muscles became too weak. 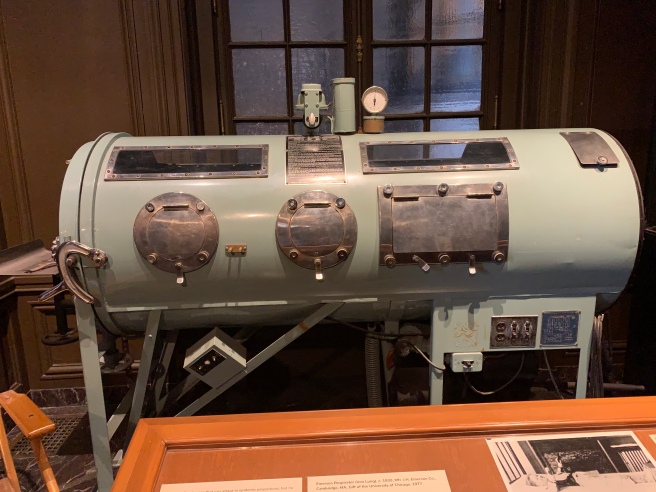 This blood transfusion device (on the left) dates back to 1665. Christopher Wren used such a device to inject medicines into dogs. Richard Lower continued Wren’s work with equipment inspired by this device and successfully transferred blood between two dogs. 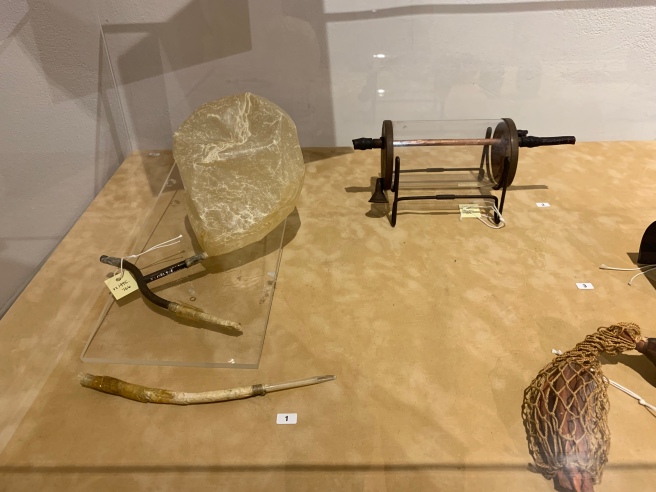 A collection of bladder, uterine, kidney and gallstones. 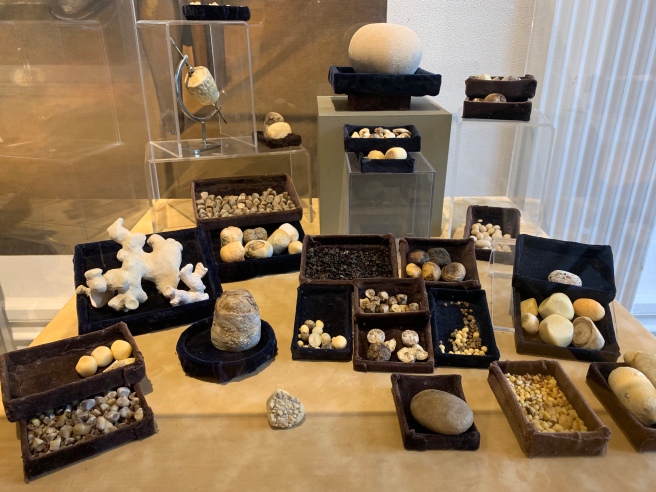 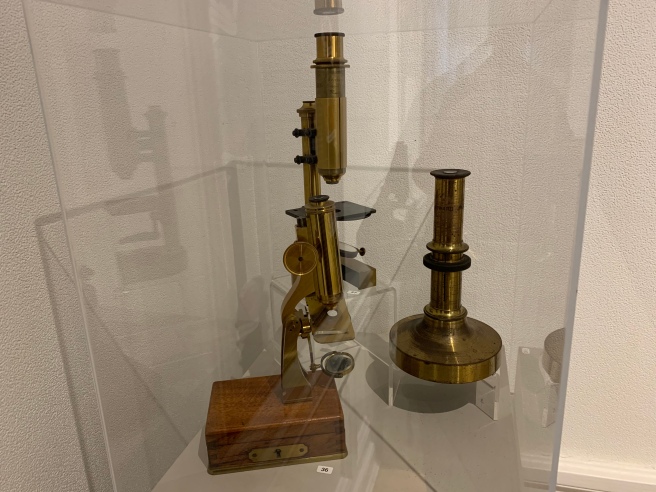 If you really want to read something that’s worse than fictitious horror, then read some early treatments for gynaecological issues. Seeing this gynaecological table used between the 1900s and 1940s is that much more terrifying after reading various descriptions of ‘treatments’ and ‘procedures’. 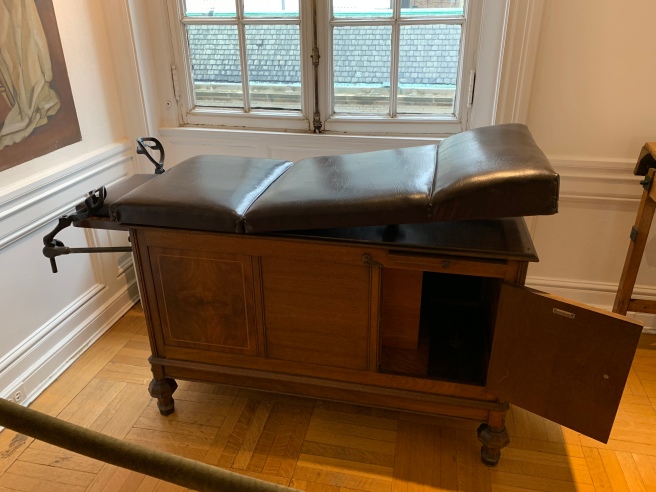 The International Museum of Surgical Science is open between 9.30 am and 5 pm on weekdays and from 10 am on weekends. It has a fantastic little gift shop. The museum is fully accessible and easy to get to on public transport (we went with route 151 that operates from the downtown area).