This evening I attended the opening of Second Sight: Witchcraft, Ritual, Power at The University of Queensland Art Museum. In 2015 I completed my Honours in history focusing on the memorialisation of the Salem Witch Trials in Salem and Danvers, Massachusetts. Needless to say, I have a very special place in my heart for anything to do with witchcraft. I was really looking forward to this exhibition and jumped at the chance to attend the opening.

Before entering the exhibition, there is a panel explaining why this exhibition has been curated and what it’s hoping to achieve. According to the panel, the historical etchings and contemporary artworks seek to depict or disrupt ideas of witchcraft. Whereas some of the historic pieces have quite stereotypical depictions, the contemporary works delve deeper into themes of gender, nature and sexuality, to name a few.

It worked really well not having the works displayed chronologically. Instead, as the panel states, the exhibition becomes less literal and more open to interpretation. If I were seeing purely historic artworks, I would argue the opposite and hope they would be displayed in some sort of chronological or geographical way.

There are guides available in most of the galleries that cover the whole exhibition. You need to pick one up. I say need because there are no labels accompanying the artworks. Although I did like the aesthetic of having no labels, I am absolutely useless with a map. It took me about 10 minutes to gain some sort of understanding as to where I was and what I was looking at. Thankfully I was with a friend who got the map straight away. I know I am not alone in my struggle.

The guides were great because they not only provided information such as artwork title, artist name, year, etc, but also, explanations of each artwork that were quite long and a short artist biography. While in the exhibition, or later, you can read all about the works on display in a lot more depth than a label would have allowed.

I would have preferred just the artwork title or artist name somewhere near each artwork. For those who don’t take a booklet, or those who take one but don’t read it, there will be little awareness.

I was expecting to only enjoy the historical etchings, particularly any by Hans Baldung Grien. A couple of years ago I researched and presented a paper on representations of the Witches’ Sabbath. There is a famous etching created by Grien depicting a Sabbath. I distinctly remember spending hours researching its context and learning a lot about Grien and his ideas of witchcraft. Seeing an original of his work was always going to be a highlight. I was surprised, however, that there were a few contemporary works I enjoyed viewing just as much.

This woodcut on paper has everything you could possibly want to see in a representation of a witch – including a sassy horse. It is believed that the witch, seen on the left of the image, has bewitched the horse and subsequently injured the man unconscious on the floor. It is definitely worth mentioning that art historians believe this is one of the first artworks demonstrating foreshortening as a technique, i.e. showing an object closer than it is or having less depth/distance. Yes, that definition comes straight from Google. 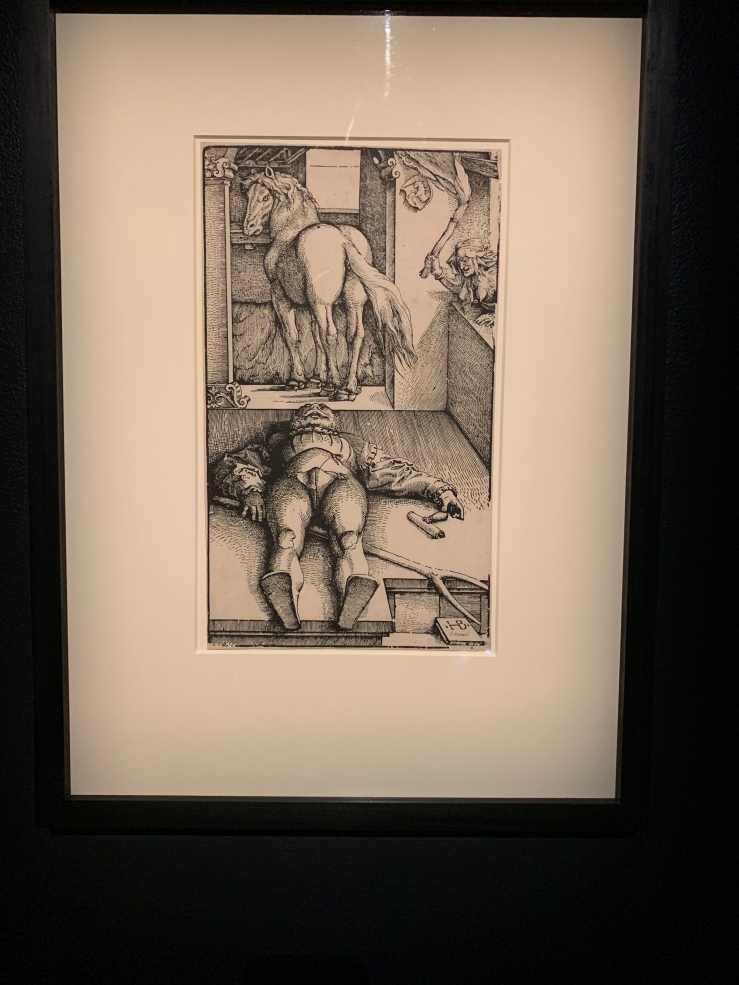 You would be quite surprised to see anything but a witch riding backwards on a goat. In this work, the goat is depicted as the devil creating all sorts of supernatural mischief. Surrounding the witch and goat are four cherubs holding symbols of witchcraft, including a thorn apple plant and alchemist’s pot. Dürer’s representation of a witch as a demonisied female character is one that has persisted and continues to have great influence.

This object is in the very first gallery and is alluring, drawing you into the space. It has been used in this context to mark a liminal space and prevent any evil from entering.

I had to include the artwork after which the exhibition is titled. Wright’s work draws on witch symbolism, especially that concerning nature. The three paintings were quite large and had great impact in the first gallery. 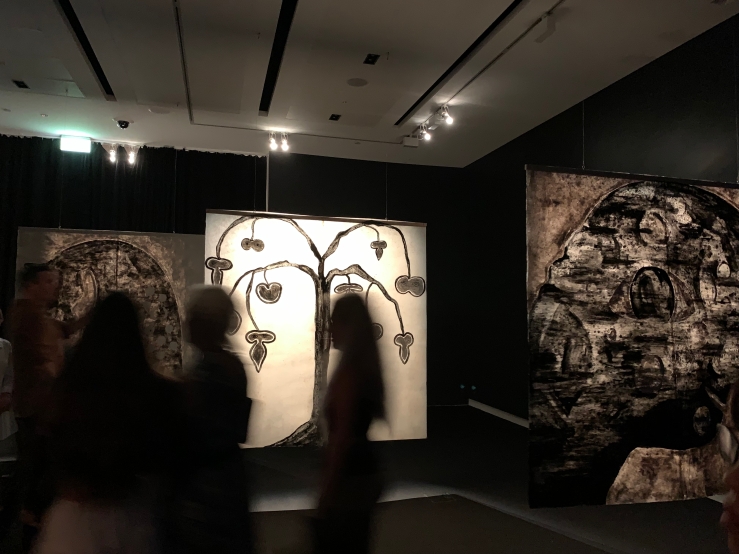 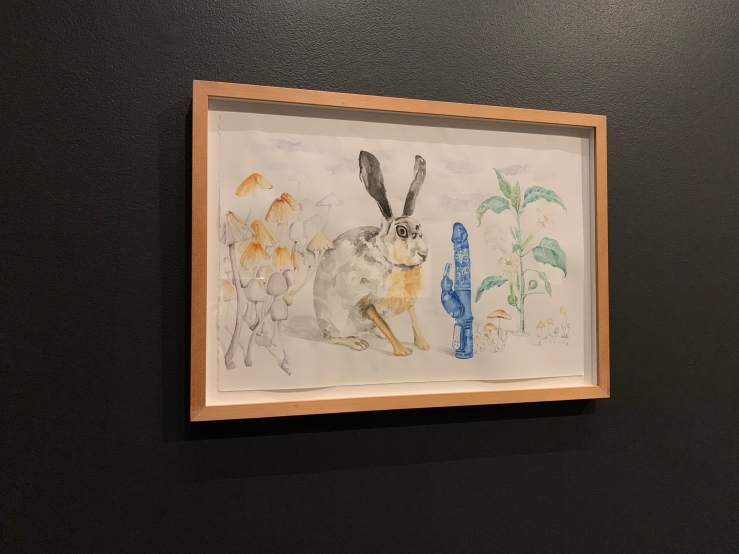 Similar to the works by Behrens and Haley, Hunt disrupts the stereotypical image of the witch and speaks to broader issues. The representation of the witch for centuries was led by male artists. Works by these female artists can provide a great opportunity to re-claim and explore fears about feminine sexuality.

One way Hunt achieves this re-claiming is by placing the figures in a more contemporary framework. For example, the use of the hashtag in her work acknowledges how powerful some contemporary symbols can be (thinking of the #MeToo movement). 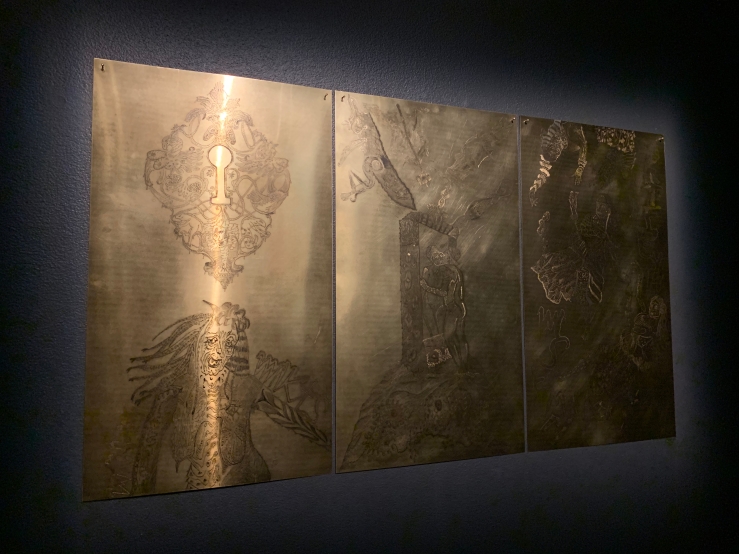 To finish, I just want to say that this was a fantastic opening. The gallery allowed for plenty of time to walk around the exhibition with no time pressure. Some openings I have attended focus a lot more on speeches rather than on a preview of the exhibition. Although it is nice to have speeches, I really liked how instead there was a performance. The entire evening was very organised and everything felt under control.

Second Sight: Witchcraft, Ritual, Power is on display at The University of Queensland Art Museum until 29 June 2019. The gallery is open everyday from 10 am to 4 pm (except Sunday and until 8 pm on Wednesday) and entry is completely free.