A huge thanks to Ziggy Potts for writing his thoughts on the new Star Wars exhibition at the Powerhouse Museum. Happy reading!

Being a massive Star Wars fan, one of the highlights of the holiday period was going to see the new blockbuster exhibition Star Wars: Identities, currently on display at the Powerhouse Museum. This exhibition was fascinating and a very enjoyable experience, revolving around the mythos of Star Wars and featuring many of the movie props from the entire franchise. It highlights a psychological perspective and interpretation of the material that I had not really considered despite being an avid fan since first seeing The Phantom Menace in 1999. Star Wars: Identities explores the characters and settings of the Star Wars Universe to reflect on and discuss the psychological aspects that make up our own personal identities. This leaves the visitor pondering questions of who we are and why we do the things that we do.

The exhibition begins with each visitor being handed a wristband and headset, both key to the full exhibition experience. Entry is timed to every half hour, ensuring that each visitor can experience the content at their own pace without being too distracted by other people. Once inside the exhibition, you are shown a brief introductory film explaining the context of the exhibition and how the wristbands are to be used at each of the ten wrist band activation stations. At these stations you are able to make your own Star Wars character and have it emailed to you at the end of the session. There are ten main themes within the exhibition: Origins, where we come from including Species, Genes, Parents, and Culture; Influences: the outside influences that impact our lives including Mentors, Friends and Events; and Choices: the lifestyle choices that shape who we become including Occupation, Personality and Values.

In terms of narrative structure, there is a strong sense of continuity, tracing how our identities build from birth, through adolescence and into adulthood. It covers how, despite similar upbringing and experiencing similar life events, people can have different reactions, depending on their personality. This thread is carried throughout the entire exhibition in the comparison of both Anakin and Luke’s journeys from Tattooine, meeting a stranger who opens up their world to the galaxy (Amidala and Ben Kenobi), to their reaction to loss and setback (falling to the dark side or staying true to the Jedi). This primary thread is clear, but, not too overstated, meaning those who visit just to look at the movie props can enjoy that without the psychological overtones. But, for those with an extensive knowledge of Star Wars, it provides an additional reason to see the exhibition (especially considering there have been two previous Star Wars blockbusters at the Powerhouse).

As a Star Wars fan, who also has a psychology background, this fostered in me a deeper appreciation for the source material and an even stronger analytical perspective that has only developed further since visiting. From a museum perspective, this exhibition has clearly met two of the key criteria for blockbusters – increasing visitation to the museum space and creating a positive and memorable experience that will likely increase awareness of and repeat visitation of the institution at large. 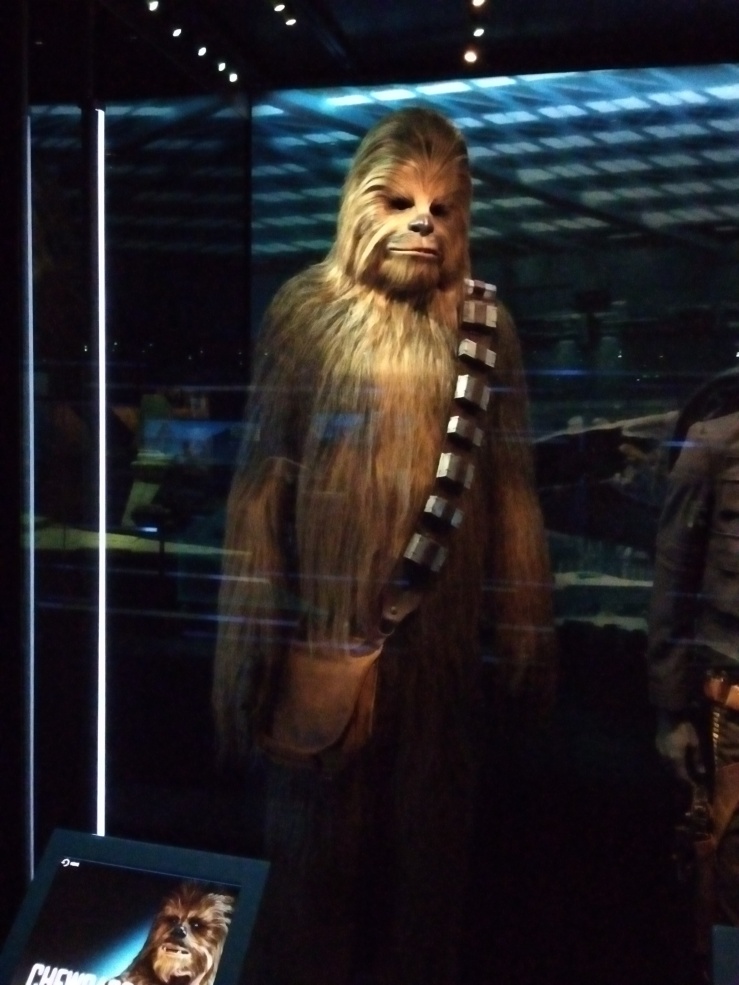 In terms of the physical layout, each of the themes is clearly marked by an introductory wall panel exploring how the theme relates to identity. The space is fairly open with display cases dedicated to specific costumes and movie props that link back to the theme, as well as short videos on loop that more explicitly link the psychology to Star Wars. For example, the ‘Occupation’ section centres largely around Padme Amidala with a plinth showing her Queen costume from Episode 1, senator outfit from Attack of the Clones and the dress she wore when the Emperor rose to power at the end of Revenge of the Sith. The only slight drawback here is that the video is motion triggered within a designated area. If you step in mid-clip, you have to wait until it loops back to the start to get all the information. The motion triggered area is also quite small, so, despite the staggered entry, if people are slow to move through the space, it could detract from the experience.

Some of the key objects on display from the Lucasfilm Archives include the original eyes from Jabba the Hutt in Return of the Jedi and a display case depicting, for the first time, the full evolution of the Clone Trooper, Stormtrooper and First Order armour sets complete with a full sized Boba Fett. I also enjoyed the long display case filled with many of the spaceships and vehicles including the Mon Calamari Star Cruiser, AT&T, Rebel snowspeeder and X-Wing Starfighter. The only slight drawback here is that the background sound effects from the display case negatively affects the nearby video.

I also greatly enjoyed the ‘Values’ section, containing one central plinth with the costumes of Mace Windu, Plo Koon, Obi- Wan Kenobi and Luke Skywalker all displayed together. In a throwback to high school English, when I analysed ‘The Matrix’ as part of The Hero’s Journey, I learned the meaning behind the introduction of darker colours in the costumes of both Anakin and Luke. Anakin’s robes were representative of his impending fall to the dark side, and the dark colours of Luke’s costume was a distinct visual link between Vader and Luke.

Finally, at the end of the exhibition, the choices you have made throughout in terms of Origins, Influences and Choices culminate in choosing either the Light or the Dark Side and finalising your character which you can then email yourself as a reminder of the experience. Overall, the wristbands worked perfectly and there were no issues. The only slight problems I can think of were only being able to choose one mentor (as we are each the product of many people), and the fact that if you are going through the exhibition by yourself you have no friend to link up with at one of the stations and this affects the end character profile picture.

Unfortunately, as what happens with big exhibitions, some of the movie props are not exhibited here including Anakin’s podracer, due to its size, as well as Darth Maul’s costume. There are also some objects that were not included and sent back due to conservation issues, namely because they had reached their time limit for continuous display.

Notwithstanding this, there are also three showcases outside the main exhibition displaying collectables from the original trilogy, collected by Mike Sarantos, presented alongside his personal story. This helps to incite interest in the exhibition for those generally visiting the museum, while demonstrating the strong influences the franchise has had on generations of people that have made collecting memorabilia their main passion and forms a cornerstone of their identity.

Overall, Star Wars: Identities does a fabulous job of presenting and contextualising the mythology. No matter your previous history with the franchise, you can enjoy the exhibition and learn something about yourself. This is along with the usual enjoyment that comes from seeing original movie props and learning about the development of one of the most successful franchises in history. Star Wars: Identities is currently showing at the Powerhouse Museum until 10 June, 2019.

Male Zabrak
I was raised on the lush planet Naboo, where members of my community made their living working as landscapers at the planet’s many cultural heritage sites. On holidays my best friend and I would traditionally wander through the art galleries in the city of Theed.

My parents required discipline from me but gave me support when I needed it, and I inherited my strong set of intellectual abilities from them. Later on I spent some time with the great leader Padmé Amidala, whose guidance left me with knowledge I still use every day in my job as a merchant.

I remember this one time when I won a Podrace, and my reward was my freedom from slavery. I didn’t let this affect me too much, though; instead I struck out in my X-wing to explore the edges of the universe.

People often tell me I’m a generally organised and prepared person, I also tend to be adventurous and curious. But the most important thing to me is achievement: I believe that excellence deserves recognition and respect.

I have pretty strong powers with the Force; I guess that’s why the Emperor came looking for me. When he offered me limitless power in exchange for my allegiance, I fought the urge to join him and his evil minions and rejected his offer.

Thank you Ziggy for a great blog post! What an interesting way to display the Star Wars Universe.