When I first heard about this exhibition I thought wow, the Australian singer Nick Cave has an exhibition opening at Carriageworks! I soon discovered that there is also an American artist called Nick Cave. Just goes to show I do not operate in the world of contemporary art. Thank you to the other people out there who thought the exact same thing and have made me feel much less foolish.

Nick Cave’s first collection of works, titled Soundsuit, were created in response to the beating of Rodney King in Los Angeles. The artworks are made from a variety of mediums including fabric and twigs. Their aim, to highlight social justice in a way that is both empowering and confronting.

In his new show, Until, Cave again looks at the idea of social justice addressing issues such as gun control, race relations and gender politics. Although this is achieved through large scale sculptures, Cave also wants the exhibition to be a forum where important issues can be freely discussed.

The exhibition comprises of sculpture installations and a few digital works. We decided to focus on the sculptures and skip the digital displays. I thought the layout of the exhibition worked well, however, there was one major problem that I’ll talk about a little later. Here are four of the sculpture installations in order of their layout (starting with the closest to the entrance).

When you first enter the space, it is really hard to miss the 1 800 hanging mobiles spinning around. They have been created from spinning garden ornaments and are truly quite mesmorising. At first glance, they look innocent enough – a group of mobiles spinning in the light breeze. However, some have images of guns, bullets and tear drops in their centre. According to the catalogue, this installation aims to be playful-looking from afar, yet filled with messages of gun control and gun violence when viewed up close.

This is the installation that had a layout issue. There were some pretty clear paths created to walk through the forest, however, visitors were constantly going off grid to take photographs. The front of house staff were constantly having to run and tell people to stay on the path. Maybe if there was some kind of small barrier that didn’t look too intrusive it could save multiple headaches. 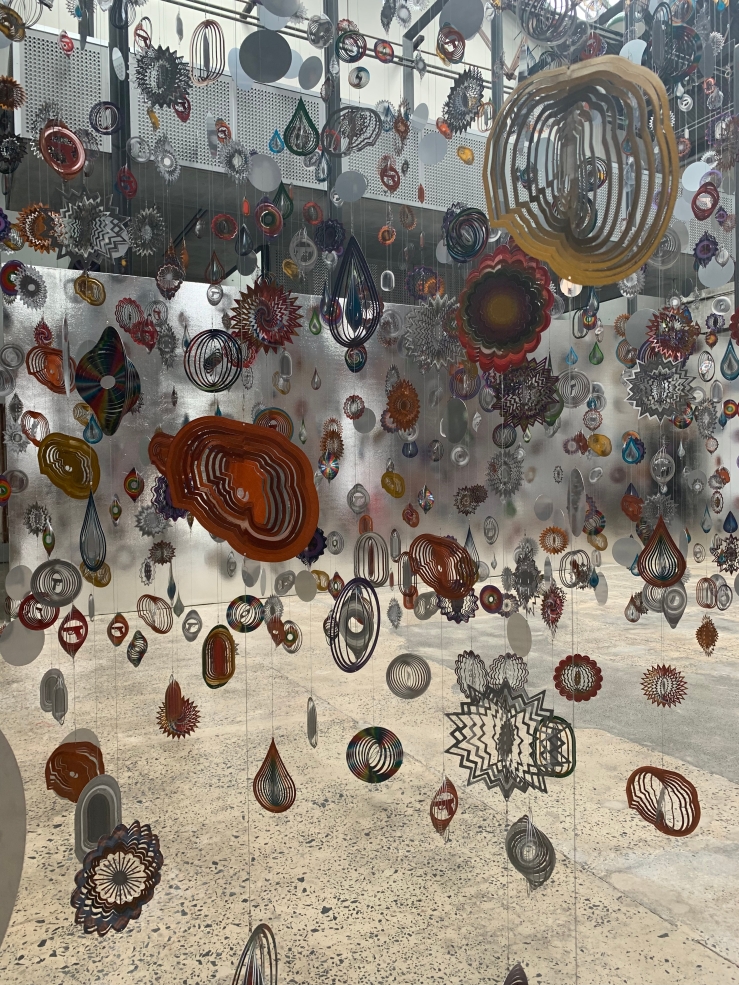 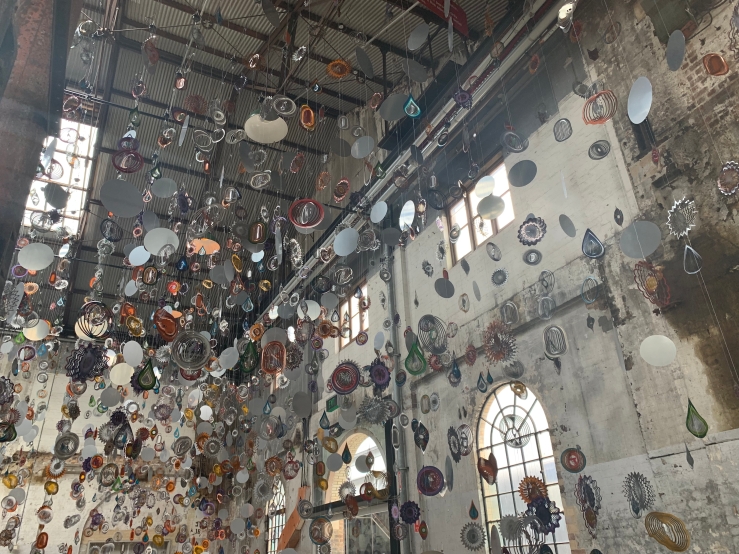 This was such an incredibly beautiful installation. Thousands of crystals and a few chandeliers were transformed into a crystal cloud. It was amazing to stand beneath and look up.

As well as the crystals, there were four large yellow ladders leading to viewing platforms above the canopy. I decided not to climb the stairs because it was unbelievably hot in the exhibition space and I didn’t want to pass out. From what I could see, it looked as though thousands of little porcelain figures and random bits and pieces from vintage shops had been stuck together. After reading the cataologue, I learnt that integrated into the display are a selection of racist memorabilia collected by Cave over the years. There are sixteen ‘Jocko’ garden figurines that are caricatures of African Americans. Cave wanted these figurines in the work to play the role of messengers and keepers of past memory. The fact they have been included disrupts the sort of beautifully aesthetic cloud and forces visitors to come face to face with difficult histories. 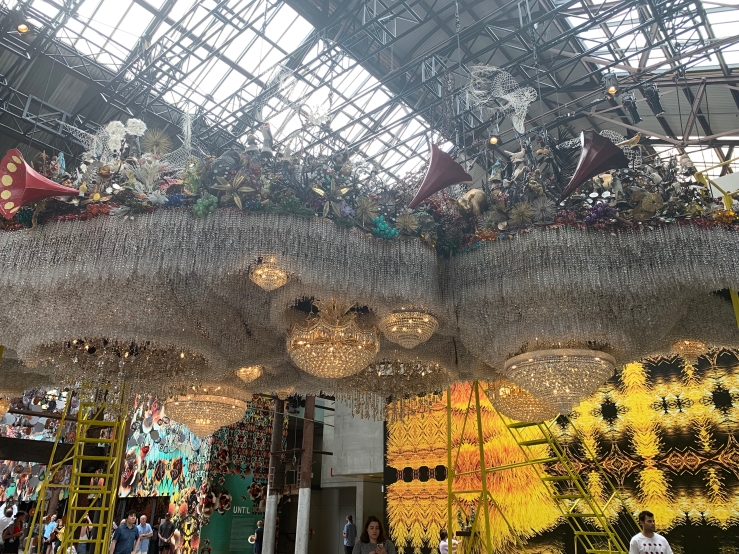 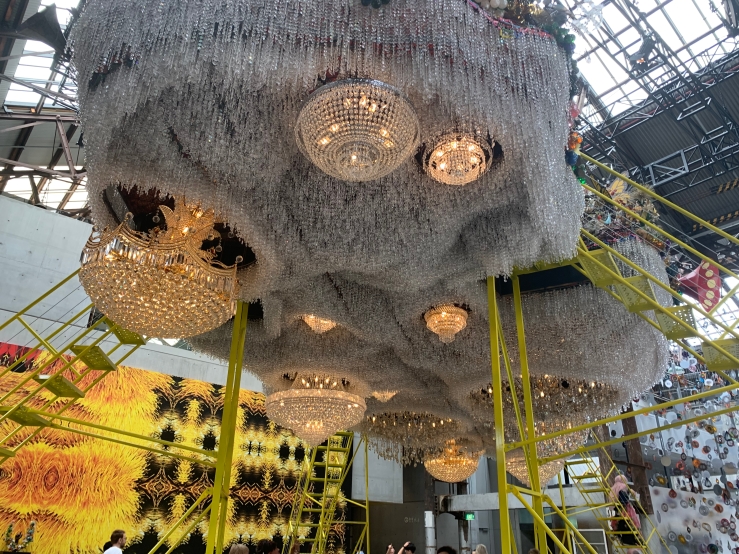 I really enjoyed this installation because it basically consisted of blue/silver tinsel and fans. Considering it was so hot, the fans were a very welcome addition in the space. This artwork looks at how oxygen and water are healing properties and invites visitors to stop and take a breath before moving on. 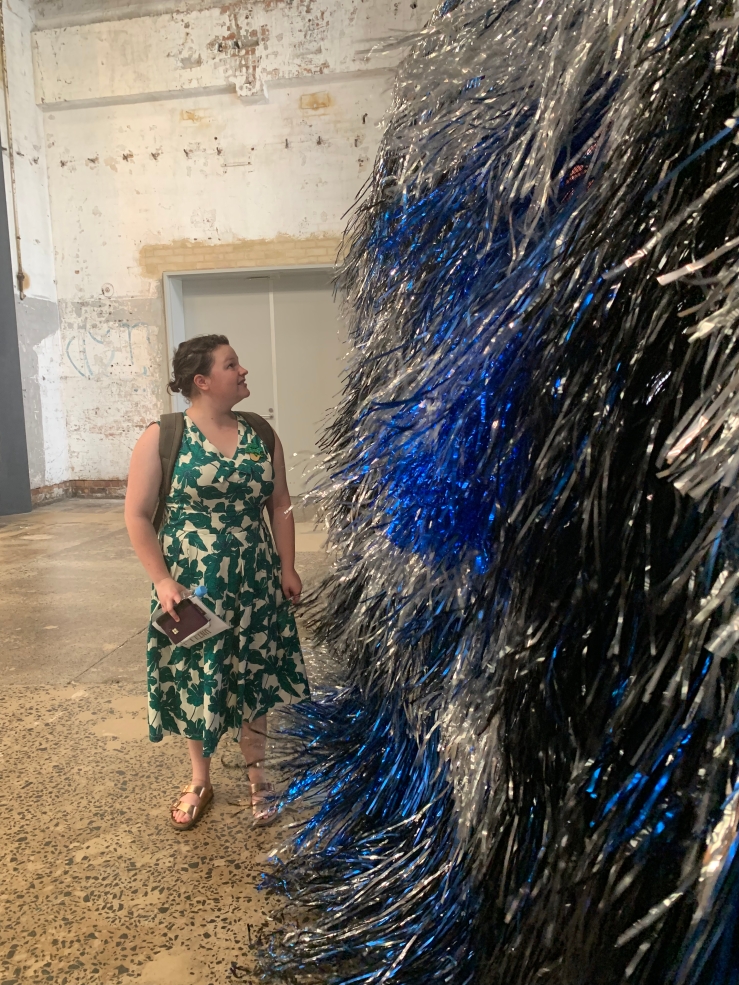 This was an impressive installation that took Cave and 12 studio assistants 18 months to create. There are millions of plastic hair pony beads threaded through shoelaces and woven over industrial cargo netting. Throughout the work are words, such as ‘power’, and symbols, such as the rainbow, incorporated.

I like how the installation is described as reminding visitors that the whole can be greater than the sum of its parts. So, by joining all these little individual beads together, Cave has been able to create something powerful.

Until is on display until 3 March 2019 at Carriageworks. Entrance is free and the exhibition is accessible. Please note that the display area does get hot in summer so try to avoid the middle of the day.