In the late 1960s to early 1970s, Frank Corley drove around almost every suburb in Brisbane taking photographs of as many houses as he could. Eunice Corley, his wife, developed these photographs in a makeshift darkroom. The photographs were then handed to salespeople who would try and sell homeowners a special photograph of their home packaged in a cardboard calendar for 85 cents. It is estimated, in today’s money, that this could have been a million dollar enterprise. The photographs that were not purchased, approximately 60 000, were kept by Frank until his passing then donated to the State Library of Queensland.

The photographs have been sitting in archival boxes for years, used occasionally by history groups and for specific research purposes. It wasn’t until a couple of years ago that the decision was made to make these images public and curate an exhibition to showcase what is in the collection.

This unbelievably rich photographic archive of Brisbane is, I’d argue, a significant cultural heritage collection. Think about the history these photographs captured, the stories they can tell. Now imagine uploading these images to an online platform and capturing hundreds of stories from people who once lived in a particular house or who had a special connection to a neighbourhood.

I mention this because accompanying the physical exhibition, Home: a suburban obsession, is an online platform where people can identify houses and add their stories or personal photographs. As soon as I heard about this, I jumped online and tried to find my house. Unfortunately, it wasn’t there. But, I spent quite a bit of time going through some of the photographs and reading their associated stories. People are genuinely placing their heart and soul into this project.

So visiting this exhibition I was immediately emotionally attached. For me, it was wonderful to see images from the past in suburbs that I frequently visit today. I couldn’t stop myself from seeing the exhibition with all this personal baggage.

Even if you’re not from Brisbane, there is plenty to appreciate in this exhibition. There were a few features of the exhibition that I thought would appeal to a wider audience than simply those visiting to discover more about their home city. There were also a few positives regarding exhibition design and layout which I’ll include in the list.

1. Scope of the photographs

Just the concept itself is fascinating – someone drove around before Google was a thing and basically Google mapped huge parts of Brisbane. It’s remarkable to see the volume of photographs captured and what they can reveal outside of simply what architectural styles were popular (I’ll touch on this later). Whether you like architecture, history, cars, streetscapes or art, there is really something for everyone in this exhibition.

In the middle of the exhibition space is a virtual reality installation. Wearing a headset, visitors are guided down a street in Brisbane with an image of the street today overlaid with photographs from the Corley collection. It is a nice way to actually show the pairing of the past with the present. Hopefully, down the track, the State Library may consider a project that allows visitors to download an app and take this experience outside.

The exhibition was held in quite a large room with content covering all walls. In the middle, there were a few bits and pieces including a large wall projecting new additions to the online platform and the virtual reality experience. Having this space in the middle allowed the exhibition to not feel so cluttered. It was a great move considering the walls were absolutely filled. I like to think you always need some breathing space in an exhibition. It would have been nice to have some seating in here but I’ll get to that later. 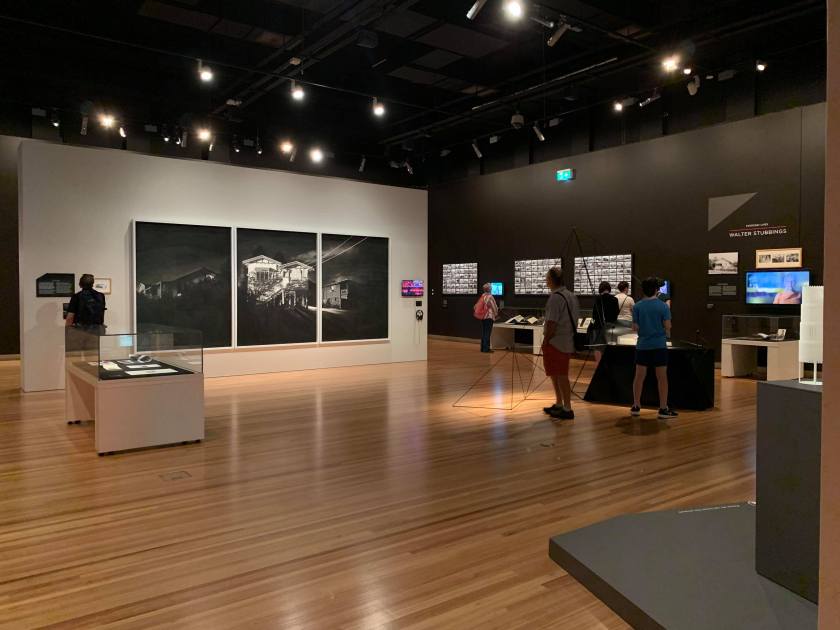 When you first walk into the space there is a huge wall covered in approximately 10 000 photographs. As the Curator stated in the talk we attended, this should make you feel how he did when he first saw all the photographs, overwhelmed. I was wondering how exactly these images were going to be displayed in the remaining exhibition space. For obvious reasons, it would be problematic displaying all 60 000 images on the walls.

Instead, I really enjoyed how they decided to display some of the photographs. Alongside objects in cases (including one of the photographs in a calendar) and interviews that played on television screens, were photographs grouped in sets of 48. Each group had a theme. For example, my favourite was “Open Windows”. All 48 photographs showed houses photographed with open windows (surprise, surprise). What I loved about this was the interpretative label alongside that highlighted issues of climate, home occupation and security. 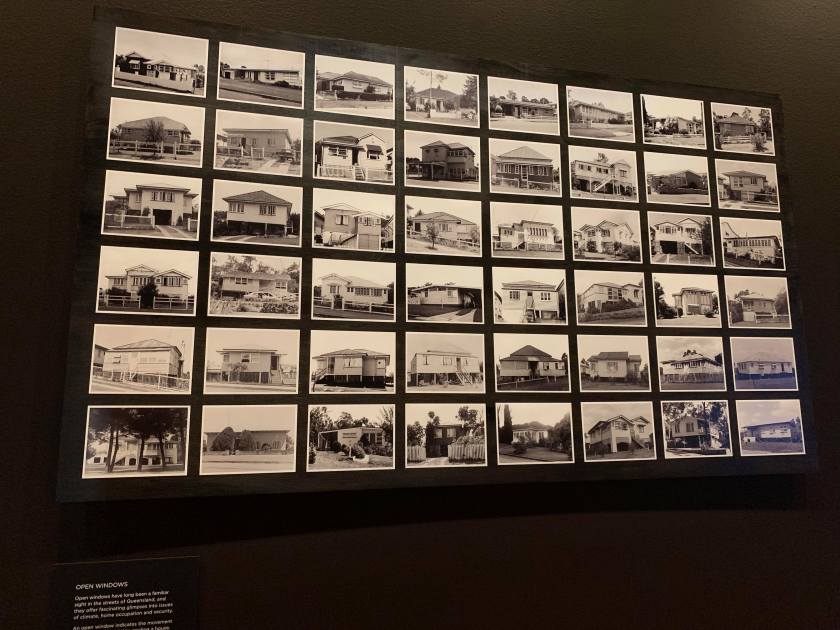 While there was quite a lot that I enjoyed about the exhibition, there were a couple of points I have to make.

1. No white writing on black walls

This may not bother some as much as it does me, but, I cannot stand white writing on a black background. It is eye-straining. I get what they were trying to do – replicate the black and white theme from the photographs. It was, however, difficult to read.

2. Long videos with no chairs

There was one video in particular that showed Brisbane during the 1950s. It went for approximately 10 minutes. Considering this exhibition is appealing to a broad audience, it would have been nice to consider seating options for movies that run for this length of time.

Apart from these design issues, I thought that the exhibition was well-curated. I really hope that the technology doesn’t fail because it does have a lot to add.

I mentioned before that we attended a talk attached to the exhibition. This was basically an introduction to the exhibition featuring Denis Peel (Annerley-Stephens History Group Inc.), Gavin Bannerman (Director of Queensland Memory) and Adam Jefford (Curator). 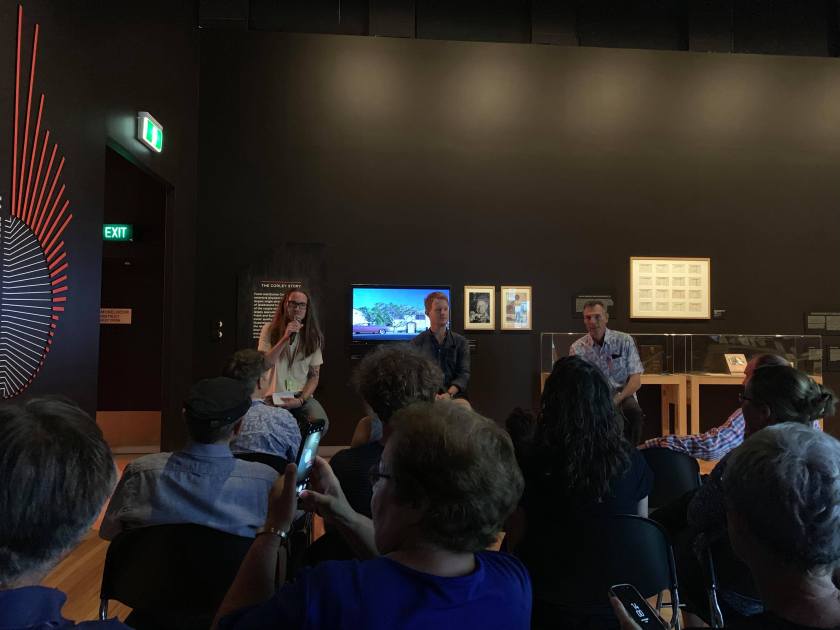 Overall it was a pretty good discussion mainly relying on audience member questions which can be a little risky. It would have been great to hear more from Denis Peel about how the Annerley-Stephens history group contributed to the exhibition and organised some of the information and interviews.

Still, it was interesting to hear about the background of the exhibition and online project and how they’d like the exhibition to develop, i.e. creating a repository of stories on the online platform.

There are a few other workshops and talks associated with the exhibition that I hope to attend. I cannot fault the range of public programs that are accompanying this exhibition – they’re fantastic.

Home: a suburban obsession is on display until 14 July 2019. To access the online platform click on the link here.