The history and evolution of tattooing is fascinating. Originally reserved for criminals, now it is estimated that approximately 19% of Australians have at least one tattoo (source). As I find this particular topic very interesting, I was excited when the Museum of Brisbane released tickets for a public program titled Convict Tattoos: Skin Stories. This program was held in conjunction with their new exhibition Life in Irons, the men and women of the Moreton Bay Penal Colony. The following blog post will provide some convict context before focusing solely on the talk.

To simplify a really long, complex and interesting story, convicts were not initially sent to the Moreton Bay Penal Colony, now modern-day Brisbane. In 1824 the decision was made to establish this colony as a place of secondary punishment for hardened criminals. Numbers fluctuated from around 947 convicts in 1831 to 374 before it was officially closed in 1842. When the colony closed, Queensland was then opened to free settlers. 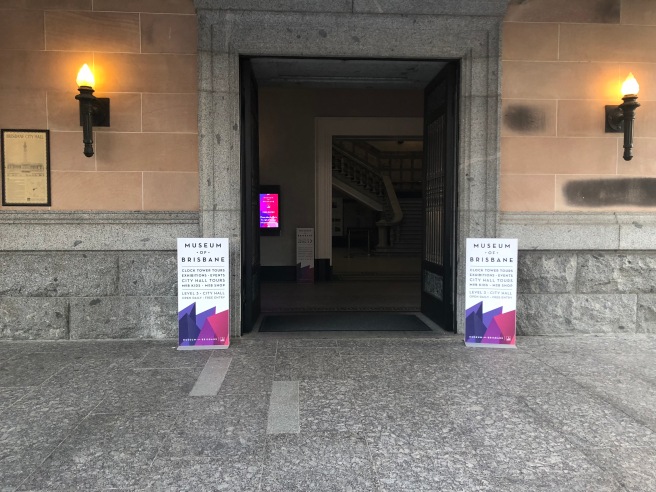 Amazingly, quite a few sources from this time period have survived allowing for great insights into the people who were sent to the colony and the nature of their crimes. If you head on down to the Queensland State Archives you can view the Chronological Register of Convicts at Moreton Bay. In this register you can see the names, ages and physical descriptions of the convicts. The architectural drawings and archival records of the colony were digitised in 2012 and listed on the UNESCO Australian Memory of the World Register.

Before moving to Sydney, one of my many roles was guiding people around Brisbane pointing out convict-related sites. Today, only two buildings remain from this era, the Old Windmill and the Commissariat Store. The latter is a museum that tells the story of the Moreton Bay Penal Colony.

I hope that little bit of context has helped set the scene. If you would like to read more about the Moreton Bay Penal Colony, aka where I got my information from, I will include a short list of references at the end of this post.

When we arrived at the Museum of Brisbane, we had the opportunity to quickly look through the Life in Irons exhibition before settling in for the talk. There were two speakers: Dr Jennifer Harrison and Clare November Miles. Harrison is a honorary research fellow with the University of Queensland focusing her studies on early Queensland history. Miles is the owner of Painted Ladies Tattoo in Holland Park and a high school visual arts teacher. Miles has also published a book on the first female tattoo artists in Australia.

Rather than having one person present followed by the other, the talk seemed to naturally flow between them. Harrison would provide some information on the convicts before asking Miles for an insight into modern-day tattooing. So I don’t ramble on and on, I’m going to provide a brief overview of the information both speakers covered.

Harrison focused her talk specifically on the Moreton Bay Penal Colony convicts. I was particularly interested in learning about the available source material that sheds light on convict tattoos. Specifically, is it all written evidence or are there drawings etc depicting the different tattoos? According to Harrison, when convicts left the colony there was a short physical description that accompanied their name written in a log book. As tattoos were quite a clear physical trait, they were included. Depending on the complexity of the tattoo, sometimes little pictures were drawn in the book.

Harrison covered the most common types of tattoos, where they were located, and who usually performed the tattooing.

Most common types of tattoos – flower pots (Harrison’s research has not been able to determine exactly what this symbol represented), wedding rings, anchors, wreaths and initials

Where they were located – almost exclusively on the arms

Despite the fact that we know the different types of tattoos, Harrison highlighted that we don’t know for absolute sure the meanings behind the symbols. Apart from the flower pots, the other types of tattoos have some generic meanings ascribed. The anchor, for example, could have been a symbol of hope, or tattooed onto the arm of a convict after crossing the equator. The initials were more than likely those of family or friends left behind in the United Kingdom. There is evidence to suggest that convicts were already tattooed before boarding the ships to Australia and before arriving in Moreton Bay. Harrison also spoke of two female convicts who were registered as having had tattoos. 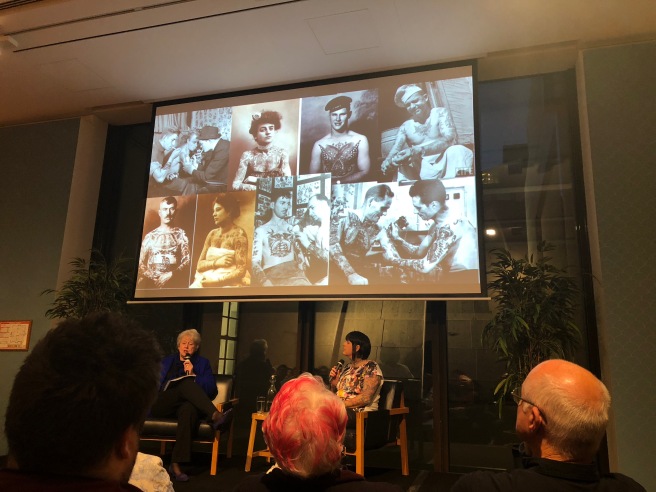 One part of the presentation that I really enjoyed was actually hearing about her tattoos. It was obvious that a lot of thought had gone into the placement and selection of tattoos as well as their meaning. They were incredible works of art and clearly reflect different aspects of her identity.

It was fascinating to hear about how the nature of tattooing has transformed. In particular, the fact that in the last few years, tattooing has grown in popularity amongst young females. What Miles was saying really corroborated this idea of transforming cultural and societal perceptions of tattoos.

Question time was not at all what I had predicted. The majority of questions were directed at Miles and included ‘is it ok for people to stare at heavily tattooed people’ and ‘where hurts the most when getting a tattoo’. Miles stated that yes it is ok to stare and one of the most painful places is behind the knee (ouch ouch ouch).

It was a great question time and, shock horror, actually had questions and not statements masquerading as such. The audience seemed genuinely interested in learning more about modern day tattooing procedures.

I won’t be reviewing the exhibition as I really didn’t have a good look at everything on display. Life in Irons is on display until 28 October 2018. Surely I will have some spare time to return and have a closer look. Considering the architectural plans and archival materials on display are probably not going to be displayed again, I think I will make returning a priority!