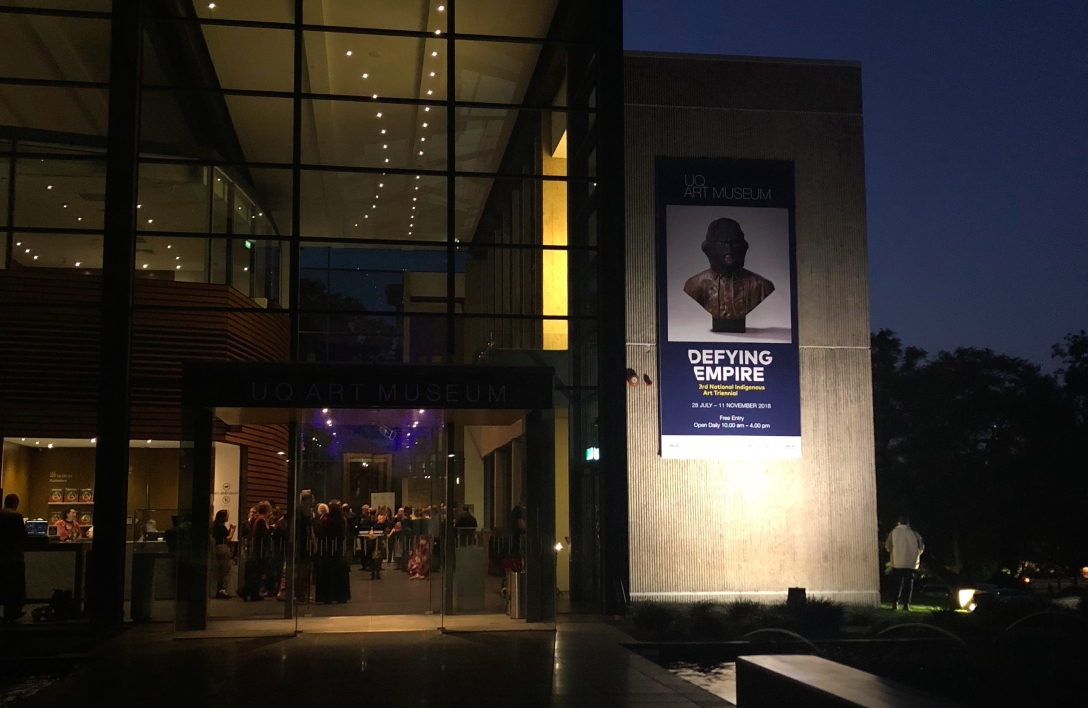 On Friday night, I was fortunate enough to attend the opening of Defying Empire: 3rd National Indigenous Art Triennial at the University of Queensland Art Museum. This exhibition has travelled from the National Gallery of Australia where it was on display in 2017. The evening was well-structured and it was fantastic to see so many people in attendance. I am going to focus this post on the evening itself with only occasional references to the art on display. I will also note here that photography is not allowed in the exhibition due to copyright issues. For this reason, there will not be many images throughout the post.

In total, the exhibition consists of works from thirty contemporary Aboriginal and Torres Strait Islander artists from all around the country. Each artist has one work on display, meaning there is a mix of messages and stories as well as media types.

The main aim of the exhibition is to commemorate the 50th anniversary of the 1967 Referendum that recognised Aboriginal people as Australians for the first time. Artists were able to respond to the Referendum itself, or, create works that reflect on broader themes and the long-lasting effects of invasion. On display are works that look at issues of identity, racism, displacement, nuclear testing and the stolen generations.

To understand the crux of main aim of the exhibition, I am going to quote Tina Baum (Larrakia/Wardaman/Karajarri peoples), Curator of Aboriginal and Torres Strait Islander Art at the National Gallery of Australia.

“We defy: By existing; By determining our identity; By asserting our histories; our culture; our language; By telling our stories, our way; By being one of the oldest continuous living cultures in the world.” (reference)

It is always interesting to see how a particular institution decides to conduct their opening nights. My friend and I arrived at the Gallery around 5.50 pm for a 6.15 pm start. If you’re wondering why I’m boring you with arrival times, you’ll see why in a minute. Anyway, as soon as we walked through the doors, we were made to feel quite welcome by Gallery staff. At around 6 pm, we were notified that a short Curator’s tour of the exhibition was about to take place.

If we had arrived closer to the official starting time, we wouldn’t have had the amazing opportunity to be a part of this tour. I am a huge fan of tours in cultural institutions as a way of sharing the more ‘behind-the-scenes’ information and also as a way to orientate you as a visitor.

As we walked through the exhibition space, one thing that really stood out to me was that each space was very well balanced. Large works complemented each other and smaller works were presented in a way that meant they weren’t lost on the walls. The first work you see entering the space is Assimilated Warriors by Karla Dickens (Wiradjuri people). This work consists of a series of fencing masks that reflect the battle for soverignity and rights that occured in the lead up to the 1967 Referendum. It also comments on how these battles continue.

This work was balanced on the opposite wall by Untitled by Daniel Boyd (Kudjla/Gangalu peoples) and nguram-bang-dyuray by Jonathan Jones (Wiradjuri/Kamilaroi peoples). Untitled is a huge canvas work depicting the murder of Captain Cook whereas nguram-bang-dyuray consisted of a series of 19th century prints that had been etched with traditional Aboriginal designs. Themes of identity and reclaiming history prevailed.

After the speeches and the official opening, we were able to revisit the works on display and have a closer look. I was very glad to see that there was some crowd control happening at the entry to the exhibition space. Especially considering there were around 400 people at the opening. 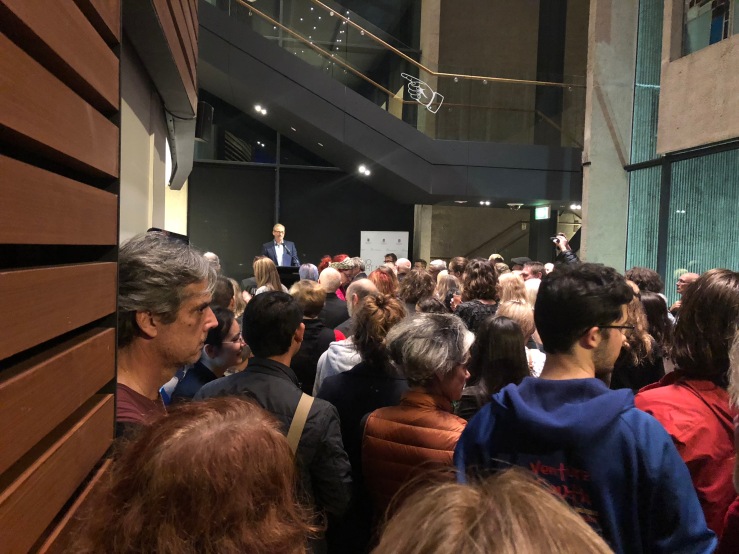 Defying Empire: 3rd National Indigenous Art Triennial is an incredible show that displays the diversity of Aboriginal and Torres Strait Islander art and a multitude of messages that can be conveyed through various art forms. It is a powerful exhibition and one I definitely recommend seeing. Defying Empire is on display at the UQ Art Museum until 11 November 2018.