If you were born and/or raised in Australia during the last 50 years, you are probably very familiar with Play School. Personally, it played a huge role in my childhood, teaching me shapes, colours, songs, etc. I really wanted to see this exhibition when it was at the National Museum of Australia in Canberra last year. Unfortunately, I never had the chance. Luckily, it came to a gallery near me!

I only had one expectation – I wanted the exhibition to be fun and nostalgic. I was hoping for a balance between activities and labels for kids and information for adults. In short, the exhibition did achieve this goal. Spread over two rooms, you can categorise room one as the more informative room and room two as the room for kids. I will go into more detail later, but, I really want to focus on why it was a successful kid’s exhibition that wasn’t just designed for kids.

As soon as you step through the doors you are transported into the world of Play School. One of the first display cases you see contains Little Ted, Big Ted, Humpty and Jemima. I immediately went to this case first. After I got seeing the toys out of my system I began to methodically read the labels starting with the introductory panel positioned near the entry door. It was a very short panel, but, stated the aim of the exhbition – to celebrate 50 years of Play School. I found it to be quite light on any kind of information so I was pleased to see one of the first thematic panels explored the history of Play School in more depth.

This panel was printed onto a yellow balloon-shaped board, but, was clearly directed at adults. The language and height gave this away. This is, however, what I really enjoyed about the exhibition. Even though it was a label for adults, it still was fun and had a whimsical feel about it. I was surprised to read that Play School was originally a BBC program in England that was adapted for Australian audiences. As the label states, it became “distinctly Australian” and “has continued to evolve.” I remember learning so much about native flora and fauna from the show!

Now moving onto the toys. They were on display with party hats, sitting next to plates of food including a large cake. Considering the theme of celebration, it was a very apt way to display all of these beautiful childhood favourites. Still a Big Ted fan for life! The labels for the toys were directed at children which was fine by me. I would imagine that adults just want to enjoy their time viewing what feels like a group of old friends.

Turning away from the toys, you come face-to-face with the Play School windows. The arch, round, and square are all there on display. These particular windows were introduced in the 1970s. At the risk of sounding like “things were better in my day” the animated windows that appear on the show today don’t cut it.

Finally, another highlight object was the Rocket Clock. In the show, the clock would light up and rotate to reveal a diorama for the day. The one on display was a diaroama of Mt Fuji. Similar to the windows, the labels were designed for adults providing a snapshot of information. If they had been any longer, I think it would have proven to be distracting in the exhibition space.

Before exiting the space into the mid-way placed cafe, there was a large board displaying photographs and information on presenters. We spent so long looking at this board trying to remember the different presenters and who were our favourites. The number of Australian television and movie stars who have appeared on the show is so high. There are some excellent photographs and quotes to keep you occupied.

That basically concludes the section of the exhibition designed for adults, but, would engage kids. The second room is filled to the brim with activities including a storybook area and a table to make a rocket. There were some digital iPads that didn’t seem to be working. I found the activities that weren’t digital to be what looked most engaging and I really hope kids take the time to get away from the iPads and go old school Play School.

There were two highlight areas in this section that adults could enjoy. The first was an original banana in pyjama without its twin and the second was some clothing from Jemima’s wardrobe. It was so strange seeing a single banana in a pair of pyjamas. The original television song was filmed on Play School and the Bananas in Pyjamas was a spin-off series. Again, this show has been essentially ruined by animation. The outfits belonging to Jemima were displayed hanging from the wall which was a great way to see them all together. 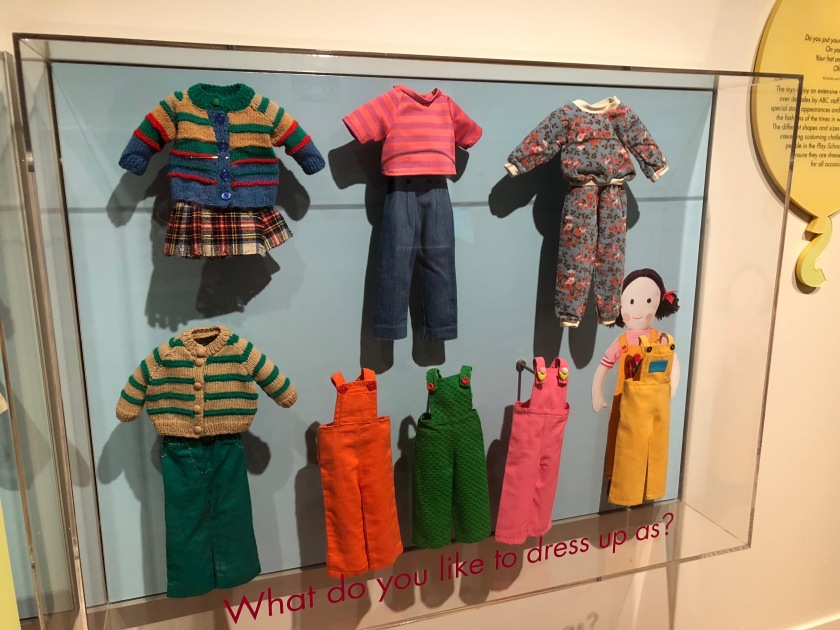 Returning to what I said at the beginning, this exhibition was successful at being a kid’s exhibition that appealed to adults as well. This was mainly due to the fact that there were labels for adults and sections of the exhibition that triggered nostalgia. I actually thought it worked really well having all the activities in one space. If they were all throughout the space it would probably get very distracting and would ruin the atmosphere created in the first room.

To finish, I want to quote the lovely front-of-house staff member who sold us our tickets – “the adults are enjoying this exhibition just as much as the kids – wait – no they are enjoying it more.”