This weekend was spent guiding two lovely friends from Brisbane around Sydney. The absolute highlight of the visit was taking them to see the new blockbuster exhibition at the Powerhouse Museum, Sherlock. It was very busy when we visited and overall it took us about an hour and a half to get through the entire exhibition. I imagine it would be a little longer during peak busy times.

The exhibition is divided into three distinct sections: museum display, stamp collecting, and solving the crime. As soon as you enter, there is a small section displaying some of Sir Arthur Conan Doyle’s original manuscripts and other associated objects. There was a fantastic little scapel kit underneath an anatomical drawing in the corner that caught my attention. The thematic panels were really well done looking as though they were bits of paper pinned up by Scotland Yard on corkboard. Even the font of the labels, one that looked like the paper had just come out of a typewriter, created a nice atmosphere. Objects and display cases were quite well organised in the space allowing for people to distribute themselves around the room and not cause great congestion. To be completely honest, we only spent a few minutes in this space. The lure of solving a crime made it impossible to resist moving on quickly to the second part of the exhibition.

As you move into the stamp section, you are presented with a little booklet. Read this carefully before running off. There are six stamps to collect at six different booths: optics & lenses, botany, cosmetics, telegraph, ballistics, and Scotland Yard. Located at each station was some information, objects, and a stamp machine for the booklets. I felt like an overgrown kid in a candy store. No matter your age, stamps and stickers are two simple pleasures in life. We made our way to each of the stations, reading the panels and learning some basic information about forensics in Victorian England and today.

I loved the cosmetics section. Jars and glass bottles containing “arsenic” and “washing powder” lined a wooden case underneath the orientation sign. The thematic panel explained how substances such as arsenic were once used in makeup before they were discovered to be extremely harmful. The integration of actual objects, meaning little advertisements and booklets from the Victorian time period, was quite interesting and effective. The stamp for this section was a skull and bones to reflect the dangerous chemicals once used. The other sections were also interesting displaying information on early policing and botanical plants that had been used to posion unsuspecting victims.

Towards the end of this space was a Gazette Newspaper stand. Here, you had to punch out a section of your booklet and record a newspaper article with a rubbing. It honestly never ceased to amaze me how much my inner child/Sherlock nerd required restraining. I can’t imagine this space anymore crowded than it was today. Somehow, it still managed to work and we didn’t get too frustrated.

Finally, you enter section three, the solving of the crime space. At first it was quite straight forward – you follow a path that first leads you through 221B Baker Street and the facts of the crime. As soon as you leave the crime scene and finish stamping your blood splatter markings and bullet trajectories, things get a little complicated. We tried to follow our booklets but it was really difficult to work out where to go next. We saw so many visitors wandering around with a “I have no idea what I’m doing” look on their faces. Not to mention when you get to each space, like the conservatory or the slaughter house, you really have to read things super carefully or else you get completey lost. 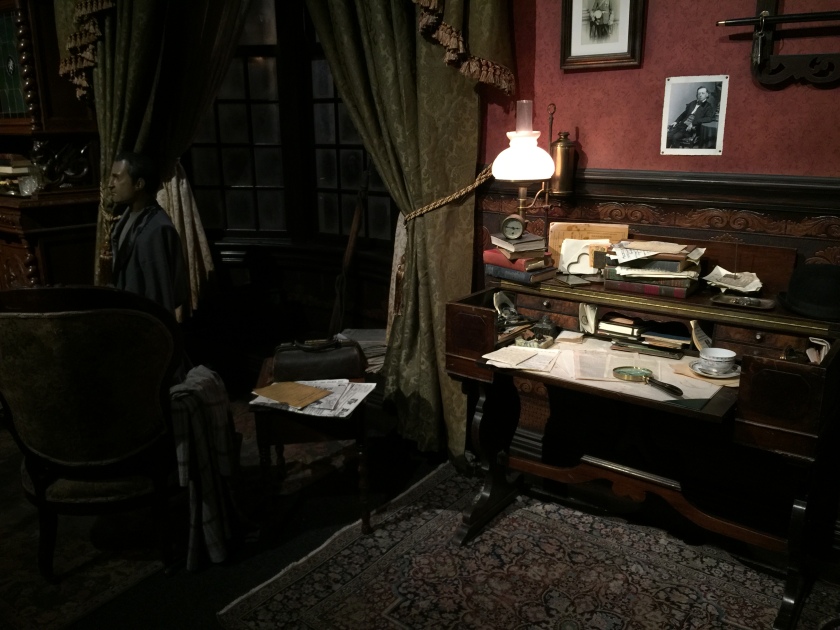 There are four sections that ask you to analyse what you have seen and use a different hole punch machine on your booklet that corresponds to an answer. So, in the slaughter house, you are asked to analyse different blood splatters before selecting which one more closely matches the stamp you made at the beginning of the crime scene space. There are three machines that replicate a blood splatter. You pull a lever or push a button for the machine to work and it spurts out a blood-like substance onto a clear screen. Once you have selected a machine and a splatter, there is a hole punch next to the machine for your booklet. After visiting all four spaces, you line the punched holes in your booklet up with a newspaper cutting and it gives you your final clue – “no spoilers”. 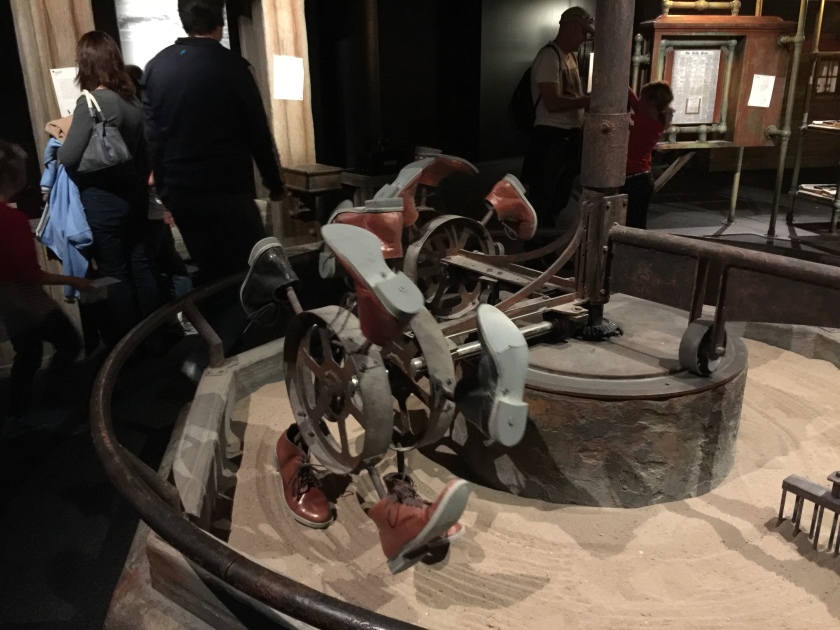 As soon as you are in the zone, know where to go, and begin engaging with each section, things do get ridiculously fun. Just getting to this stage, however, was a little difficult and being constantly shadowed by other visitors wanting a turn did get tiring.

The exhibition concludes with some ephemera from the Sherlock TV series and movies along with some fan art and objects. As a reward for solving the case, treat yourself in the gift shop. I was quite impressed with the gift shop. I thought it might be a lot tackier but I managed to buy myself a very nice “evidence” bag (see picture below). There were adorable notebooks, postcards, and badges. 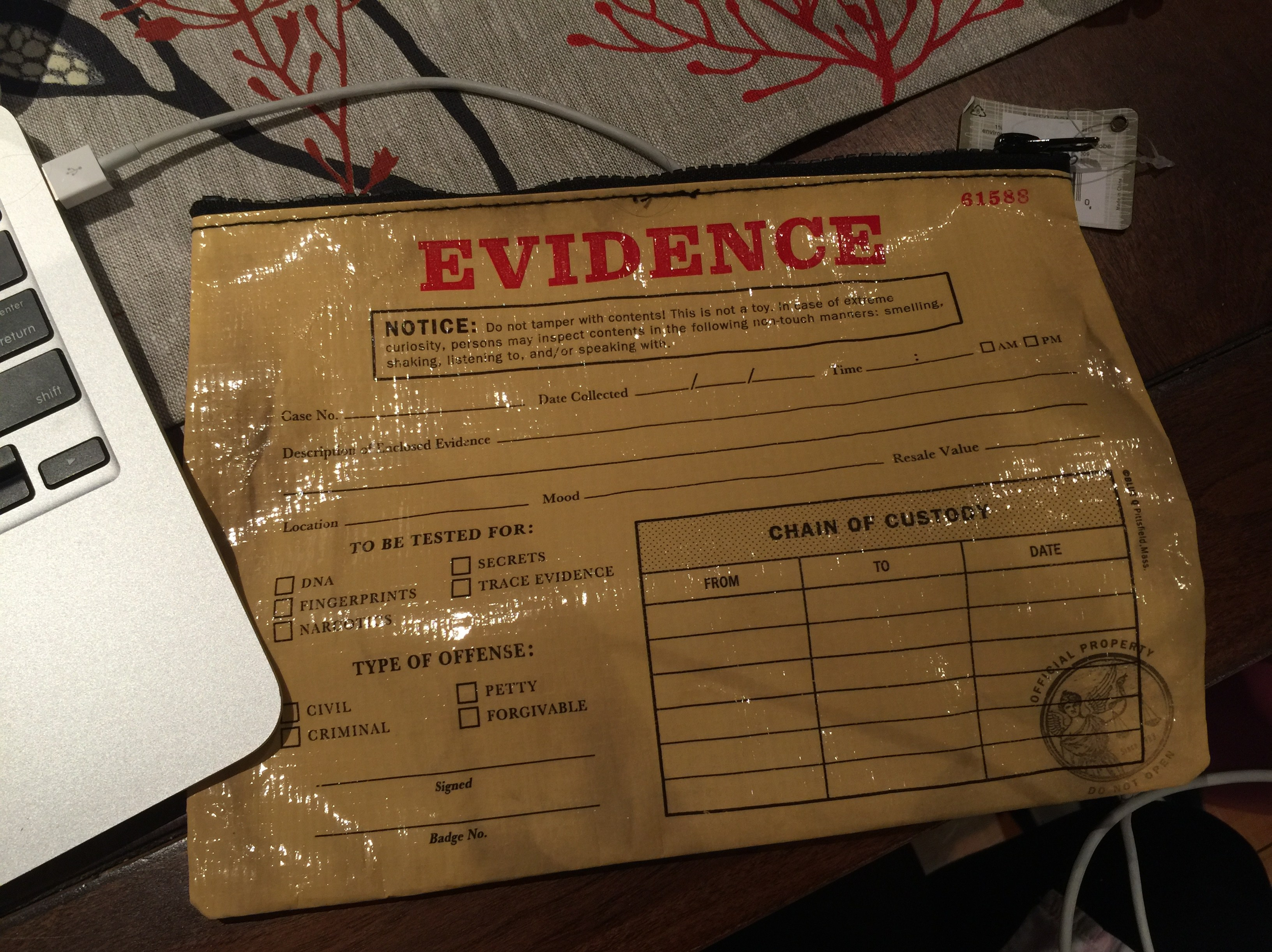 Overall, the exhibition was entertaining and made a valiant attempt to introduce visitors to the basics of forensics. Even though the crime was set in the Victorian era, things like blood splatter and testing seeds for posion are still relevant and used today. As soon as people clicked on to what to do, they did look as though they were engaging with the activities. You could work your way through the exhibition for entertainment’s sake or you could read the labels and have a more informative experience. It was science made accessible!

2 thoughts on “Sherlocked at the Powerhouse”