The Royal Palace in Stockholm was built in 1754 and is one of the largest palaces in Europe. Originally, a fortress was established on the site in the 11th century protecting the waters surrounding Stockholm. In the 16th century, the fortress was transformed into a Renaissance-style castle that served as the residence of the Swedish Royal Family. Its first inhabitant was King Gustav Vasa. A huge fire destroyed the Palace in 1697 reducing the entire building to rubble. The new Roman baroque Palace, completed in 1754, is what can be seen today. It is a very geometric building with four entrances each with its own character. These are masculine, feminine, civilian, and royal. The Swedish Royal Family no longer reside in the Palace, however, it still functions as offices for the King and Queen and the Royal Court. From time to time, there are also dinners and special events. That was a very brief overview of the history of the Palace! 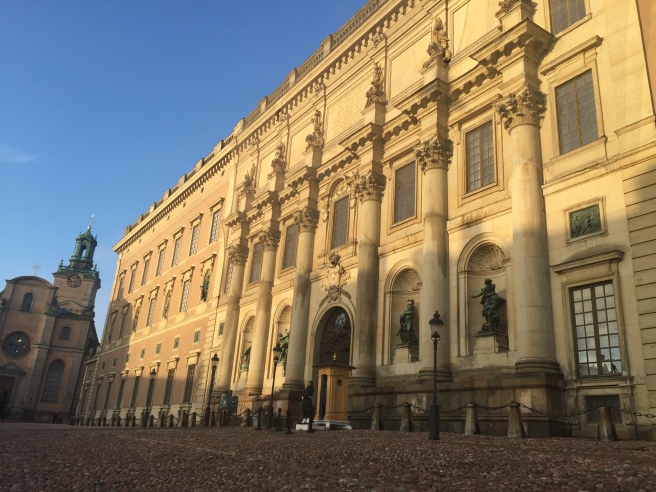 Our time at the Palace began with a visit to the Treasury. Inside a vault are two rooms with the Swedish Crown Jewels on display. If you own a smartphone, you are able to download an audio guide tour. I found that the tour was interesting, but, I did not listen to all stops. As the space was quite small, I felt as though the audio guide was problematic and could very easily cause congestion.

After the Treasury we joined a guided tour of the State Apartments. Considering the rooms had little interpretive material available, a guided tour was definitely a good way to go. The tour lasted around 45 minutes and our guide, Eric, was very knowledgeable. A highlight was the Gallery (photographs below). This ornate room is designed in a Baroque style with ceiling murals depicting the numerous wars between Sweden and Denmark. Without a guide, we would have never noticed some of these details. 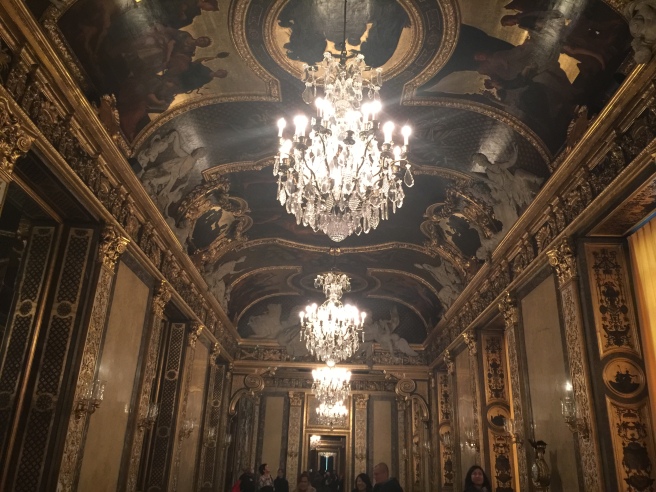 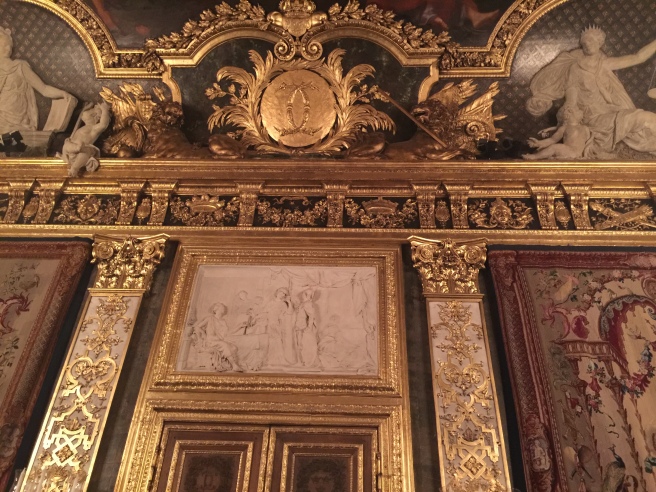 Another part of the tour I enjoyed was hearing about the current Royal Family. I know a tiny bit about the Danish Royal Family because of Princess Mary. As for Sweden, I knew absolutely nothing prior to this visit. Overall, the tour provided a great overview of everything royal.

Before ducking outside and watching the Changing of the Guard, I walked through the current exhibition ‘Royal Wedding Dresses’. This exhibition commemorates forty years since the current King and Queen were married. The setting for the exhibition is amazing – inside the Palace’s Hall of State. Imagine a large white marble room equipped with a throne and adorned with columns. Large white sheets hung from the ceiling above the five wedding dresses on display.

The dresses were worn by Queen Silvia, Crown Princess Victoria, Princess Madeleine, Princess Sofia and Princess Lilian. The display for each dress included a mannequin wearing the dress and a small glass box containing the corresponding shoes and handbag. Veils were displayed in a separate area. What struck me was how each dress was so simple and elegant. I was expecting pretty elaborate textiles. The veils were pretty extravagant including very fine lacework.

I like balancing these types of sites with, for example, more general history museums. For this reason, we dedicated our afternoon to the Swedish History Museum. Watch this space for my next review!