The first stop on our weekend away in Canberra was the Australian War Memorial. The last time I was there was 2013, just before the new First World War gallery opened. I had very high expectations for the space. I was especially hoping for the objects to show more of the social history of war. There are, of course, so many amazing stories that deserve to be told and providing an insight into some of them was what I really wanted this exhibition to achieve.

Walking into the memorial is quite an emotive experience. The Pool of Reflection was surrounded by wreaths from the ANZAC (Australian and New Zealand Army Corps) Day commemorations last Monday, which most definitely added to the atmosphere. Right at the end of the Pool is the Hall of Memory and the Tomb of the Unknown Soldier. Such a stunning building I would highly recommend stepping inside to see the murals and the tomb. Whilst your outside, also take some time to see the poppies on the Roll of Honour.

Then you will be ready to enter the memorial museum. The first space you encounter is an orientation gallery that has an information desk, a place to pick up an audio guide (just for the First World Gallery), and some maps. We opted not to do the audio tour purely because we wanted to discuss the exhibition whilst walking through without an audio guide distracting us.

The first objects you encounter include a huge glass case filled with curiosities and an original ANZAC landing boat. This introduction made a pretty huge impact on me. Considering it was only last year I discovered two of my ancestors were at the landing at Gallipoli seeing one of the landing boats was quite an experience. The halls and exhibition spaces that followed were well designed and contained an array of learning opportunities that suited a variety of learning styles. The use of digital technology especially enhanced the exhibition space and the information it contained. Exhibition cases were combined with dioramas and separate large objects. I think what the dioramas achieved was to show the landscape of some of the battlegrounds. It was a quick reference to the conditions faced and I thought they added quite a lot to the space.

I have a couple of specific highlights that I want to mention. The first was the combination of photographs and digital technology. Rather than having exhibition labels next to photographs clogging up the space, the photographs had been arranged in a family album style layout with an iPad in the middle. If you wanted to learn more about a specific picture you could read about it on the iPad. This is generally how the digital technology worked. It was never superfluous. In my opinion, that was the main achievement of the exhibition. 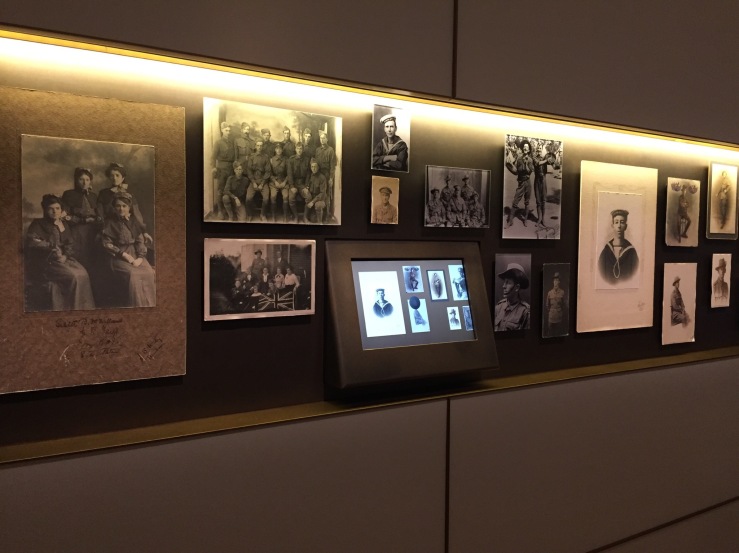 Another highlight for me was that social history was most definitely included. The words of those who fought in the First World War were on display alongside more general uniforms and weapons. These were the objects that attracted me the most and even included a ration biscuit that had written on it ‘What  Soldiers Live On From Rabaul’.

Finally, I cannot write about this exhibition without a quick reference to some of the medical equipment on display. Having learnt so much from the Geoffrey Kaye Museum about medical developments during the First World War it was fascinating to see some more kits and equipment that developed out of necessity.

Overall, the exhibition was a stand out for me. If I had to say something critical, it was a very large exhibition and there was a whole lot to read. In saying this the space was divided into the battles of the war meaning if you had a particular interest in one you could focus on that. For those of you like me who wanted more of an overview the white thematic panels provided this and allowed you to gain a sense of the exhibition space and locate your own interesting objects.

We were exhausted after this exhibition and only had the energy to quickly walk through the other areas. I stopped for a quick photograph of the Shellal Mosaic and we managed to catch an ANZAC Hall plane light show.

The exhibition did not shy away from the reality of war. In particular, a room at the end talked about shell shock and the rehabilitation some soldiers experienced. I don’t know how others may feel in the exhibition space but I think the exhibition did not glorify the war etc etc but rather confronted some pretty hard topics in a way that was respectful and insightful.