I’ve been back in Australia for a few days now in self-quarantine. This has provided an opportunity to write a couple of extra blog posts on New Orleans. First on the list is St. Louis Cemetery No. 1 located just on the outskirts of the French Quarter. It is the oldest cemetery that still exists in New Orleans and was inscribed on the National Register of Historic Places in 1975. The majority of information included in this post has been sourced from the nomination form for the Register that can be accessed by clicking here. It is definitely worth going through the document as you will find some amazing photographs of the Cemetery from the 1970s.

This post will be divided into three parts – why such cemeteries exist in New Orleans, the history of St. Louis Cemetery No. 1 and our experience of visiting. I will mention this again, but please keep in mind that if you are wanting to visit this cemetery as a tourist, you need to be with a licensed tour guide. I will provide a link at the end which contains a list of licensed tour guides.

Above ground cemeteries are not unique to New Orleans, however one could argue that it is the ones here that have become most well-known. These types of cemeteries have been built all over the world as a way to overcome challenges with burying the dead. Nicknamed ‘Cities of the Dead’, the grouping of large burial structures provides the illusion that you are walking down streets with houses on either side surrounded by iron fences. 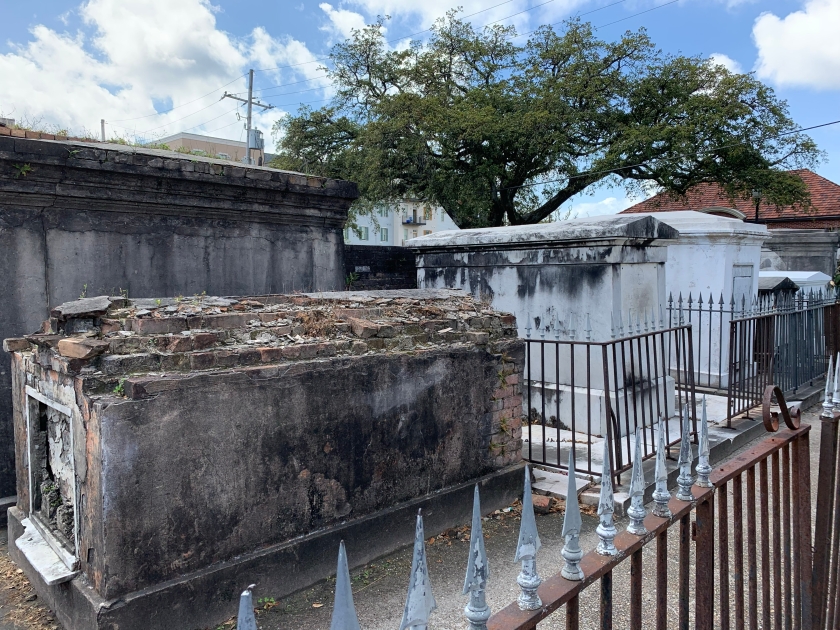 Early settlers in New Orleans found it particularly difficult to bury their dead. In the city the water table is high, meaning digging only a few feet down will result in a grave that fills with water. There are stories of bodies literally popping up all over New Orleans whenever there was heavy rain. Even today, in areas that don’t usually flood, if flooding occurs there might be some pretty unsettling sights. For this reason, the idea of burying the deceased above ground was the only viable option.

Generally, these cemeteries include wall vaults for those who may not be able to afford a family vault, large community vaults and individual family vaults. After a year or two, the internal temperature of the vaults is high enough to cremate an individual. Their remains are pushed to the back of the vault and it can be used again.

St. Louis Cemetery No. 1 opened in 1789 replacing the St. Peter Street Cemetery. The latter cemetery had reached full capacity after two fires and numerous epidemics that would spread through the city every summer. It was also decided that the new cemetery should not be so close to where people lived. St. Louis Cemetery No. 1 was only meant to be a temporary burial site. However, a Spanish royal decree was declared in 1789 allowing the site to become permanent.

The Cemetery was originally exclusively for Catholic burials. Following the Louisiana Purchase in 1803 and the Haitian Revolution between 1791 and 1804, the demographics of the city changed. Protestants from the Northern states and refugees from Haiti arrived in New Orleans mixing Protestantism with Caribbean and West African religious beliefs. The Cemetery expanded to accommodate these groups including a space for Protestant burials and one for the burial of people of colour.

As well as being inscribed on the National Register of Historic Places, St. Louis Cemetery No. 1 was also listed on the African American Heritage Trail in 2008.

According to the significance statement (found in the Register nomination form), one of the primary reasons for acceptance on the Register is the Cemetery’s architecture. The Cemetery has a variety of brick tombs built in the early 19th century as well as elaborate marble tombs built later with accompanying statues. These are representative of local stonecutters’ artistic skills and abilities. Such tombs contain notable figures from New Orleans’ history including the first mayor of the city and, reportedly, Marie Laveau, the Voodoo Queen. 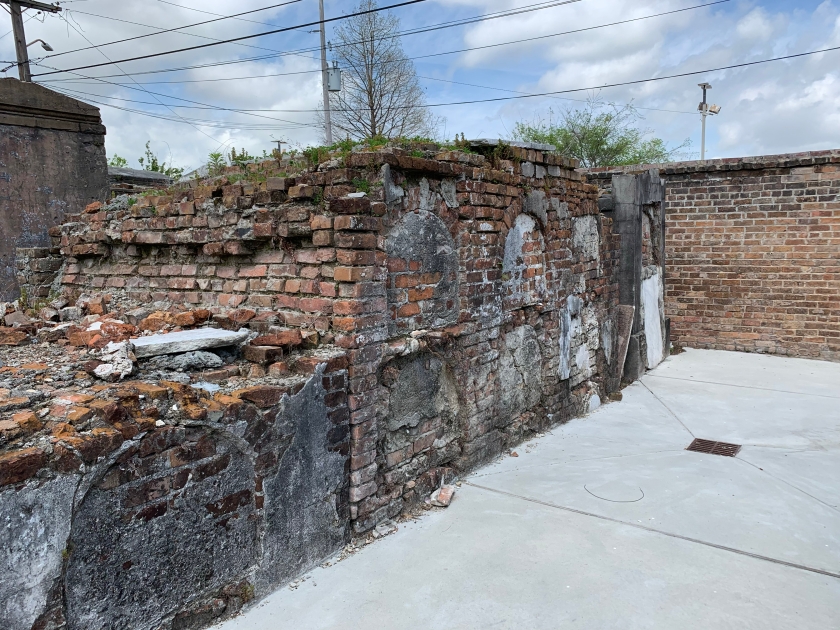 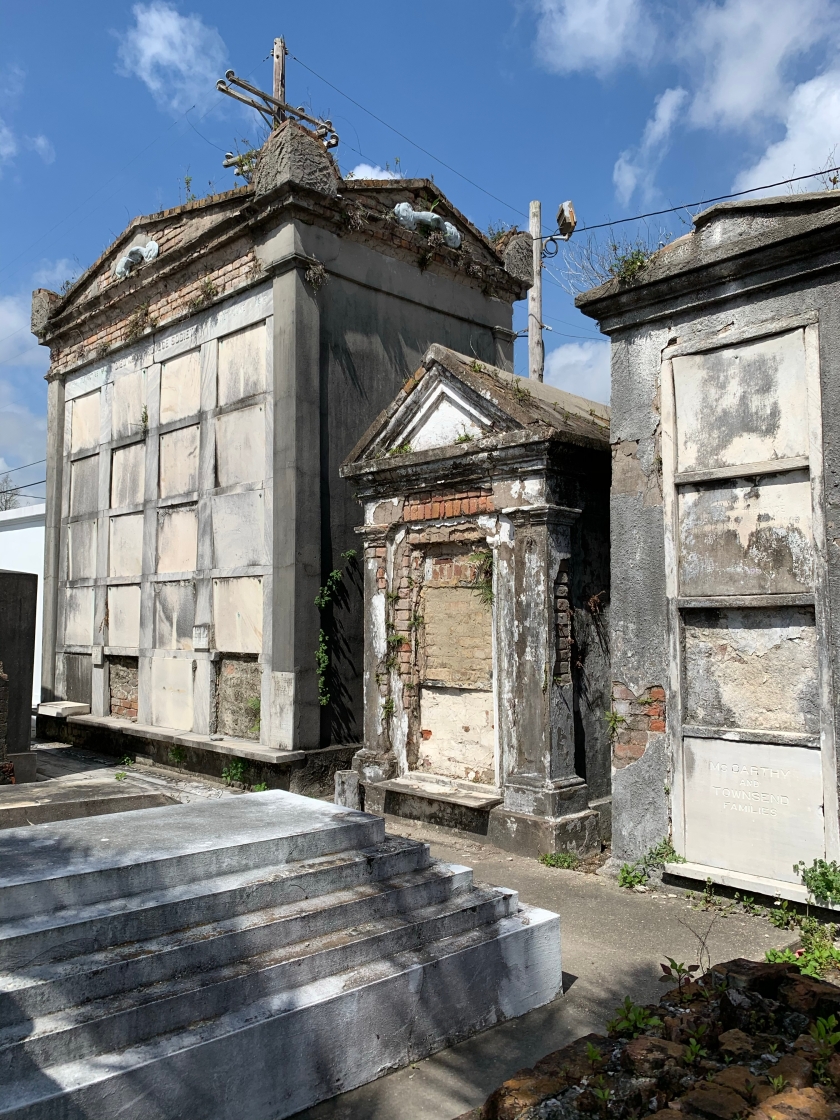 Luckily, I read before visiting that it was necessary to be on a tour with a licensed tour guide (full list of tours here). Judging by how other groups were moving through the Cemetery, each tour roughly covers the same ground, but obviously might not distribute the same information.

We focused mainly on the logistics of the Cemetery (how burial practices worked) then spent some time discussing the history of the Cemetery. In particular, we learnt about what would happen if someone couldn’t afford a vault, the more well-known people buried in the Cemetery and a little about the architecture. We only really touched on the different styles of tombs and some of the architects involved.

One of the highlights on the tour was seeing the potential final resting place of Marie Laveau. I say potential because it isn’t actually 100% confirmed. It is, however, where her family vault is located. One thing our guide did mention was the high level of vandalism that occurs in the Cemetery due to a belief held that if someone marks her tomb with three X’s (XXX) they can have any wish they like. People mistaking other tombs for hers has led to the unnecessary vandalism of some tombs in the Cemetery. I can’t believe it has to be said, but don’t vandalise graves.

Another highlight for me was having the opportunity to learn about burials in New Orleans and how rituals have changed over time. It would have been fine to wander around the Cemetery, but this allowed for a much more informative experience. And, of course, seeing Nicholas Cage’s vault (see the pyramid below) was something pretty bizarre.

I would strongly recommend a tour that spends the majority, if not all, the tour time in the Cemetery. This is because there is so much to see and learn, you wouldn’t want to rush things. Overall, we had about an hour in the Cemetery. I feel a lot was covered, but there was an opportunity to discover more. 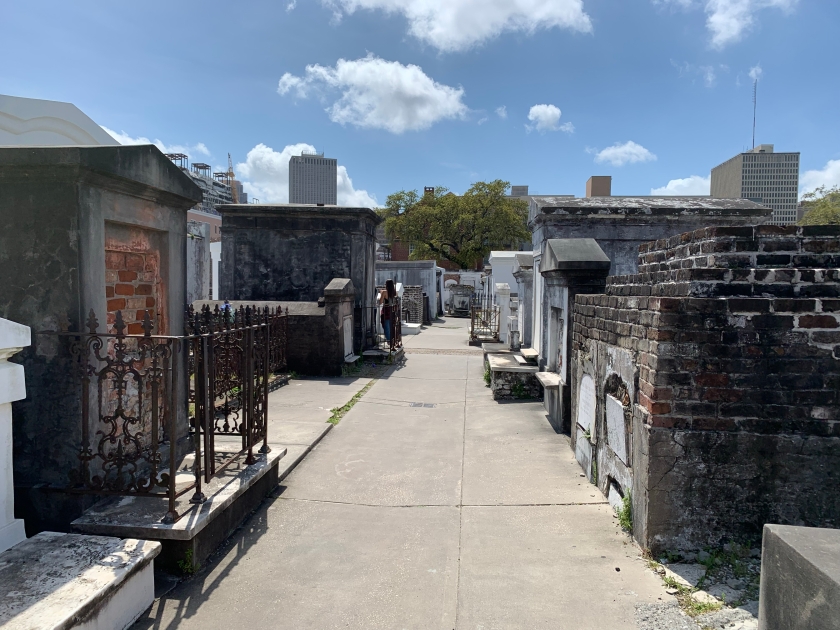 Visiting St. Louis Cemetery No. 1 is definitely something I’d recommend. It is an amazing cultural experience and a great opportunity to learn more about death rituals and practices, particularly in New Orleans.