If you are ever visiting New Orleans and have time to explore a museum in the French Quarter, I strongly recommend visiting the New Orleans Pharmacy Museum. Not only is it a museum, but also a heritage place – inscribed on the National Register of Historic Places. The building was originally the home of Louis J. Dufilho Jr., America’s first licensed pharmacist. Prior to 1804, to become a pharmacist involved a six month apprenticeship. You were then free to sell any of your own concoctions or medicines without any regulations enforced. In 1804, a board of reputable pharmacists was formed that administered a three-hour oral examination. Louis J. Dufilho Jr. was the first to pass this examination thereby allowing his pharmacy to be the first in America run on proven adequacy.

The Museum consists of two floors, both of which have some small exhibitions and an array of bottles, containers and equipment. I will say now that, to the best of my knowledge, the second floor of the Museum is not accessible. The first floor looks as if the pharmacy is still in operation with historical bottles lining the walls and glass display cases displaying a diversity of objects. Upstairs, there are a few exhibitions and some information on feeling unwell in the 19th Century.

I will include a couple of photographs below so you can see just how many objects are on display in such a small space. I really want to focus on a few highlight objects (that I must admit were fun narrowing down). Although I could make some comments about the layout of the exhibitions, it is more a museum filled with curiosities, perfect for exploring on your own. There are, of course, thematic labels placed amongst the objects that help with establishing context. These labels are a little outdated looking, but do suit the overall aesthetics. The information that will accompany each highlight object has been sourced from these labels. 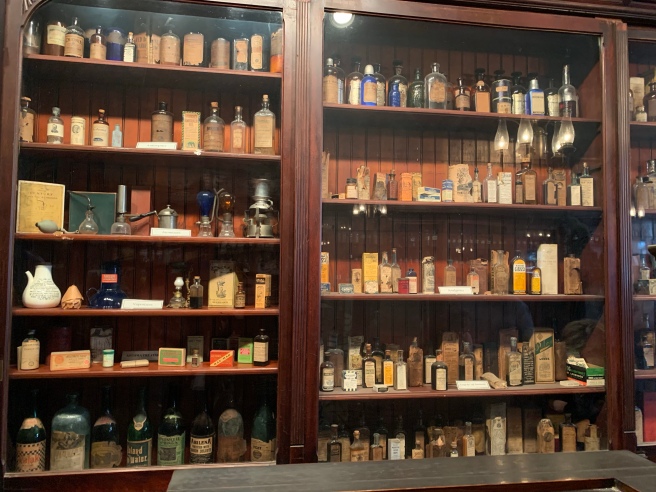 To no surprise, I have visited quite a few medical museums that contain similar objects to those on display here. For this reason, my favourite objects on display were the love potions as they are something a little different. Voodoo powders and potions were commonplace in pharmacies during the 19th Century. Those who were looking for love could order a love potion from the pharmacy by number, not by name, to avoid embarrassment. This numbering system inspired the song ‘Love Potion Number Nine’. The contents were not usually ingested. Rather, they were sewn into the lining of a jacket or distributed around the home.

New Orleans is a hot and humid city which means a lot of mosquitoes. In the past, this led to outbreaks of Yellow Fever as well as Malaria. Add Cholera to this list and you have a city in summer that was truly deadly. To give you an idea of just how deadly, approximately 5-10% of residents died each summer due to infectious diseases. In 1842, a charitable volunteer organisation was formed that provided home care for those during epidemics. Louis Dufilho Jr. was the official pharmacist in charge. For those who contracted Malaria, quinine was available that could actually cure a patient. Without access to this drug, patients were exposed to bleeding, purging and arsenic. The bottles photographed below all contain medicines that were administered during the 19th Century in an attempt to cure diseases that were classified as epidemics.

During Prohibition, alcohol could still be prescribed for medicinal use. All bottles made for pharmacy use during this period were marked with the label ‘Federal Law Forbids Sale or Reuse of this Bottle’. This was to discourage people re-using the bottles and selling their own homemade alcohol.

This bottle and object label is one of many in a cabinet that explores certain herbs and their medicinal properties. Calendula stood out to me as it is something I use on my skin to reduce inflammation. As you can see, the label for each bottle has both a mythical and medicinal history included. It is interesting to see the evolution of the herb and its use. 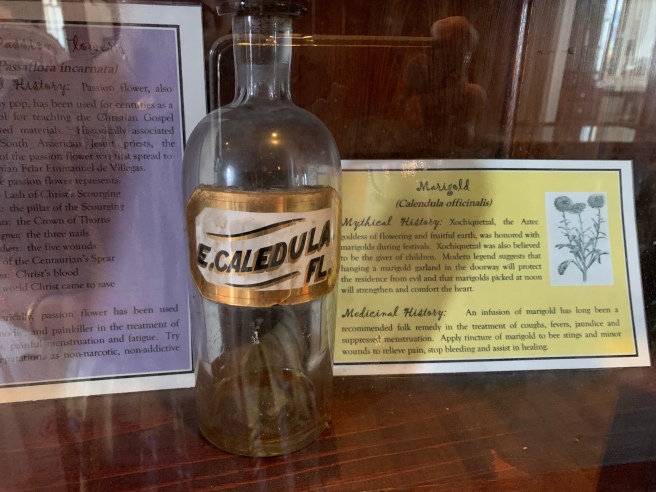 I have to include the veterinary tonics on this list. I don’t think I’ve ever seen these before in a medical history museum! My favourite is the worm powders for dogs and the ‘quick cure’ which you can imagine might not have done what it promised.

It was mildly horrifying seeing the ingredients in some of these medications and reading what they promise to achieve. For example, the pills at the front promise to stimulate the kidneys to assist with weight loss. It made me stop and reflect on what dangerous methods we implement today in order to try and lose weight.

Thankfully there is a bottle that states no opium can be found in this treatment. If you are noticing that quite a few bottles don’t include ingredients on their label, they didn’t have to legally tell you what was in the medication until the early 20th Century. 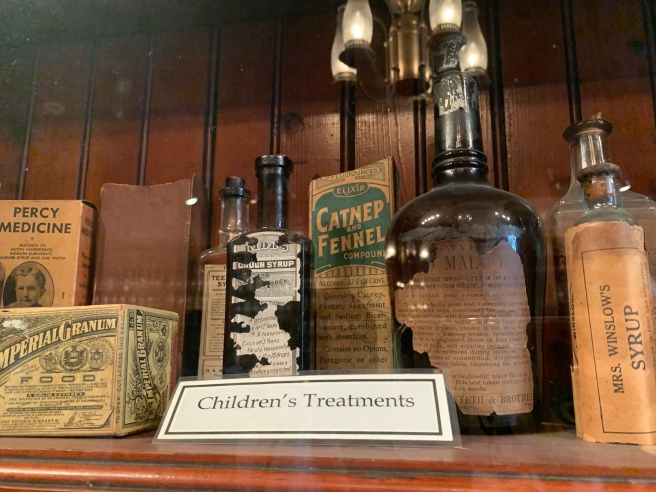 Right next to the soda fountain is a bottle of Kola Nut. This contains the dried fruit of the Cola nitida tree that is grown in tropical climates. It was first introduced to Coca-Cola in 1886.

This is about as terrifying as it sounds. This spring-loaded device contains numerous blades that would cut through the skin allowing for bloodletting. Some diseases were believed to occur due to an excess of blood in the body. Releasing the blood was thought to release the disease. 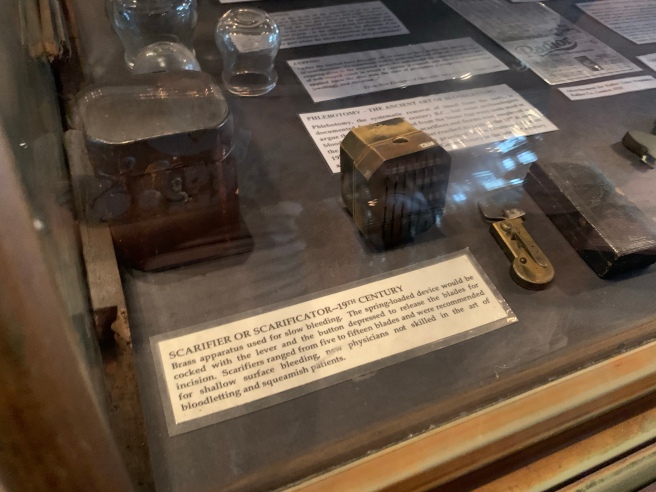 These small containers once held perfumes that were made from Neroli, lavender and violet. Jasmine was also used by those who worked in the red light district of New Orleans. 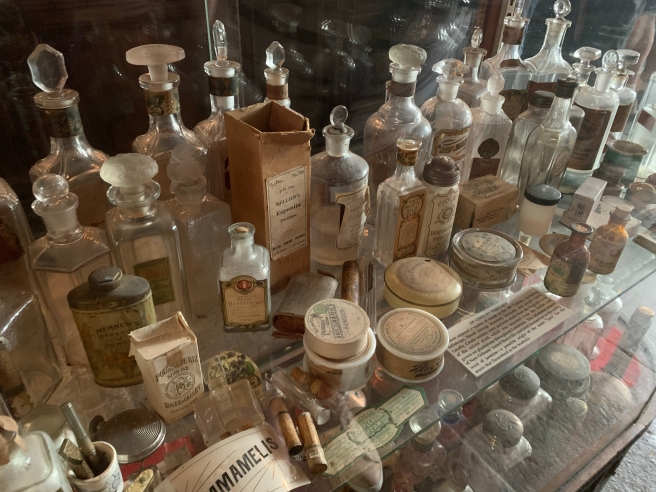 This small travel case could be taken with a patient wherever they went and be used for quick drug administration. Next to the case is a packet of tablets that promised to assist the vaccination in working quickly.

Last, but not least, these ointment jars were used for storing all sorts of ointments in the 19th Century. Ointments are anything that can be applied to the skin and were made using paraffin, lard and petrolatum.  The little jars are mostly made from porcelain so  would be very delicate. 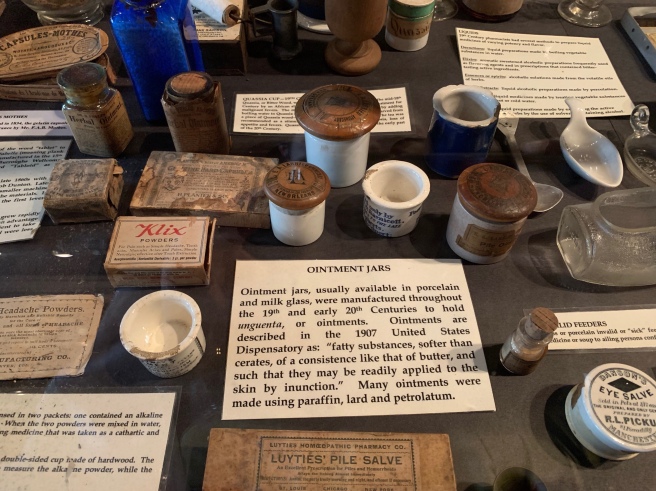 The New Orleans Pharmacy Museum is open Tuesday to Saturday from 10am to 4pm. It is definitely worth checking their events calendar to make sure there are no large bookings that might result in the Museum being closed. Entrance is $5 for adults, $4 for students and seniors and free for children under 6. As I mentioned before, the second story of the house is not accessible. If you are looking for a step back into a medical past while in the French Quarter then look no further.