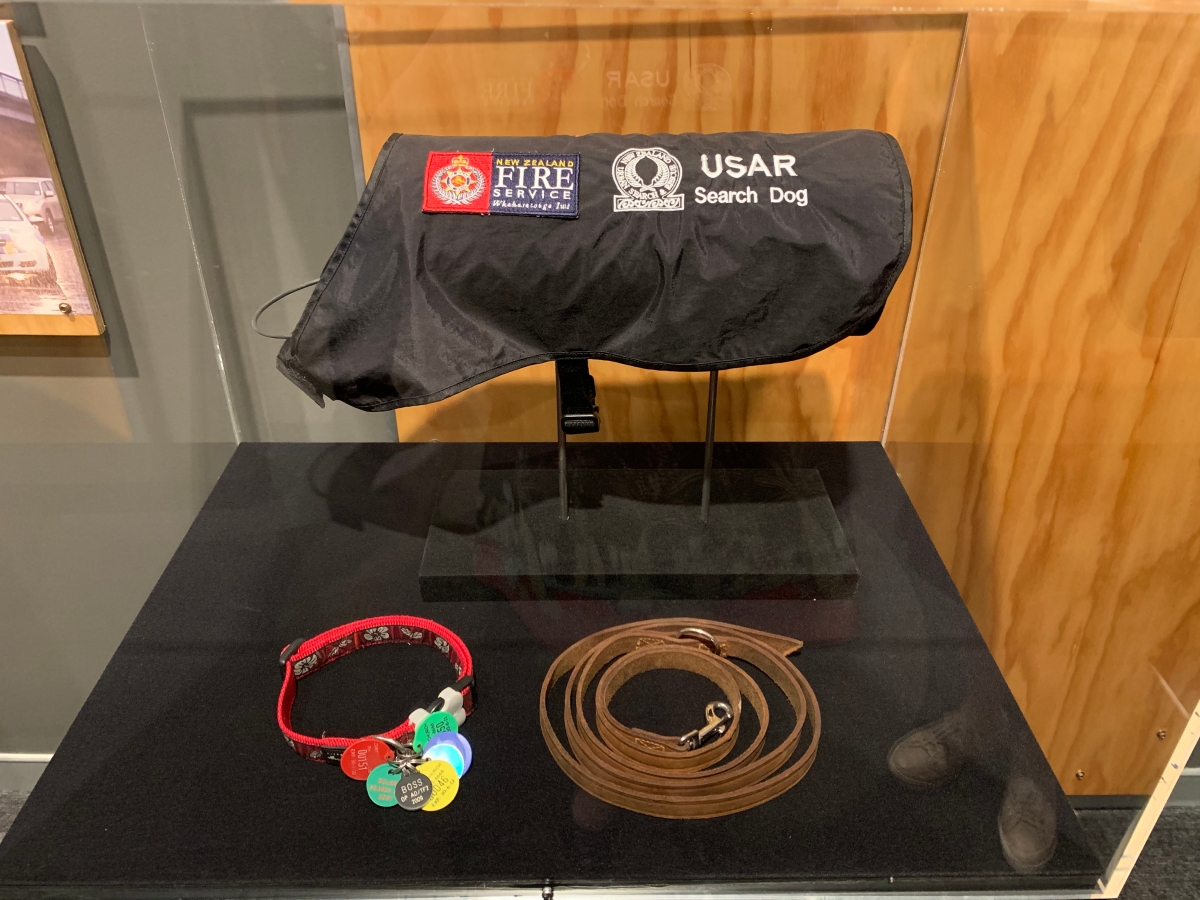 Firstly, Happy New Year to everyone reading this post! It’s the start of both a new year and a new decade. I am really looking forward to 2020 and I’m hoping it will be a year of further growth and new experiences. There are some exciting things planned and plenty of museums and heritage places on the horizon.

My first post for 2020 is on Quake City, a museum attached to the Canterbury Museum that delves into the 2010 and 2011 earthquakes. For those unaware, Christchurch recently experienced two destructive earthquakes in September 2010 and February 2011. The earthquake in 2011 caused the most damage and basically reduced most of the city to rubble. Just walking around the streets today, it is beyond inspiring to see how the city has started to rebuild itself. What has really stood out to me is how arts and culture is being integrated almost every step of the way. For example, there are so many large public art murals painted on the sides of buildings throughout the city centre. Quake City explores each earthquake and the aftermath, including displays covering survivor stories, liquefaction and the Student Volunteer Army (to name only a few). 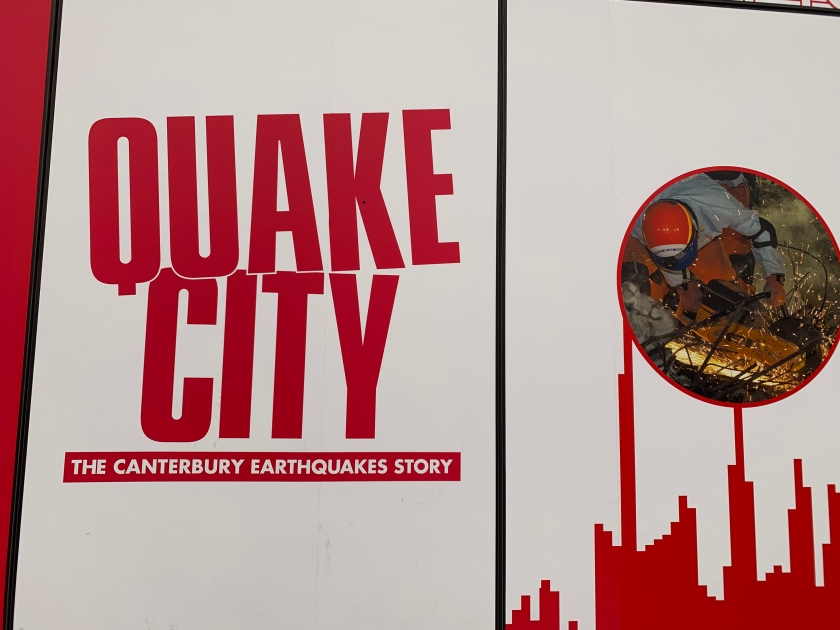 There is a pretty set path that guides visitors chronologically through the 2010 earthquake, 2011 earthquake and, finally, the aftermath. To start, however, there is a short film explaining earthquakes from a Māori perspective. The god Rūaumoko (or Rūamoko), the son of Ranginui (the Sky) and his wife Papatūānuku (the Earth) is responsible for shaking the ground causing destruction. The film is short but informative and a very welcome perspective to include.

Following this is some information on the 2010 earthquake that struck on 22 September at 4.35am. There is a great thematic panel exploring why Canterbury, in particular, experiences so many earthquakes that is definitely worth a read. It stopped me from having to think back to my high school geography days by clearly explaining what is an earthquake and why they occur. Canterbury is unfortunately positioned in an area that is a hotbed for earthquakes. An object highlight in this section are the After Shock beers brewed by the Three Boys Brewery in Christchurch. During a brewing session the earthquake hit and temperature control was lost. Rather than disposing of the batch, the brewery sold the beers.

By far the largest section of the Museum focuses on the 2011 earthquake. It covers themes such as rescue dogs (see feature image at the top for objects), survival stories, the Cathedral, rebuilding Christchurch and the future. If you don’t follow the exhibition on the designated path (it would be pretty hard not to) it doesn’t make much sense. For this reason, a prescribed path works well. Especially considering the final display is about looking into the future after reflecting on the past.

We spent the most amount of time in the Museum watching survivor testimonies. Just after the section on the 2010 earthquake there is a small cinema-like area showing a film that runs for 1 hour and 12 minutes. In total, there are sixteen individuals interviewed. Three sing songs to communicate their memories and the other thirteen share stories of where they were on the day or what their role was when the 2011 earthquake hit. Each story is so personal and it is truly an emotional experience sitting and watching firsthand accounts from people who lived through this disaster. 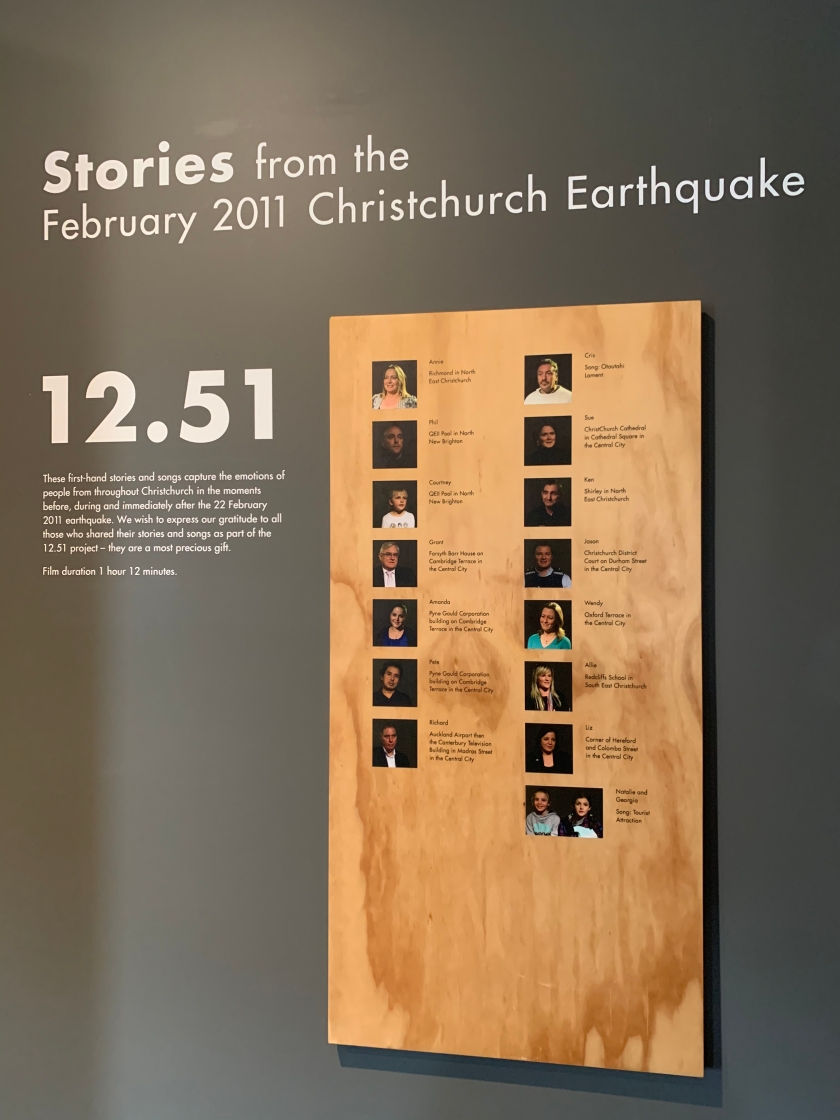 Some of the interviewees were trapped in buildings for hours on end and talk about being rescued or working together in teams to rescue themselves. One of the hardest stories to listen to was from Pete who entered the Pyne Gould Corporation building on a resuce mission. Pete talks about the loss of life that occurred before his eyes, but also shares stories of resilience and hope with many emerging from the rubble unscathed.

Another interviewee is Jason who was working at the District Court. When the earthquake hit, Jason had to organise the transfer of six accused persons from their cells as the basement where they were located started to flood. When they had emerged, Jason found a judge to hand out rulings on the banks of the Avon. Two were released on bail and four were sent to prison. There was also a story shared by Allie who worked at Redcliffs School and remembered seeing children walking out of their classrooms into thick red dust that covered their faces and clothing.

This section of the Museum was a highlight for me as it provides firsthand accounts and a human connection to the tragedy that is difficult to achieve when just reading labels.

The exhibition does a great job at explaining processes that occur both during and after an earthquake. I have vaguely heard of liquefaction and found the section covering what it is and why it happens very useful.

Underneath the thematic panel is an interactive that allows visitors to see liquefaction in action. It’s a small sand pit where you can bury certain objects and place others on the surface. After pressing a button, the sandpit shakes and a type of liquefaction occurs revealing the buried objects and sinking the ones resting on top.

Dotted throughout the exhibition are quite a few helpful explanatory panels about different geological processes. These break up the exhibition and provide some necessary context.

Rebuilding and the Future

As I mentioned earlier, I was amazed by how far Christchurch has come since the 2011 earthquake and how much of the city has been rebuilt. This section not only displays what has been achieved, but provides an insight into the future.

One particular thematic panel that stood out to me is on the Arts Centre of Christchurch. The previous day we had admired the Centre both when having breakfast at the Bunsen Cafe (located in the Centre) and when viewing the complex from the Botanic Gardens. The Centre consists of a group of Gothic Revival style heritage buildings that were formerly the main campus for The University of Canterbury. In order to restore these buildings, Christchurch undertook one of the largest heritage restoration projects in the world with an investment, so far, of just over $290 million dollar.

Right at the end of the exhibition is a large touch screen where visitors can see planned future projects. For example, the building of a new Convention Centre and restaurants along the south of the Avon. I was very surprised that all the digital components of the exhibition were working (as so often many in an exhibition of this size don’t).

I would recommend this museum for anyone wanting to learn more about the 2010/2011 earthquakes and their lasting impact on Christchurch. It is very specifically about the earthquakes so if you’re looking for a more general history of Christchurch then the Canterbury Museum might be better suited. Keep in mind also that entry is quite expensive at $20 for one adult. It is located in central Christchurch and is accessible.