This morning was the final plenary for the conference, presented by Ben Quilty, and the official handing over of the conference to Canberra for 2020. Quilty touched on something significant that I believe we can all learn. That is, there is no shame in admitting there are things you don’t know and that you are still learning. It is far better to recognise your limitations and act on them rather than not care at all.

The conference has been a truly humbling experience. There is so much I will be taking away. Above all else will be the fact that I still have so much to learn. As soon as I get back to work I will be reading the Indigenous Roadmap and The University of Queensland’s Reconciliation Action Plan that was just recently launched. On top of this, I am going to ensure that I just listen, whenever I can.

I want to say a huge thank you to the conference organising committee, speakers, sponsors and everyone I’ve met along the way. I am unbelievably proud to be part of this industry – one that, on the whole, is willing to learn and grow. This industry is full of challenges and obstacles, but, I have never met a more dedicated group of individuals willing to face these head on. I am not sure at this stage if I will attend Canberra 2020, but, I am definitely going to be at Perth 2021 so see everyone in two years!

Megafauna Central, a branch of the Museum and Art Gallery of the Northern Territory, opened on 5 July 2018. It showcases the megafauna of Central Australia from Alcoota Scientific Reserve. Alcoota is a site containing numerous fossils from the late Miocene Epoch (8 million years ago) located approximately 150 km east of Mparntwe (Alice Springs). What is most unusual is that over a 200 metre stretch around 3000 fossilised animals have been discovered. The exhibition asks questions such as ‘what brought all these creatures to the one spot and killed them?’ That question was taken from the official website accessible here.

The exhibition is small but filled to the brim with information. The introductory panel does a fantastic job setting the scene. Out of all the species discovered in Alcoota, fourteen have be classified as megafauna (a species where the adult weighs more than 45 kg). One thing I noticed about the signs is that right down the bottom there is a button you can press to hear the sign read in Arrernte (an Indigenous language from the region).

Here are some incredible highlights from the exhibition.

1. Getting the Dirt – a window into behind the scenes 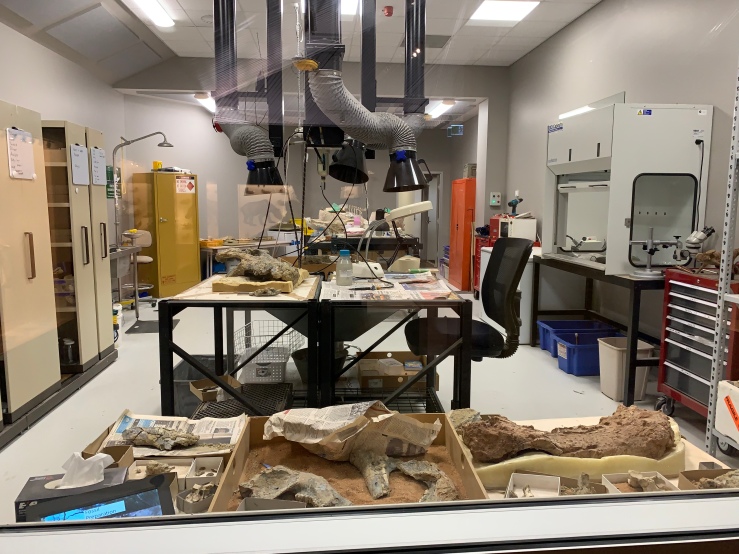 I am a huge fan of allowing visitors who come into the museum, any museum, the opportunity to see what we do behind the scenes. In Megafauna Central, there is a window at the back that allows you to look into the lab where fossils are cleaned and maintained. There is a little step ladder available for small children to climb and see into the lab which is fantastic. Next to the window you can select to hear audio answering four questions: what is in this room, what is happening, what tools are being used and what happens next?

I really think that spaces like these develop trust and place more of the museum on display – a part that visitors don’t normally get to see. It can add to an understanding of the multiple roles in the museum and even show objects at various stages of conservation.

After hearing the talk by Adam Yates on day 2 of the conference, I was particularly looking forward to seeing the Baru. It is incredible to think the skeleton has been 3D printed – it looks so real.

According to the label, the Baru could grow up to 4 metres long and weigh up to 800 kg. Just let that sit for a minute. Everything from its build to its skull indicate it was a predator to be feared, preying on other megafauna. Although it is yet to be granted an official name, Baru is a genus where similar species found in northern Australia belong.

3. Piecing the past together

This small display serves a similar function to the window into museum museum life, revealing the work of paleontologists. The thematic panel explains the role of a paleontologist, studying fossils and piecing together the past. The objects on display are very insightful, especially if you had no idea on entering the exhibition what the job might look like. If you think it’s all flashy high tech work, then you just have to see this picture to realise the work can be very low tech and labour intensive.

4. Interactive activities for kids (and kids at heart) 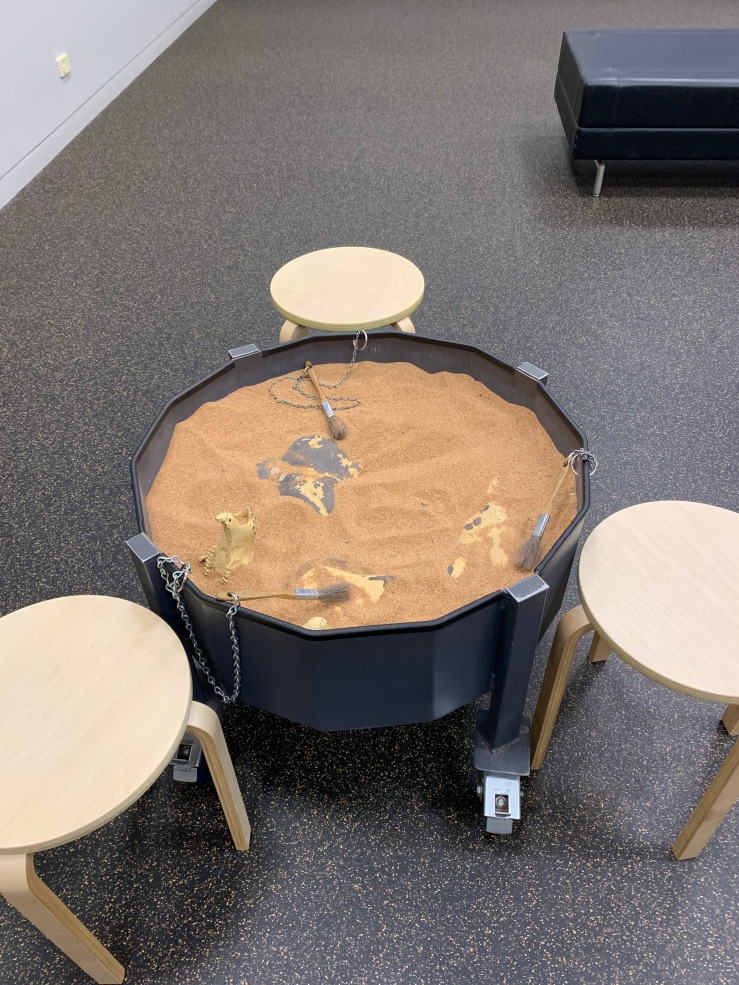 I have to admit I was a little worried when I first walked around the space and saw a table with colouring-in pictures for kids, and that was all. On my second lap around, I noticed the incredibly large room at the back of the exhibition space (I didn’t make promises that I am observant). Inside, are two mini excavation sandpits with hidden fossils and brushes. Considering the theme of the entire exhibition, I think these are great for engaging kids and also work really well with also engaging their parents/guardians. That feeling of discovery can be wonderful. 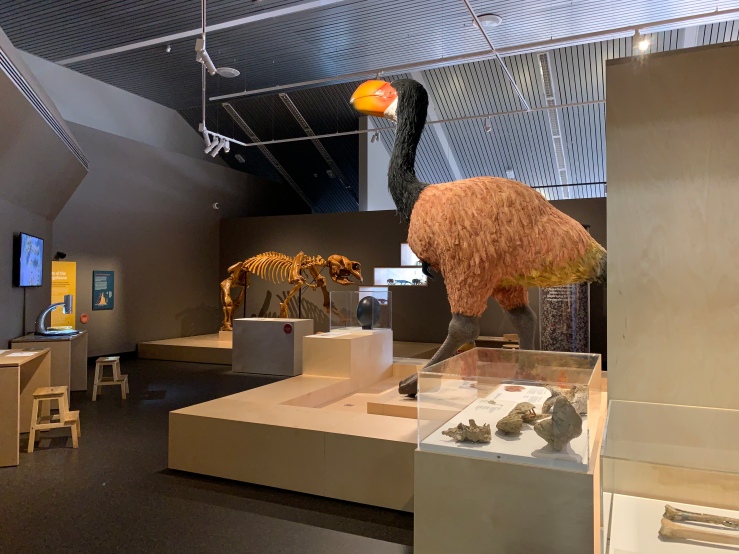 If you start the exhibition by turning left and following the path, after the large-obvious-but-I-missed-it-the-first-time room you go around a corner and meet the Dromornis stirtoni. Or as I like to call it THE HUGE BIRD.

On display is a life-sized model made to the correct proportions. This was ascertained by examining the available bones. As the bones were from a male, this model is of an adult male. Honestly, it shocked me because of its sheer size. In front, there is a model of its egg which, I mean no surprises here, is also massive.

Towering behind the model is a cast of the skeleton. This animal could weigh up to 750 kg and is related to ducks and geese, not emus, which I originally thought. Fun fact, they were herbivores and swallowed stones to help digest food. There were some real bones in a case just next to the cast that are great to view.

Just a quick shout out to the panel titled ‘What’s in a name?’ It goes through how scientific names for animals are decided. As long as a name is unique and not overtly offensive to anyone, you are free to name a species what you wish. It was great to learn that trends in scientific naming now mean a lot more Indigenous languages are being incorporated.

I am going to finish with the largest marsupial to ever have lived and one of the last Australian megafauna, only becoming extinct 42 000 years ago. The Diprotodon lived all over Australia from the top of the Northern Territory to the south of Victoria. The skeleton on display is a cast, created from fossils discovered in Lake Callabonna in South Australia. Sad story, animals would often wander into the lake looking for drinking water, get stuck in the sticky clay on the lake bed and die. The skeleton from which  this cast was made was the first complete skeleton of the species discovered.

Megafauna are fantastic creatures and Megafauna Central brings them all to the one place. The exhibition space feels modern, uncluttered and, although small, designed in a way that allows you to explore and see something hidden around every corner. I thoroughly enjoyed my visit and treated myself to a couple of items at the gift shop.

Entrance to Megafauna Central is free. It is open seven days a week from 10 am to 4 pm except for Good Friday and between 25 December and 5 January this year/next year. It is an accessible museum and a great place to bring kids.