If you ever find yourself in Vegas needing a break from the intensity of it all, The Mob Museum (National Museum of Organised Crime and Law Enforcement) is a must. Located in Downtown Las Vegas, the building originally housed the U.S. Post Office and Courthouse. Construction began in 1931 and finished in 1933. Today, the building is registered on both the Nevada and National Register of Historic Places.

It was built to accommodate federal officials who were looking for a home before the Hoover Dam opened. As the only federal judge in Nevada was based at Carson City, 400 miles from Las Vegas, judges would visit from Los Angeles and San Francisco twice a year. In 1945, Vegas finally had a full time judge. Flash forward to 1950 and the courthouse held one of the Kefauver Committee hearings. This was a special investigation into organised crime led by Tennessee Senator Estes Kefauver. The outcome of these hearings was that the underbelly of crime in America was finally exposed, especially in places such as Las Vegas and Chicago. 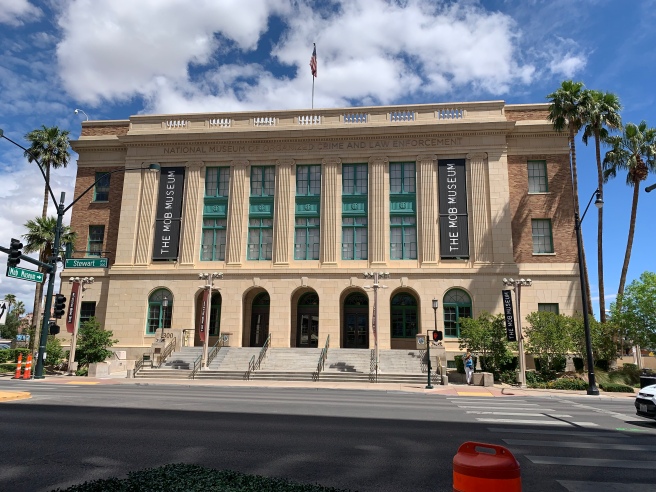 In 2002, the building was sold to the City of Las Vegas for $1. On the provision that it had to be preserved and used as a cultural centre – preferably museum.

There are three different types of tickets you can choose from – general admission, deluxe pass (1 experience) and premier pass (2 experiences). The experiences include a crime lab experience, firearm training simulator and distillery tour. It was a tough choice, but, we just went for general admission that allows access to all exhibition spaces. Once you have purchased a ticket, you take an elevator to the third level. I really like when multi-level museums are organised in this way – i.e. you start on the top level and work your way down.

After learning about the origins of The Mob, you make your way through a series of displays that cover the development of Las Vegas, the 1920s and 1930s crime syndicates and events such as the St Valentine’s Day Massacre.

There are quite a few highlights to discuss so I’m going to keep things brief. Before going into detail about some specific objects, there are a few general highlights I want to mention.

It isn’t often that I leave a museum after having read multiple labels and don’t feel fatigued. The Mob Museum manages to communicate a lot of information through minimal text. This is supplemented by quite a few short films and interactive elements that I’ll come back to later.

Located in the basement is a Speakeasy that serves cocktails inspired by those created in the 1920s and 1930s. I was able to try some Moonshine and learn about its history and significance during the Prohibition Era. On display around the Speakeasy are an array of objects including a beautiful 1920s Art Deco dress. 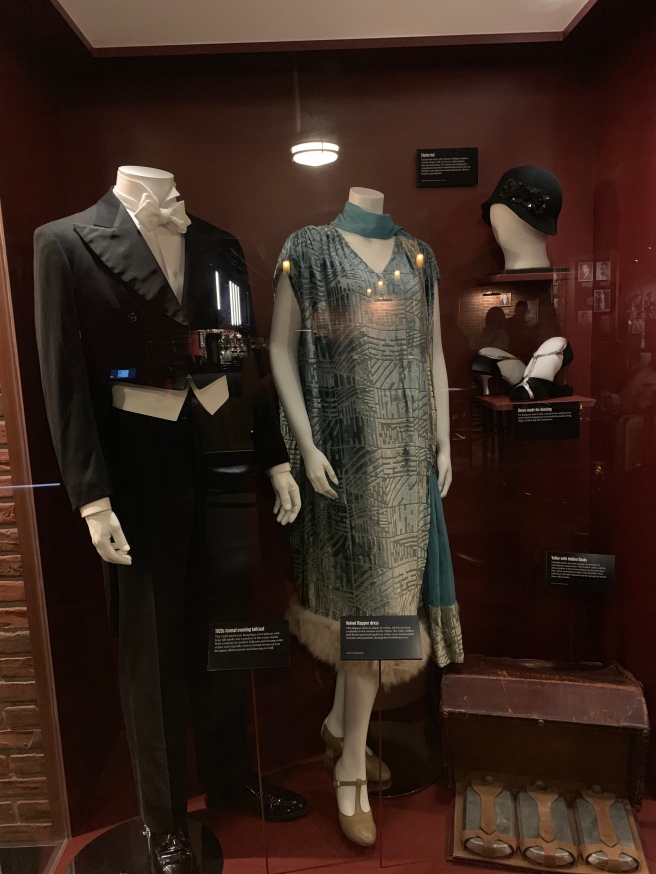 Almost every exhibition space feels like an immersive experience with various elements added to suit a particular theme. On the third floor, where the origins of The Mob is on display, there is a police line-up that you can walk behind to have your picture taken. There is a large image of a line-up from the 1930s on the wall next to the entrance.

In the space dedicated to the St Valentine’s Day Massacre there are photographs reproduced on oak barrels. Considering the connections to Prohibition, this display choice is very apt.

There are also a significant number of short films playing throughout the Museum. For example, on the second floor you can sit in the same courtroom that held a Kefauver trial and watch excerpts. On that same level are a number of display screens sitting on a dining table. You can order a series of different cities from the menu and read all about how The Mob operated in that city. 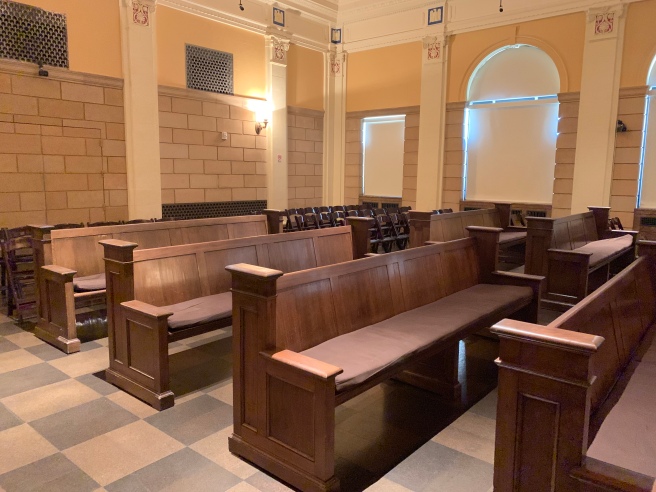 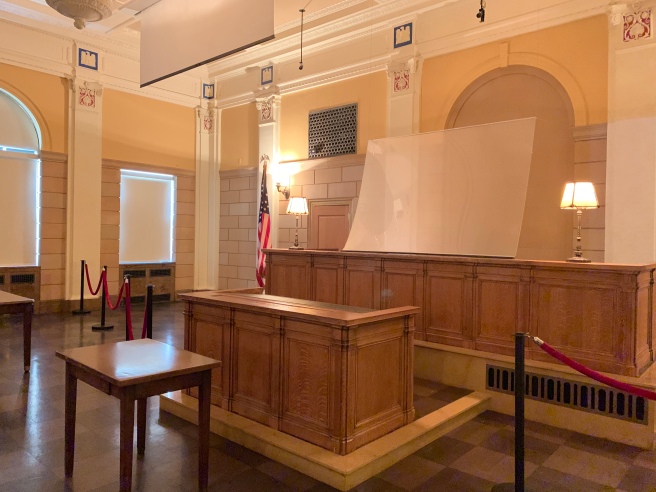 On 14 February 1929, Bugs Moran’s men were shot against this wall in Chicago. Moran was a Chicago gangster and the hit is believed to have been ordered by Al Capone (jury is still out). The possible aim, to stop inter-gangster warfare. The building where it happened, SMC Cartage, was demolished, but, the wall was saved by businessman George Patey. He took apart the wall brick by brick and gave each a number so it could be rebuilt. His family later donated the entire wall to the Museum.

Al Capone ordered this gun in 1928 from Parker Henderson Jnr before moving to Miami. It was seized in 2004 by the IRS who discovered it in an illegal gambling den in Kentucky.

Dubbed the first luxury resort in Vegas, The Flamingo opened in 1946. This menu is from the early 1950s and the poker chips are from its first year of operation. It was custom to also present a ceramic flamingo to each guest upon departure. 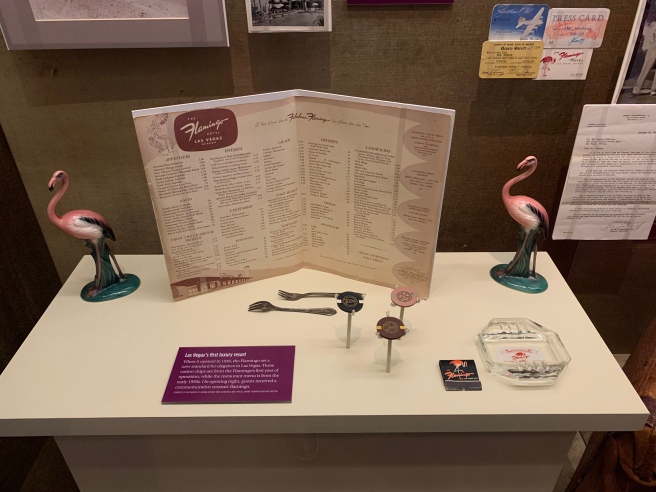 There is a room that explores the connection between President John F Kennedy and the Mafia. It offers a very interesting look into who may or may not have supported Kennedy to victory in Chicago. There is even a bullet from Jack Ruby’s gun on display. 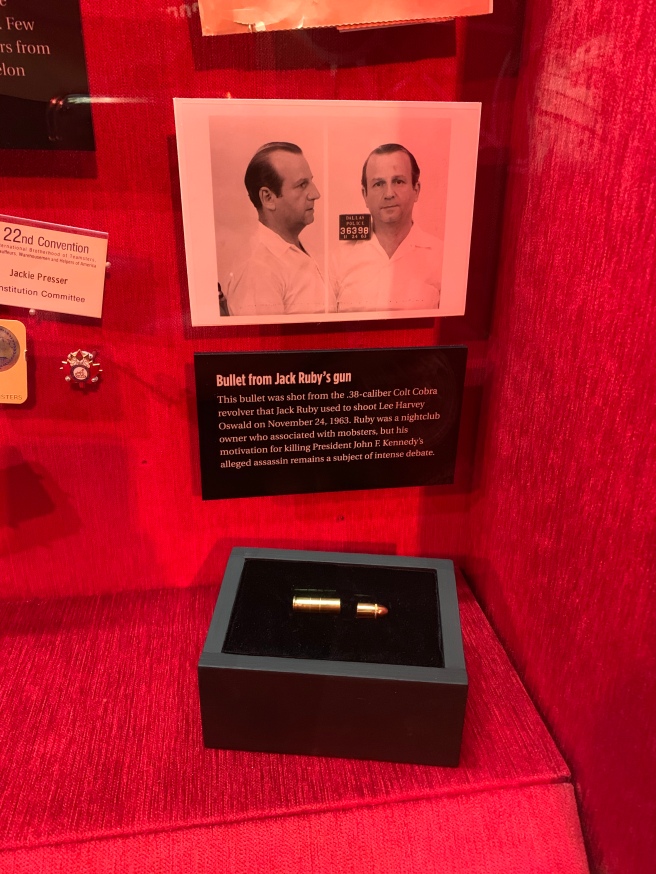 This is such a beautiful brochure of Las Vegas showing everything you can do in the City.

Although not a specific object in an exhibition, I have to share these mailboxes. On the ground floor, as soon as you enter, there are hundreds of original mailboxes from 1933. They are an amazing part of the building that have been preserved. 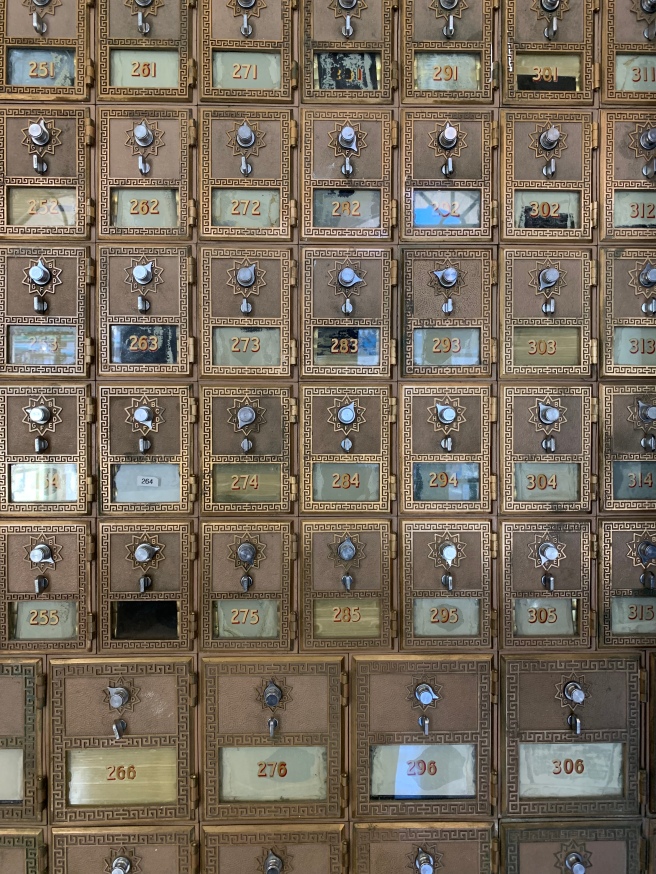 This is the final report on Capone’s tax evasion case compiled by Frank Wilson (document on the left). 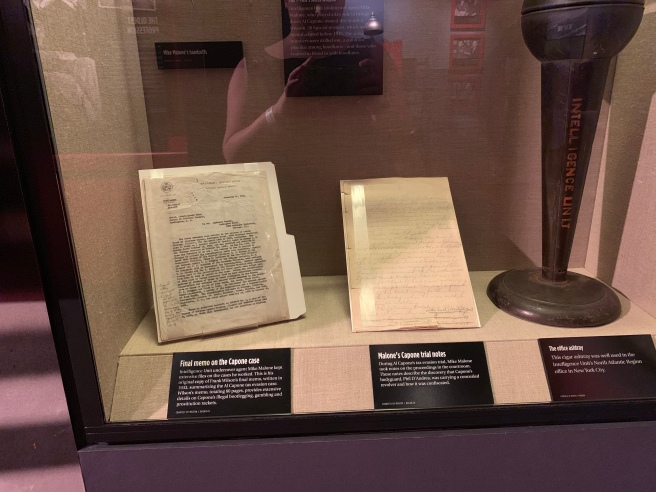 This phone booth once stood outside the Four Deuces in Chicago. This was the headquarters of the Chicago crime syndicate that was led by Johnny Torrio and Al Capone.

It is pretty hard to believe that between 1951 and 1963, Las Vegas residents and visitors could get up and close to nuclear bomb testing. As you can see, it makes for a truly terrifying photograph.

A letter sent to Elmer Irey in 1932, thanking him for his advice and assistance with finding his son’s kidnapper. If you’re unfamiliar with the story, Charles Lindbergh was a famous aviator whose baby son was kidnapped and murdered in 1932. A truly horrific case.

The Mob Museum is open daily from 9 am to 9 pm. The Speakeasy is open until 12 am. For more information you can find the website here.