This morning I spent two hours exploring the Sydney Jewish Museum. In 2017, a new permanent display on the Holocaust opened, covering everything from the start of the war to liberation and migration to Australia. I remember visiting the museum during my Master’s course in 2016 and walking through what was then a construction site. It was amazing to see the end result!

I’m going to break my review down into some general themes. I never had the opportunity to see the museum prior to its renovation so I won’t be comparing or contrasting the display to what it used to be.

Also, I want to just focus on the permanent display. As the name implies, the museum covers more than just World War II. For example, there was a fantastic section on establishing the Australian Jewish community. I had no idea there were sixteen Jewish convicts that arrived on the First Fleet. Opposite this, was a display on Jewish businesses that operated on George street in the 1800s. As you can see, the graphics were amazing.

And now, the permanent display.

Similar to quite a few other Holocaust exhibitions, the Sydney Jewish Museum approaches the event chronologically, displaying the history over three levels. The layout is directive and didactic. Whereas this style might not suit other exhibitions, in this case, it was the best option. Why? Because it gives you more of a sense of what there was before the Holocaust and finishes with not only loss, but, strength and hope. I will talk about my favourite part of the display later on in the post.

The first floor begins with the rise to power of the Nazis and the introduction of anti-Semitic laws and policies. Then you move through displays on the Holocaust itself, learn about liberation and see what happened after liberation. In the final section, there is a small display on Australia which I found to be very interesting. It was a part of the story I had obviously not seen outside of this country.

The entire exhibition had an effortless flow that focused on guidance, encouraging the visitor to engage along the way. I will also note that there are stairs between the levels, however, there is also an elevator making it entirely accessible.

Architecturally, the layout is stunning. The floors have been designed to form the shape of the Star of David. See below from some photographs. 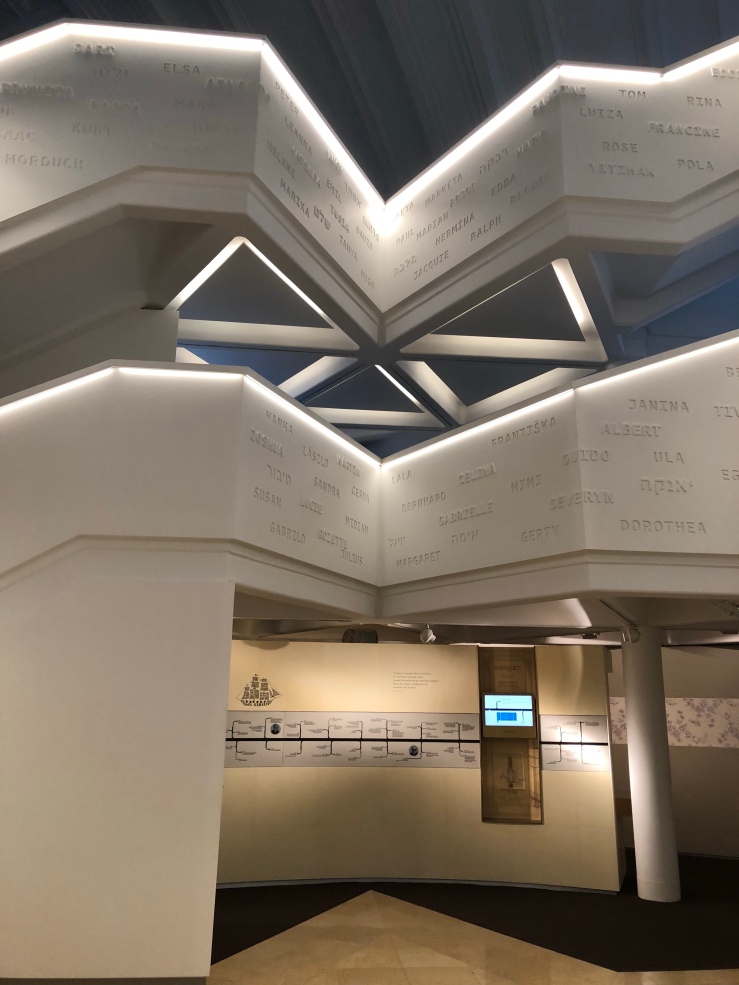 There are three main digital components I want to review: the app, touchscreens showing the various concentration and extermination camps, and the listening stations dotted around the permanent display.

The app is titled “SJM Voices” and it is worth downloading prior to visiting. If you arrive at the museum without headphones or a device, they have both available.

I can see the motivation behind the app. There is a pressing need to record the testimonies of survivors and have them available for all future visitors to hear. My experience, however, was not too good. I got frustrated trying to use the app and gave up listening in the first section. It was almost an information overload and I decided to prioritise reading over listening. In saying that, this was because I was seeing a survivor testimony. If this opportunity was not available, I might have listened to a few on the app. Over time, I think this app will have great potential.

Moving on to the giant touch screens that showed the concentration and extermination camps. They were a little bit superfluous in the space and didn’t add anything to my understanding that a static map would. They did show the geographical development of these sites over time, but, it seemed a lot of technology and space to achieve this goal.

Finally there were the listening stations. Finally a piece of technology I could get behind. Dotted around the exhibition were a few stations where visitors could place speakers to their ears and listen to firsthand accounts. These seemed better integrated than the app, in my opinion. I listened to a few on the ghetto experience which were heartbreaking.

This final theme I want to cover is a big one. I have selected four objects that stood out in the display.

This beautiful cross-stitched cloth was created by Else Schwartz in 1945/1946. The object has been used in the display to reflect hope after the war. The story accompanying the object tells of Else stitching this cloth while waiting for her husband and children to return from the camps. They were never reunited. It represents the emotions felt after the Holocaust and the individuals who had to wait for news of their loved ones.

Displayed floating in a clear box is this blouse that belonged to a sister of Hela Stein. Her four sisters did not survive and she is unsure of who this blouse belonged to. The object became a memory and something that Hela held onto for many years. It reminds visitors of the emotions that we can place on physical objects and the memories they can evoke.

This recipe book was owned by Edith Gombos and contains recipes favoured by Edith and her inmates in Ravensbrück. Edith recalls how they would create imaginary feasts to cope with their hunger pains. They spoke in hope that one day they would be able to share these meals again with those they love. 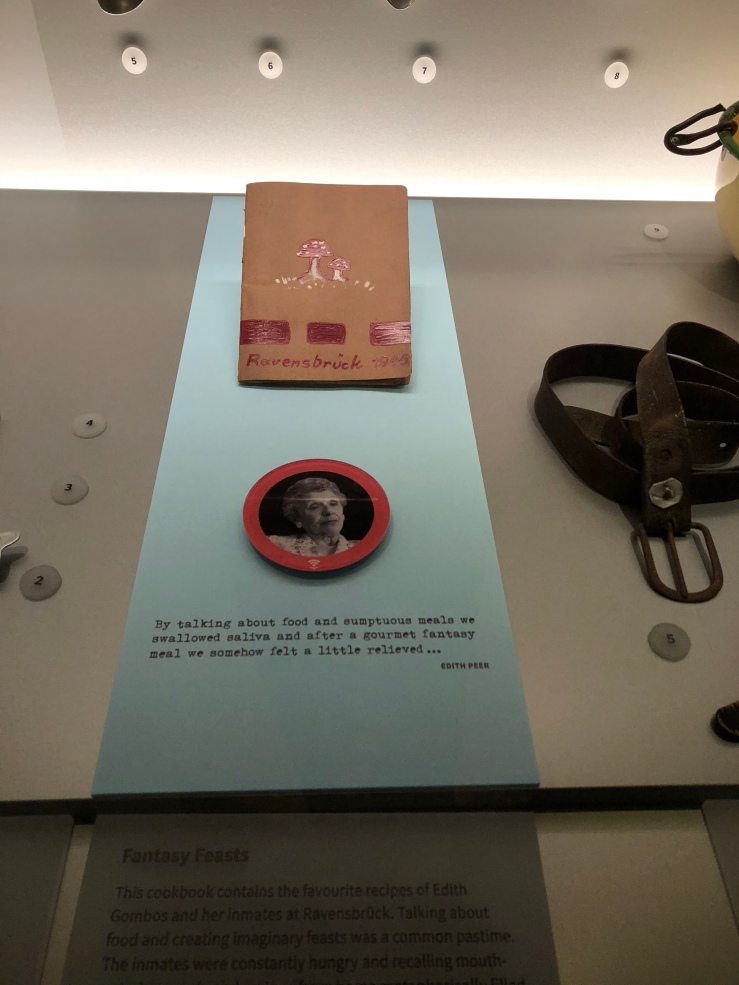 As I walked around the space, it was great to see how much agency was represented. There were an array of objects on display to represent how those in the ghettos strived to maintain their dignity. Friedl Dicker-Brandeis was a Bauhaus student who used her artistic skills to bring joy to children in the Theresienstadt ghetto. The collage of the flower was made by one of her students who later migrated to Australia.

If you are visiting, make sure to look at the exhibition Unseen Untold: Our Curious Collection. To celebrate 25 years of the Sydney Jewish Museum, there are 25 unusual objects on display. The objects tackle issues such as myths and authenticity. For example, bars of soap pictured below represented the myth that some soap was made from the fat of those who were killed. 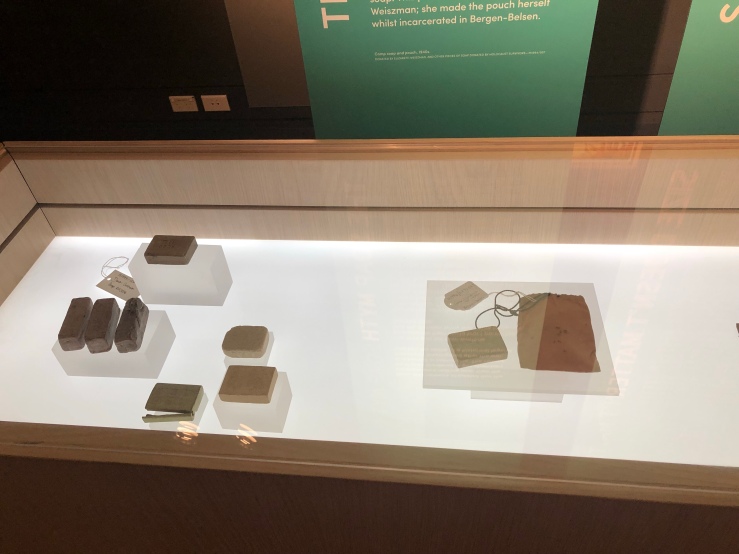 Also, in a blog first, I am including a special shout out to the bathrooms. On the back of each bathroom door was a small poster showing an object and a bit of information. Might as well keep learning no matter where you are in the space!

The Sydney Jewish Museum is easy to get to on public transport. Their “visit us” section on the website is one of the most comprehensive I have ever seen so check it out here if you’re planning a visit: https://sydneyjewishmuseum.com.au/visit/plan-your-visit/.