On our final day in Honolulu we visisted the stunning Ioalni Palace located in the Capitol District near Downtown Honolulu. The palace was built in 1882 by King Kalakaua and served as home for the last reigning monarchs of Hawai’i. In 1962, the palace was registered as a National Historic Landmark and is the only royal residence in the United States.  Visiting both the Bishop Museum and Iolani Palace truly allowed us to gain a much deeper understanding of Hawai’i, its culture and its history.

There are two main ways to explore the palace, by guided tour or by audio guide. We decided to opt for the guided tour as audio guides can be a little frustrating. Both tours run through the first and second level of the palace. 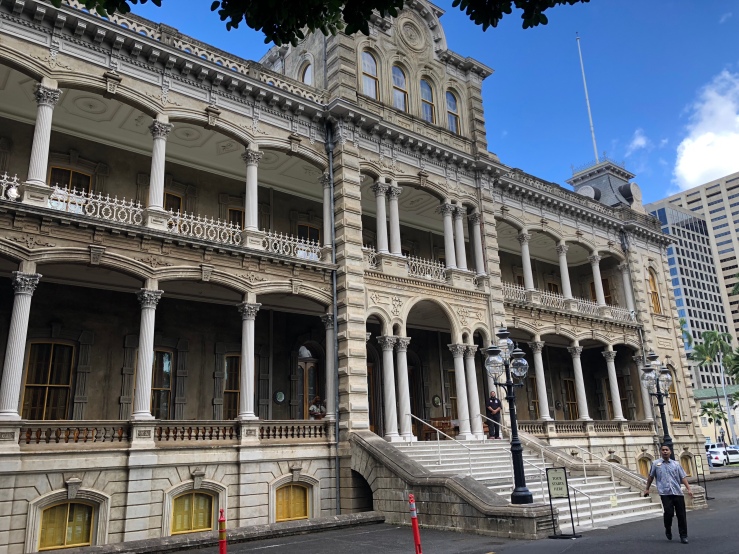 The basement level is open for self-guided tours and is a great place to start. It contained an assortment of objects, photographs and palace furniture. In one room visitors had the opportunity to help curate new exhibitions by writing their questions and thoughts on post-it notes and sticking them to relevant objects/ideas for display. There had been a significant amount of interaction which was great to see. As King Kalakaua was the first monarch to travel around the world, it was great to see they’re thinking of an interactive map table that will show his travels.

After exploring the basement, we headed upstairs to meet our guide. Over the next hour, we explored the entire palace and learnt more about the Hawaiian royalty and the eventual annexation by America. I wish I could remember the name of our guide, but, due to a combination of jet lag and having a terrible memory, his name has escaped me. It’s a shame because he gave such a good tour!

The rooms on the first level were all public spaces, meaning open to individuals who had been invited to the palace. After a quick tour through the main entrance space and dining room, we headed upstairs to the private quarters.

The stories shared on the second level focused more on the royalty themselves and their personal lives. For example, in the room adjacent to the King’s bedroom, we learnt that King Kalakaua was a good friend of Thomas Edison who convinced him that electric lighting was the future. Equipped with this information, King Kalakaua returned to Hawai’i and installed electric lights in all rooms of the palace. It was electrified before the White House and before Buckingham Palace.

The following captioned photographs will provide a visual tour of the palace. Enjoy!

All of the furniture and fittings you can see are original. At the moment, Friends of Iolani Palace are attempting to retrieve as many original pieces from the palace as possible. When the royalty was overthrown, the majority of the palace’s contents were sold at auction.

If you are planning to visit during a peak tourist season, I strongly recommend you book online. We were lucky that there were two spots available when we arrived!