Yesterday was our final day exploring Los Angeles. We have had an amazing time enjoying some of the museums and heritage places on offer. This morning, we joined Los Angeles Conservancy Walking Tours for an Art Deco tour of Downtown LA. In total, we visited 12 stunning examples of this architectural style. Our guide, Janis Ashley, was so knowledgeable and presented such a fascinating tour. It was less about the niche architectural features and more on the stories of the buildings and their owners.

We started, however, with a quick refresher on what makes a building Art Deco. This style was popular from circa 1925 to the start of World War II. It was named after the Exposition Internationale des Arts Decoratifs held in Paris in 1925. There aren’t any hard and fast rules for what makes a building Art Deco. Some constant features include vertical lines that draw the eyes up and ornamental features.

On the tour, we saw many different types of Art Deco. We were also able to enter a few of the buildings and view the interiors. Here are the buildings that featured on the tour!

The first stop on our tour was the Title Guarantee Building. Once an office building, it has now been adapted into loft apartments. There were a few features highlighted including Gothic elements such as flying buttresses and a huge tower. 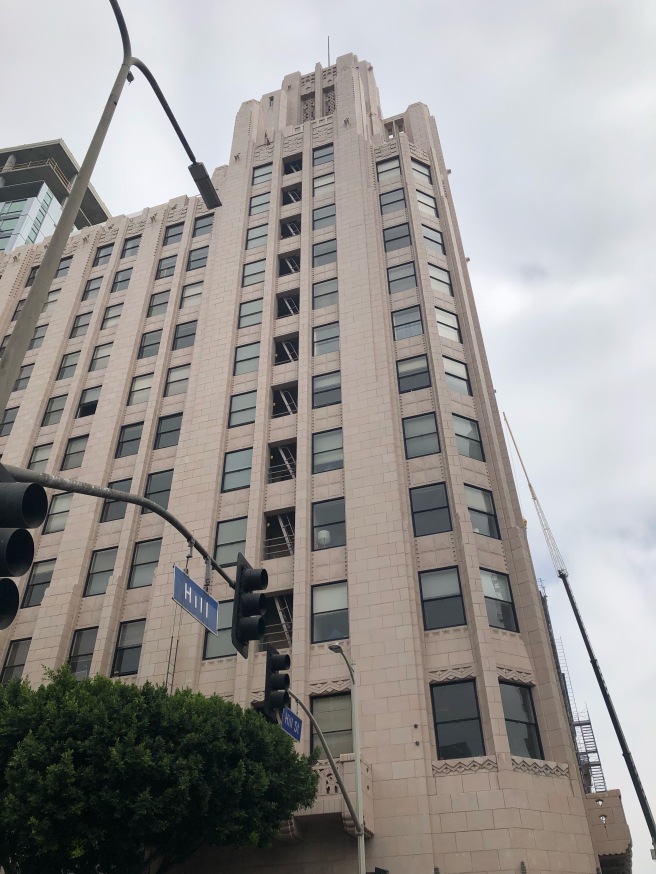 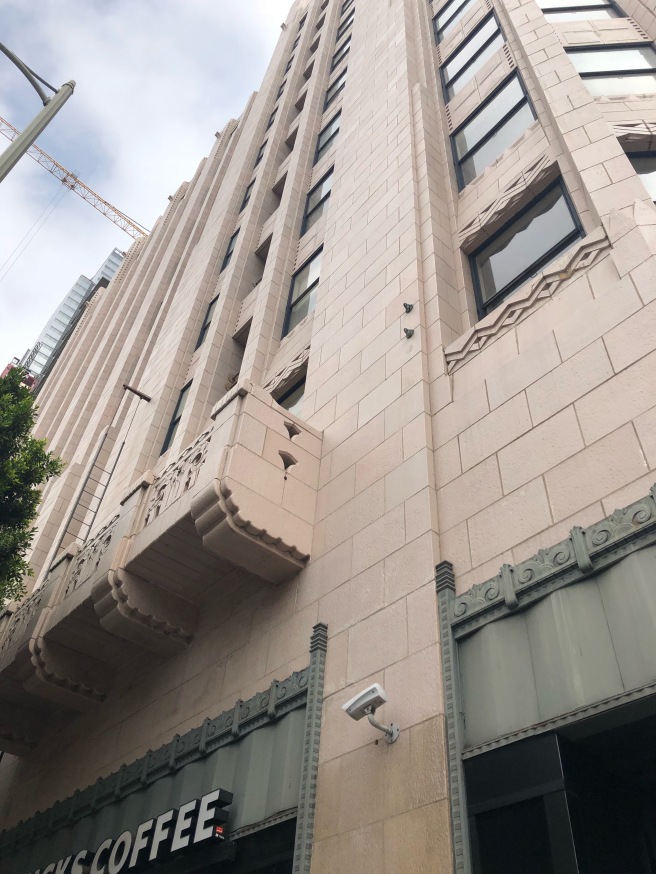 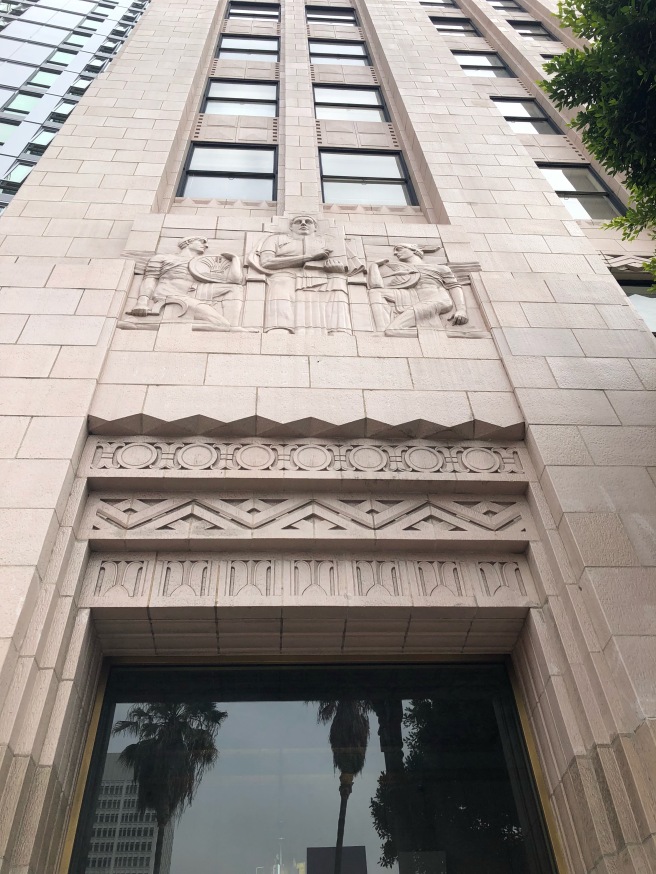 If you have ever seen a film from the 1920s or 1930s, it probably had a scene or two set in Bunker Hill. Today, the street is filled with modern high rise buildings. In the past, however, old Victorian terrace houses lined either side of the road. Allison & Allison, added the Edison Company Building, pictured below, in 1931. It stands opposite the Los Angeles Central Library and has been able to retain most of its original features.

This was the first Building we were able to look inside. As you can see, the interior architectural features are absolutely stunning. Everything from the elevators to the large oil painting of ‘power’ in the lobby is original Art Deco. 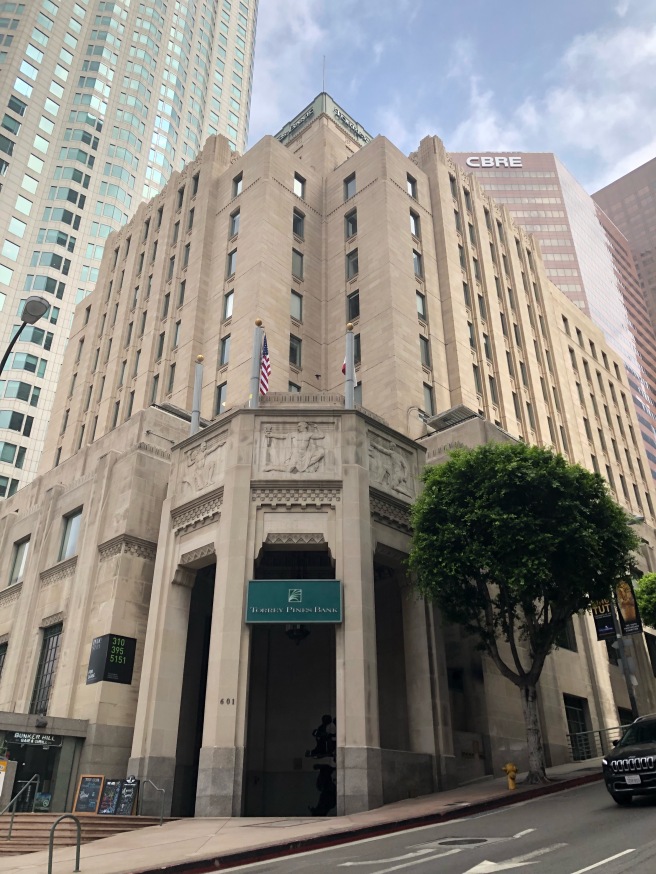 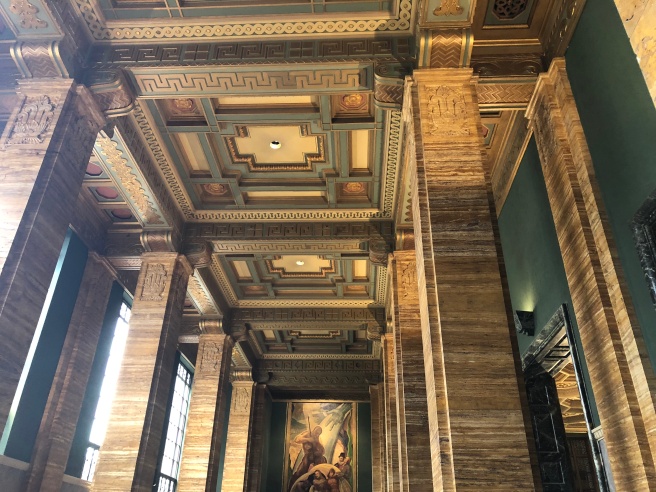 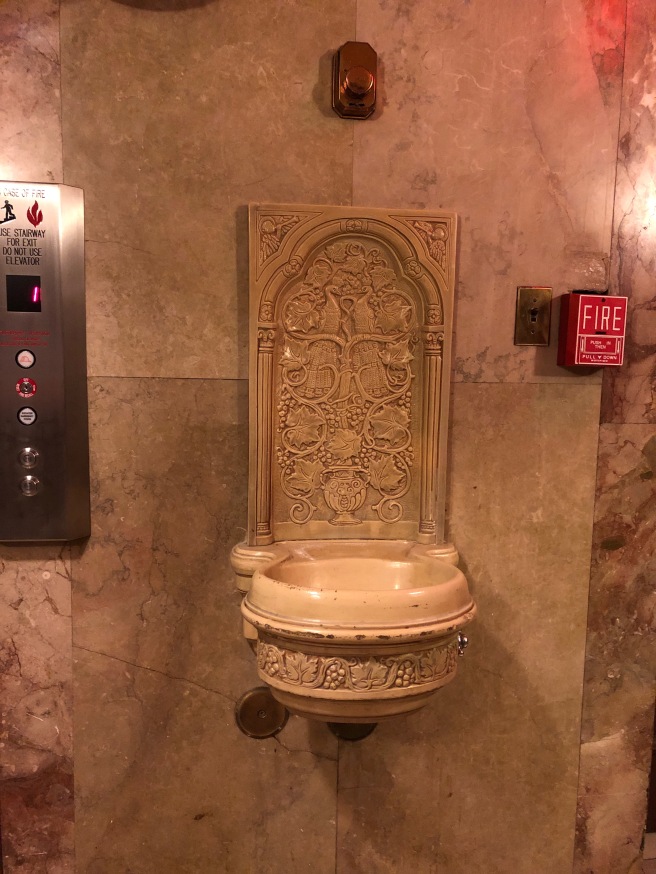 This one breaks my heart a little. Forty years after the most impressive Art Deco structure was built in Los Angeles, it was torn down. The building was primarily black with gold features including gold angels that ran around the top edge. It has been replaced by an extremely tall modern high rise.

This is a happier story of a building saved from demolition. Scheduled to be torn down in the 1970s, the Los Angeles Conservancy fought for the survival of the original Los Angeles Central Library building. The reason for its proposed removal was that the building was too small. After negotiations, it was decided that an extension would be built and floors added beneath ground level. The library has a beautiful mosaic pyramid on the top supporting the torch of knowledge. 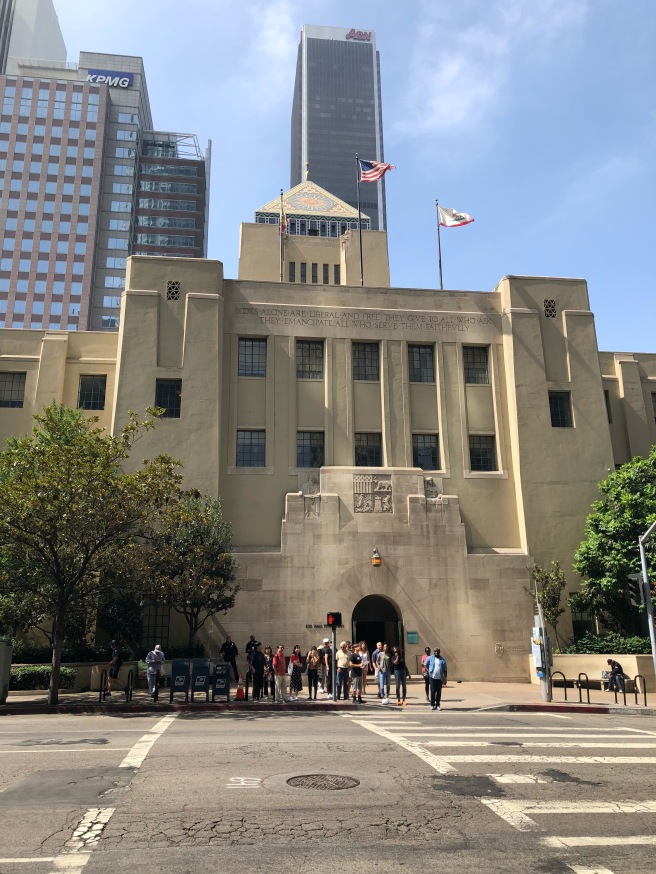 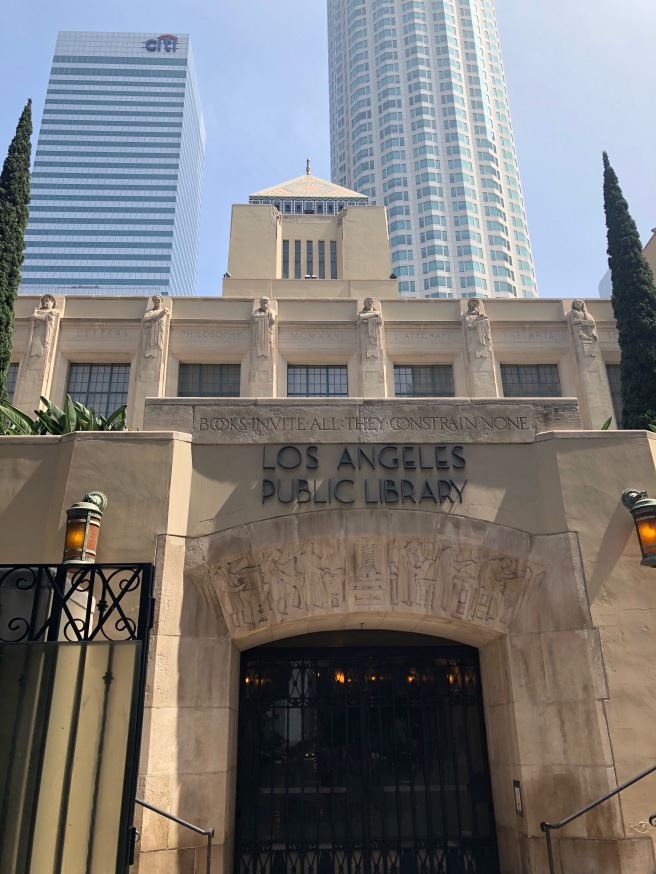 The Pacmutal Center was originally built to resemble a Greek temple. In an attempt to create retail space at the base of the building, the facade was re-designed in 1936 to appear more Art Deco.

This was my absolute favourite building. Originally, it was a high-end fashion department store built in 1928 and owned by James Oviatt. It was filled with Lalique glass, however, much was sold in order to pay tax due on the building. Today, it is a restaurant called Cicada.

We weren’t allowed to enter the building, however, we could peek through the door. Inside there are two stories filled with old glass display cases and store furniture. Some of this furniture included large cabinets filled with tiny drawers for keeping ties and sock garters. In the middle of the room are three beautiful chandeliers that were actually used in American Horror Story, Hotel. Mixing the old with the new! 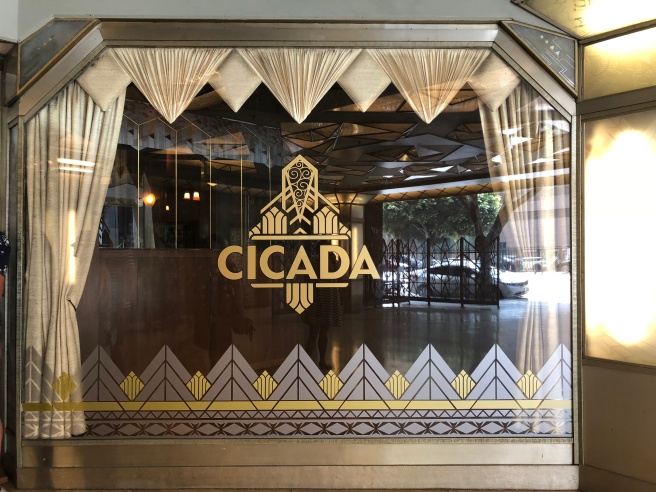 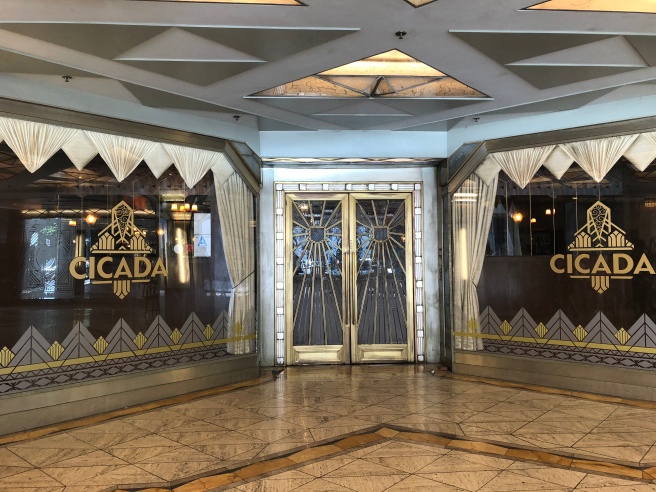 The next three buildings are all located in the jewelry district, now used as stores and apartments. The building below was originally built for William Fox of Fox Studio. The beautiful mauve exterior set it apart from the previously visited buildings.

These two buildings were right next to each other, built almost a decade apart. Los Angeles Jewelry Center, constructed by Claud Beelman in 1931, is the sea foam green building. The Wholesale Jewelry Mart is a more subtle Art Deco example with small gargoyles surrounding the exterior.

This was the only example we saw that combined Art Deco and Art Nouveau styles. While the fundamental structure was very Art Deco, some of the decorations on the building, such as floral swirls, harked back to the earlier style.

This was a quaint Art Deco example with an ornate entrance and original features inside. 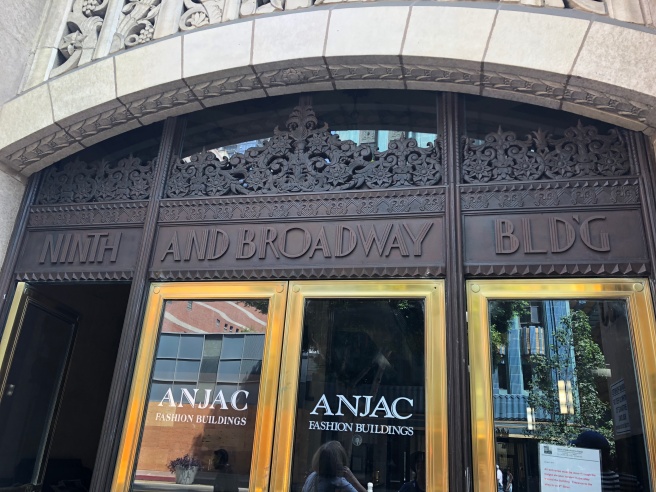 Our final stop was at the Eastern Columbia Building constructed in 1930. Originally, it was a department store with all eleven levels displaying goods for purchase. It is one of the most recognisable Art Deco buildings in Los Angeles! This is mainly because it is such a vibrant green/blue colour and has a functioning clock on the tower. Similar to the first building, the exterior has been saved and the interior adapted to now be just over 140 apartments.

Even if you are not that interested in the Art Deco style, this tour showed a completely different side of Downtown LA. You can find more information about the tour here.