Hello readers! It has been a while but I’m back again with a guest post. I recently took the opportunity to visit the Australian Museum so that I could see the temporary exhibition currently showing, ‘Mammoths – Giants of the Ice Age’. I also wanted to check out the newly renovated Westpac Long Gallery. When I arrived, however, there were signs everywhere stating that the gallery was closed due to some sort of technical problem – but more on that later.

A quick note on ticketing – I had checked online prior to visiting and established that my Museums Australia membership, which usually allows for free admittance to the Museum, did not allow for a discounted ticket to this paid exhibition. This was fine, however, the ticketing officer who served me seemed desperate to offer me some sort of discount (was I a student? Or Westpac customer?) and when I mentioned I am a Museums Australia member I was given a discounted rate. There are no less than twenty-one (yes you read that right, twenty-one) different ticket prices listed on the website for this exhibition. This seems like overkill to me and obviously left me confused. But, I digress.

The main selling point of the Mammoths exhibition, and the draw card that successfully motivated me, is that it has on display, on loan from The Yamal-Nenets Regional Museum Exhibition Complex named after I. S. Shemanovsky, the most complete woolly mammoth specimen that has ever been found. While most of us are probably familiar with the fact that woolly mammoths are giant creatures, the specimen on display, named Lyuba (‘love’ in Russian), is very small. She is about the size of a large dog, which makes sense given that she was one month old when she died, about 42,000 years ago. She also lost most of her distinctive fur while she was lying in mud and ice for over 40,000 years. Her skin and trunk are both mostly intact and well preserved. Lyuba was fascinating to look at and I learnt a lot from the peripheral information provided that related to her as an object. I was somewhat interested in the fact that she is still discussed as the most ‘intact’ specimen. This is despite the fact that scientific work undertaken following her discovery led to the removal of a significant-sized portion of her abdomen, so that her stomach contents could be examined. There was no evidence of this autopsy work on Lyuba herself, she has since been put back together, but there were images of this work in the exhibition space. There are a couple of interesting documentaries you can watch on this too. I guess I was interested in the implications of calling a specimen intact when it has been taken apart and put back together again. I guess there are no rules in this area and, from experience, the semantics and implications of language used in museum spaces can be really tricky.

‘Mammoths – Giants of the Ice Age’ represents a great example of an exhibition that revolves entirely around a single object or specimen. Usually when an institution is hosting a thematic exhibition, there will be a range of objects to choose from when deciding what to include in their display. However, this broad spectrum of objects is not always available, depending on the theme of the exhibition. This was certainly the case for Mammoths. Especially considering that Lyuba is the most intact specimen on earth (I gather her age and size have something to do with this) and the obvious fact that mammoths of all types have been extinct for quite some time now. The result for any such exhibition is a significant amount of peripheral information and objects or displays, not directly related to the topic of the exhibition (eg. not actual mammoths) but still informative when shown in the same context. I had anticipated that this might be a little draining or boring – reading a lot of information without any associated objects. This was only partially the case for me. There was a lot of text, but I found this informative and helpful and learnt a lot I didn’t already know, such as that there were two kinds of mammoths – Woolly Mammoths and Columbian Mammoths. Columbian mammoths frequented North America rather than Asia and Europe and were not woolly.

As a result of the lack of actual mammoths available for display, we did see a lot (read: too many) femur and mandible bones and casts of bones in their place. I also found the way all of the didactic information was displayed to be pretty cheap in a visual sense. They looked as if someone had whipped them up in WordArt the day before they went to the printers. This textual information was also often accompanied by a really distasteful and headache-inducing holographic 2D image. I found this aspect of the design to be really poor quality and not at all in keeping with the Australian Museum’s usual high standards. Another aspect of the design that I didn’t love was that it appeared as if the museum had squished together other displays from museums around the world who had recently staged a mammoth or Ice Age-themed exhibition. I haven’t spoken much about the second half of the exhibition, which is where this apparent technique was most obvious.

The second half focused on other types of mammoths, not woolly, and other Ice Age animals that the mammoths would have lived alongside. This provided some great context and allowed me to build a clearer mental picture of the time and world being represented. I don’t know if they were trying to achieve this or not, but it’s the effect that was given. It wasn’t inherently bad, but this mishmash of displays wasn’t inherently good either. I have since read that the exhibition was ‘created by’ The Field Museum. This wasn’t clear to me in the actual exhibition, but perhaps goes some way to explain the unusual design.

Overall, I would certainly recommend a visit to see Mammoths at the Australian Museum. It is being marketed to school age children given that it’s largely on display over the summer holidays. In saying this, unless you are some kind of mammoth expert I can guarantee you will learn something no matter your age. There were some fun interactive aspects as well as some kid’s activities (some of these were noisy – too noisy to be in an exhibition space in my opinion). 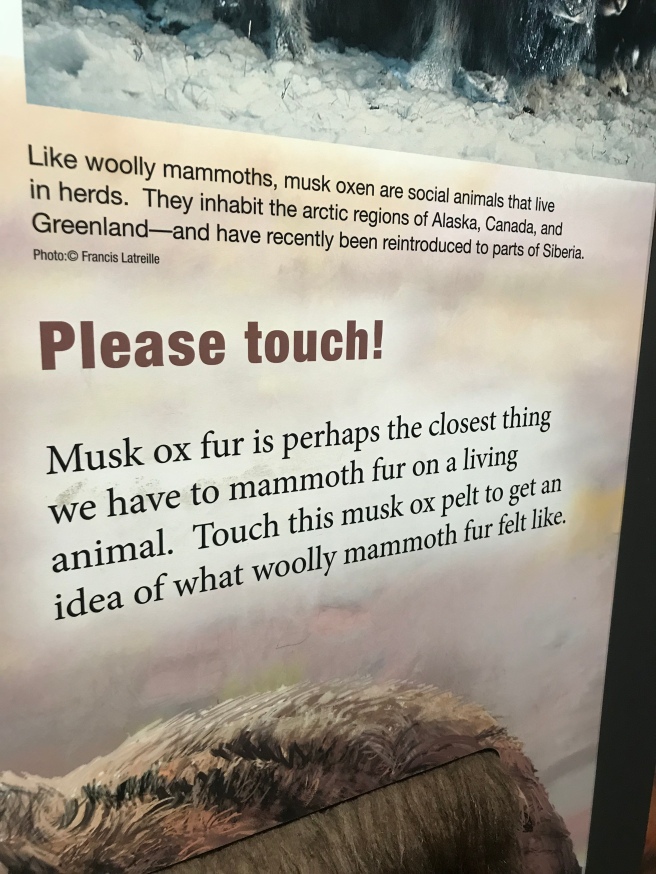 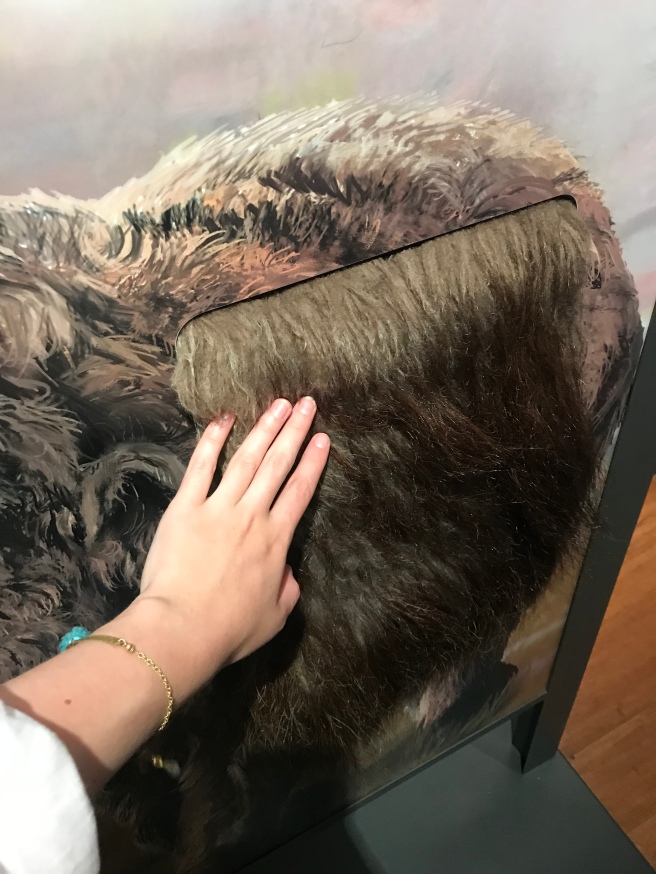 You can see ‘Mammoths – Giants of the Ice Age’ at the Australian Museum in Sydney until May 13th 2018.

While visiting Mammoths, I also spent a short time visiting the newly refurbished Westpac Long Gallery and the First Australian’s Gallery, as my companion had not seen either of these spaces for some years. Despite the signs on entry warning us that the Long Gallery was closed, we happily found it had reopened by the time we were finished with Mammoths. Two brief comments on these spaces. The Long Gallery was so refreshing compared to how it used to be, all credit to those who worked on it as it looks amazing. It was great to see previously unused architectural features, such as the beautiful staircases, in use again. However, I was really troubled to see an Egyptian mummy on display. The mummy was wrapped but uncovered, in full view, and there were x-ray’s and other scans on display. I find this particular display of human remains (where permission cannot be sought and was not given) to be really problematic. A visit to the First Australian’s Gallery should be mandatory for all Australian’s, no exceptions. It’s representation of Aboriginal and Torres Strait Islander culture is leaps and bounds ahead of its previous iterations and has been known to move visitors to tears.

A huge thank you to Imogen for another excellent guest post! It is always great to read about exhibition design and what works/what doesn’t work.

View all posts by imogenkennardking