Thanks yet again to Bec for sharing her blog space with me. This, even more so than my previous posts, will be entirely biased as I am a huge fan of John Olsen’s work, and was very eager and excited to visit his new retrospective at the Art Gallery of New South Wales (AGNSW). To me, Olsen’s work is immediately recognizable and quintessentially Australian both in its style, aesthetic, and through the exploration/celebration of the natural environment. This is despite the fact that much of his work was inspired by his time spent in Spain.

Based on past experiences of major exhibitions at AGNSW, I was expecting the exhibition to be very busy and crowded. To my delight, however, the exhibition space was almost empty when we arrived (tip – Wednesday afternoons are a great time to visit, as the Gallery is open late on this day. I think most people were saving their visit for later in the evening to attend the special events). This might seem an odd thing to dwell on, however, I find the busyness of an exhibition space, particularly for art exhibitions, to be a really influential factor in how I am able to experience and enjoy the display.

The display itself was laid out chronologically and included works from all of the different themes and physical forms that make up Olsen’s catalogue. While I say that his work is immediately recognizable, the aesthetic of his work, including the colours and forms used, did vary quite significantly over the course of his career (which is continuing, Olsen continues to paint at age 89). This was reflected well in the exhibition. He has also worked in various formats, which is something I wasn’t fully aware of prior to seeing this exhibition. On display was his more widely known works on paper and large-scale paintings, as well as pottery work and two of nine tapestries designed by Olsen. Prior to visiting the exhibition, I had seen pottery and crockery pieces decorated with Olsen’s designs for sale in the Gallery shop in association with the exhibition and assumed they were a somewhat gimmicky tie-in. I was, however, pleasantly surprised to realized that such pieces had actually been made by Olsen throughout his career and make up an important part of his body of work.

There are two artworks in particular I would like to discuss. The first is Olsen’s Five Bells (1963) (pictured below), which is probably my favourite piece of Australian art I have ever come across. It is a part of the AGNSW permanent collection, and I let out an audible gasp when I saw it on display in the exhibition. Like most of his paintings, Five Bells is quite a large-scale piece and has a dominant presence in the room given the vibrancy and depth of the colours used. Given this nature of the works being displayed, I was glad to see the generous spacing used in the layout of the artworks in each of the rooms.

The other work I wanted to mention, Summer in the You Beaut Country, was one that obviously inspired the title of the exhibition and was quite heavily advertised in the lead up to the exhibition’s opening. This painting, another large-scale piece, was commissioned for Olsen to paint and is a ceiling piece, meaning viewers can best view it by lying down underneath it and looking up. In a video interview playing elsewhere in the exhibition, Olsen explained that he felt it made perfect sense to depict the sun as a ceiling painting given this is how we normally see the sun.

While it’s an intriguing concept, I found it interesting that he didn’t feel the need to paint the sun from this perspective in the majority of his other works. While it was fun to be able to experience a piece in a slightly different way in such a formal setting (see picture of me demonstrating how the painting was viewed), I did feel the display would have benefitted from more explanation on how the painting was supposed to be viewed, as only myself and one other visitor laid down to view it while I was there. Others looked at me very strangely while I did it and largely ignored the painting – a shame when it was this piece that inspired the exhibition as a whole. The chairs chosen could also have been more thoughtfully considered – they were very uncomfortable and did not allow viewers to lie flat, meaning that it was impossible to view the whole painting at once, and viewers had to change seats at least four times to get a good view. Obviously, this was enough to put most people off. To end on a more positive note, I cannot speak highly enough of this exhibition both in regards to the approach to the display and the extensive overview it provides of Olsen’s body of work. It was great to see so many works from private collections on loan, being shared with a wider audience. You can see The You Beaut Country at the AGNSW until June 12.

As always Imogen, it’s a pleasure sharing your work! I cannot wait to see this exhibition for myself! To finish, here are some more of Imogen’s photographs from the exhibition. 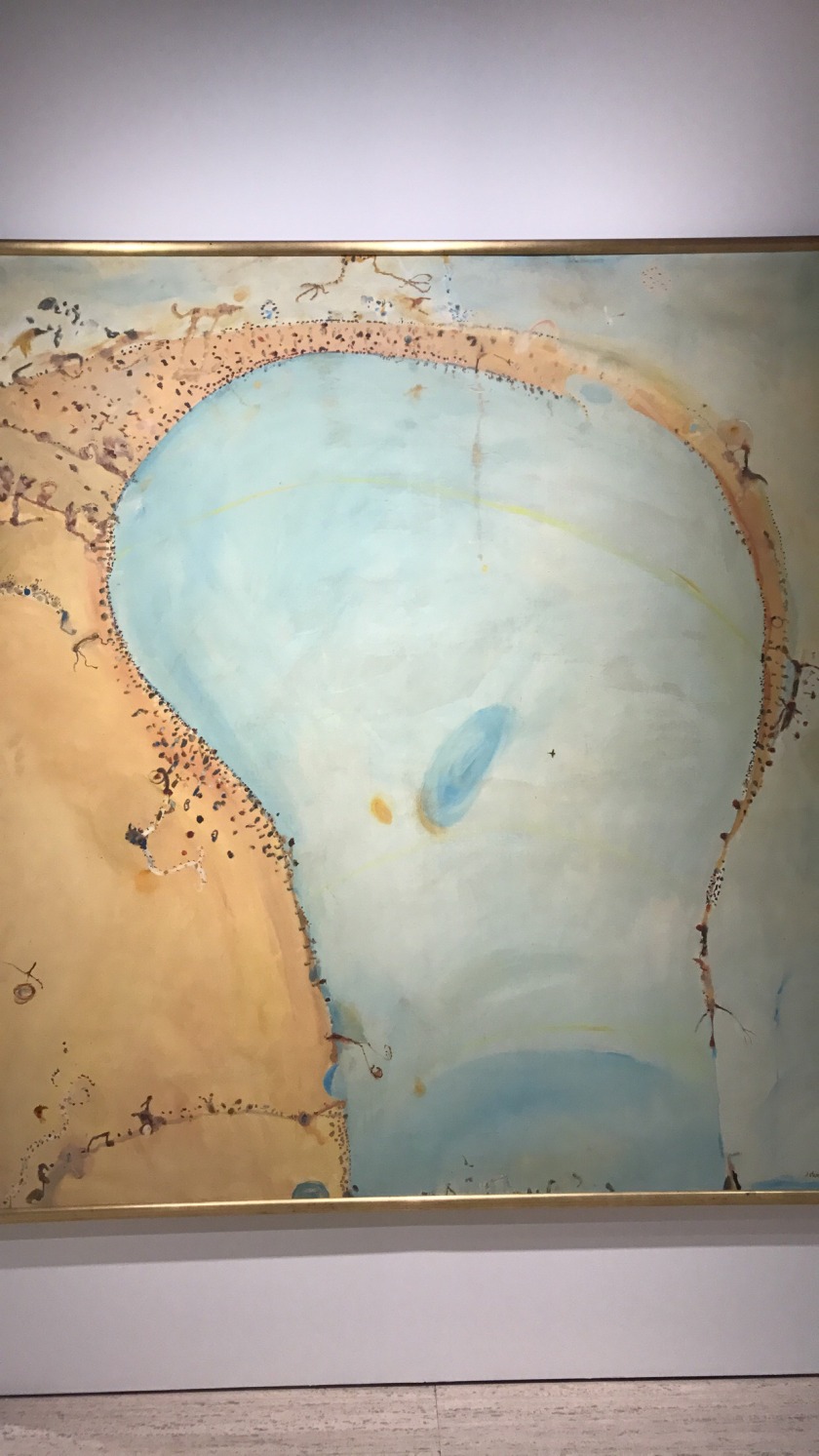 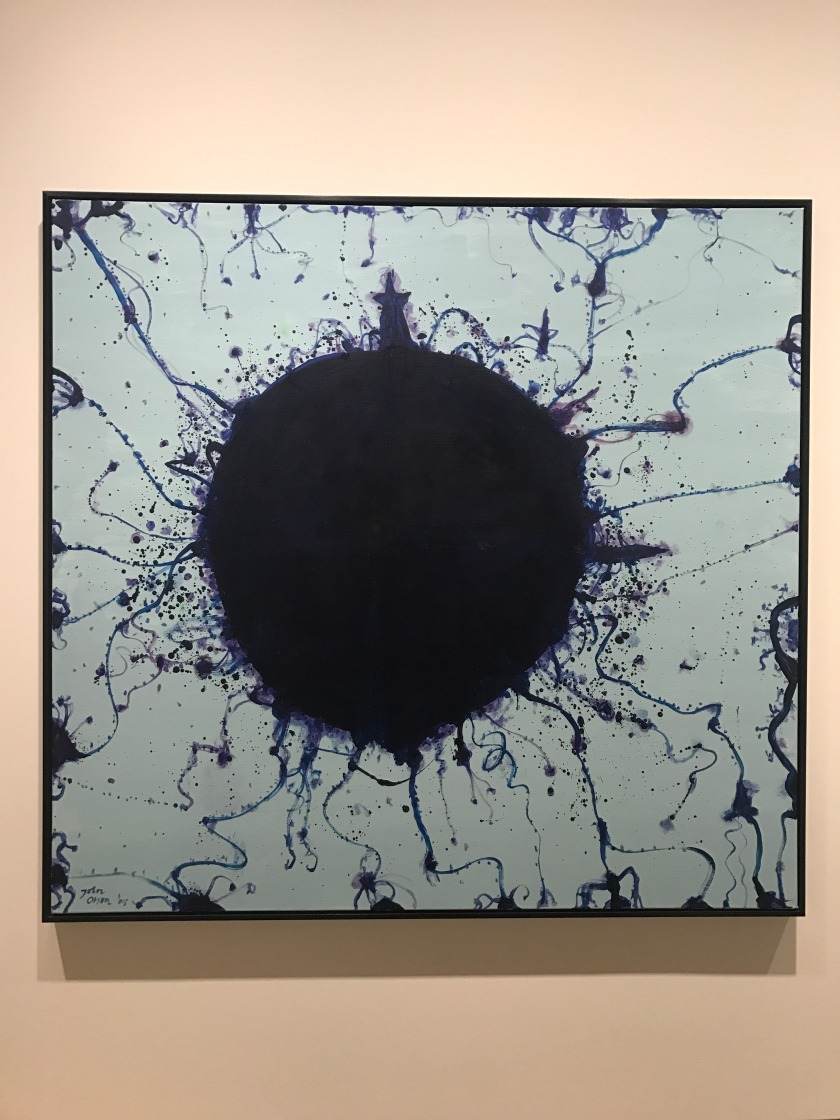