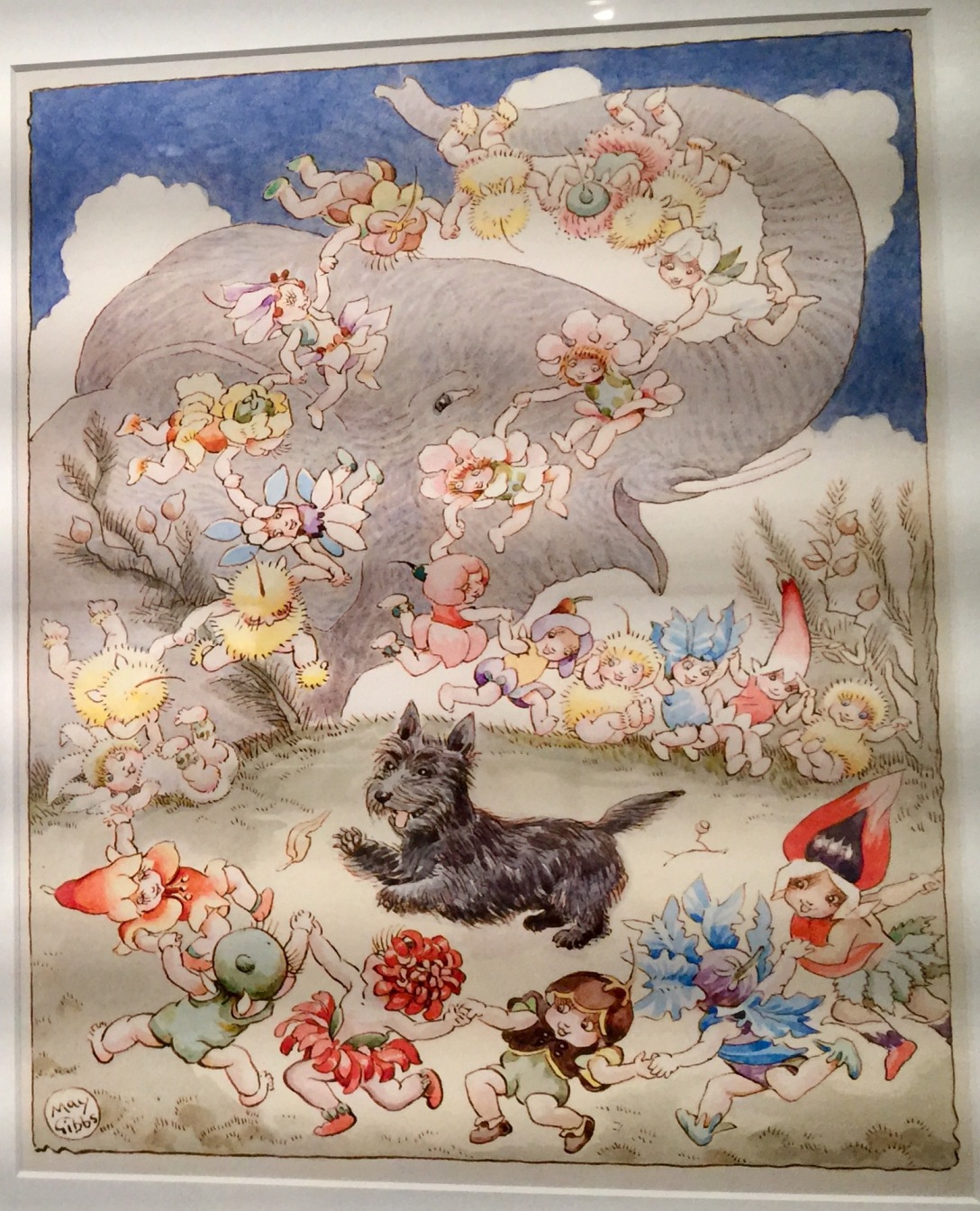 The following blog post will contain two perspectives. I am going to start the post reflecting on the Snugglepot and Cuddlepie anniversary display and the talk at the State Library of New South Wales. Imogen will then write her thoughts on the talk.

To celebrate the centenary of May Gibbs Gum-Nut babies, the State Library of New South Wales has curated a small display of sketches and organized a lunch time talk with Robert Holden. For those of you reading who did not grow up in Australia, the Gum-Nut babies by May Gibbs is a series of children’s books that follow the adventures of cute little gum-nut (Eucalyptus nuts) characters. They are well-known and well-loved in Australia. 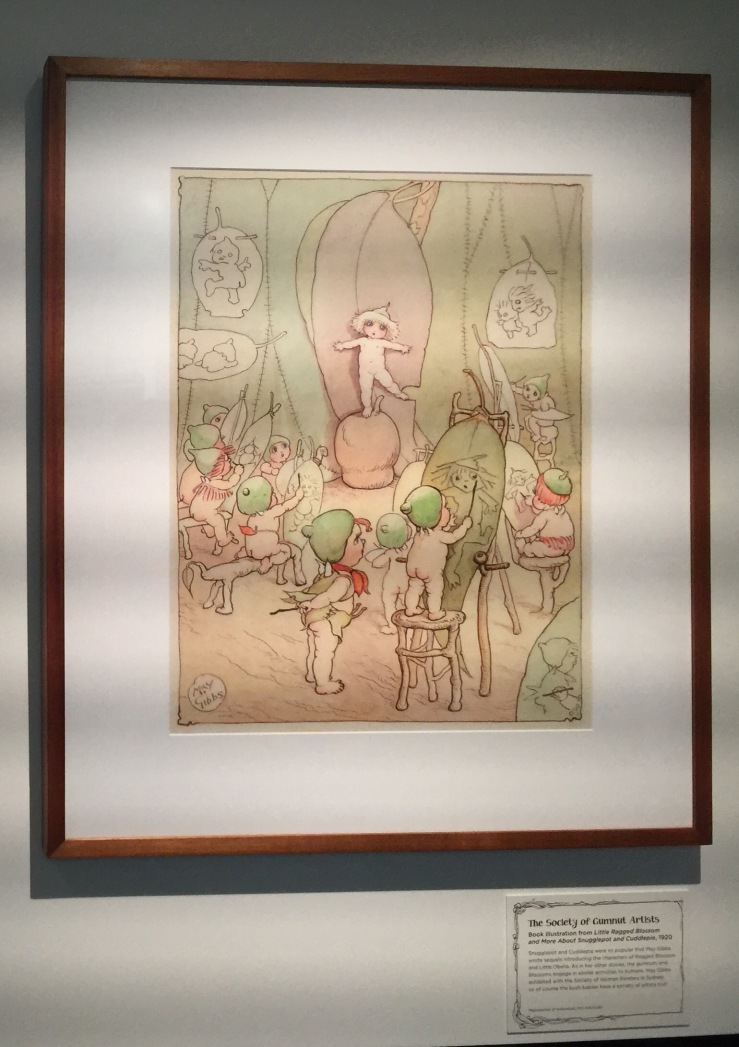 I remember the books from when I was little so I was very excited to see some of the early sketches. I am hesitant in calling it an exhibition considering it was small and consisted of artworks hung along a corridor. There wasn’t really an atmosphere created. The introductory panel is great in providing a summary of the gum-nut babies and Gibbs’ life. They are not original sketches which raises very interesting debates over how authentic is the display. 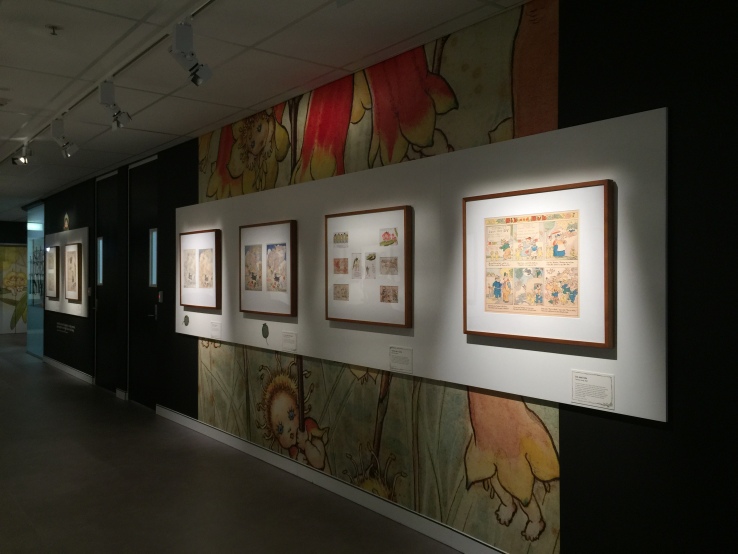 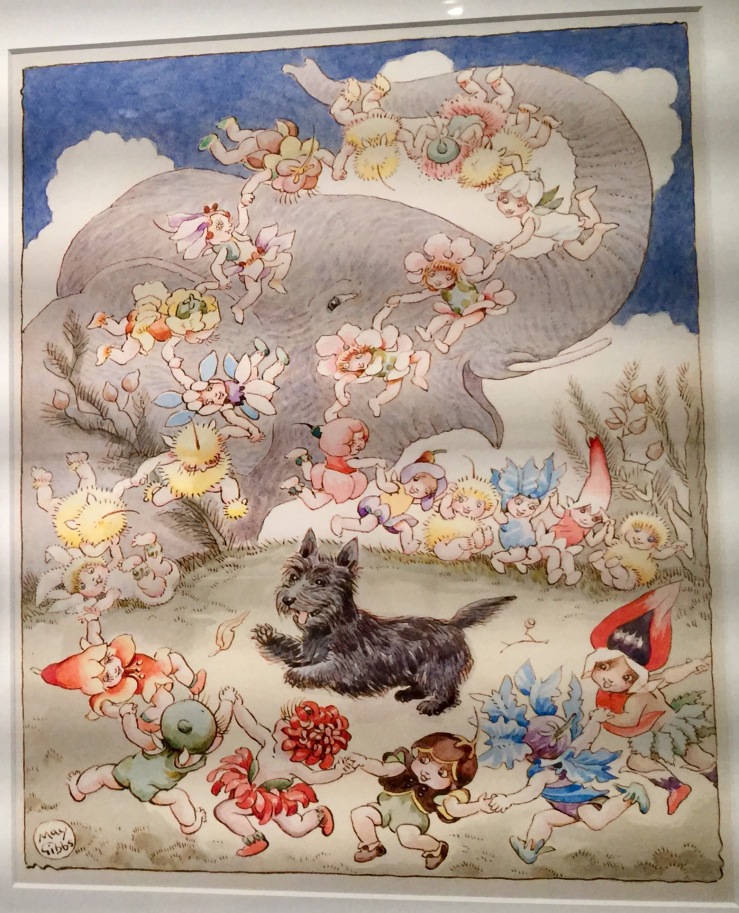 I really liked this one sketch (pictured below) of a dog with gum-nut babies dancing around. The display had four of these prints showing how the images developed from black and white sketches to colour prints. Besides from the gum-nut babies, Gibbs was very active in the Suffragette movement in England. A copy of her sketch for The Common Cause journal is also on display. 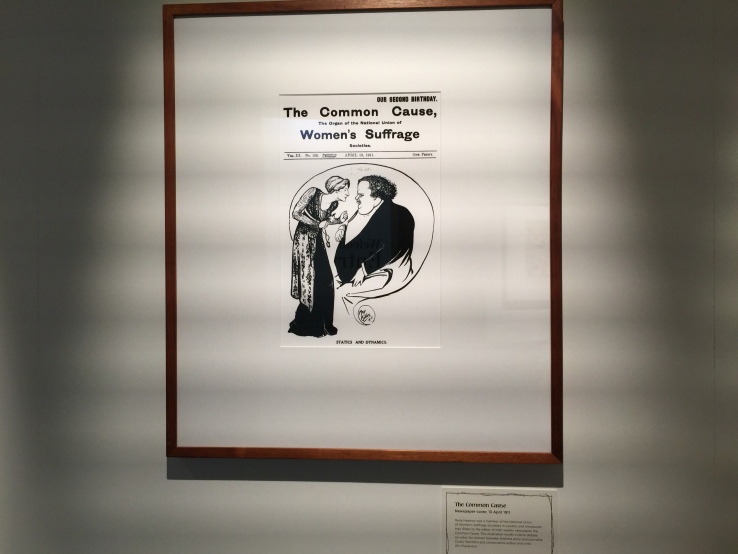 What I really encourage visitors to do is walk through to the Amaze Gallery. Right now, there is a great collection of ephemera on display relating to the 1879 International Exhibition in Sydney. There is a great map showing the ground of the exhibition and the various stall holders. The books reminded me of the ones I worked with at the Queensland Parliament Library! 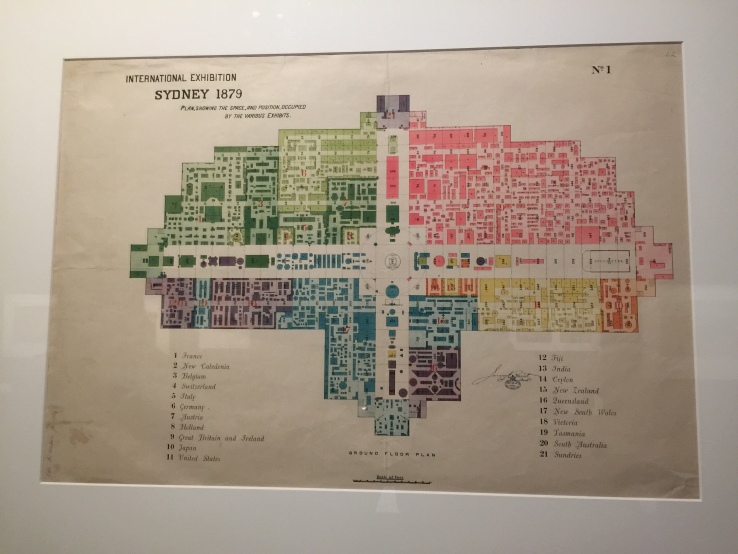 At the back of the Amaze Gallery are some original works by May Gibbs. There is a cute collection of gum-nut babies calendars and some original prints. I enjoyed seeing these more than the prints in the commemorative display. 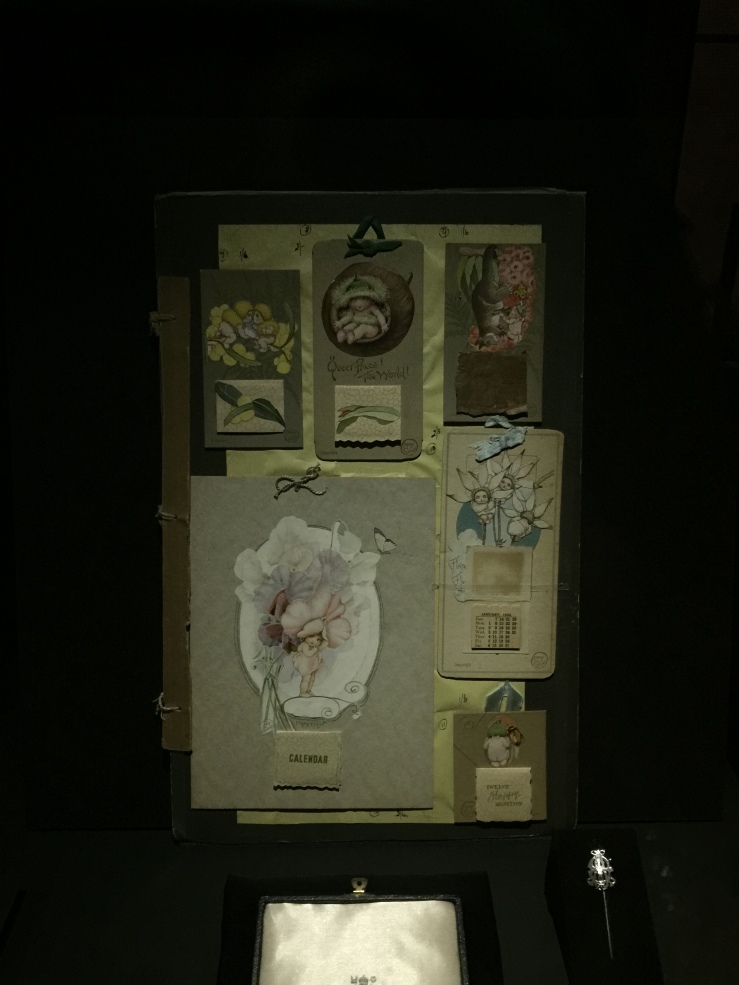 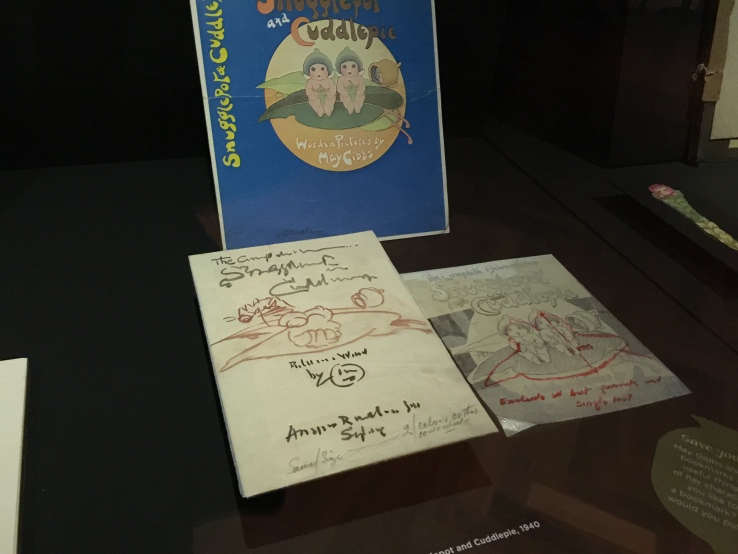 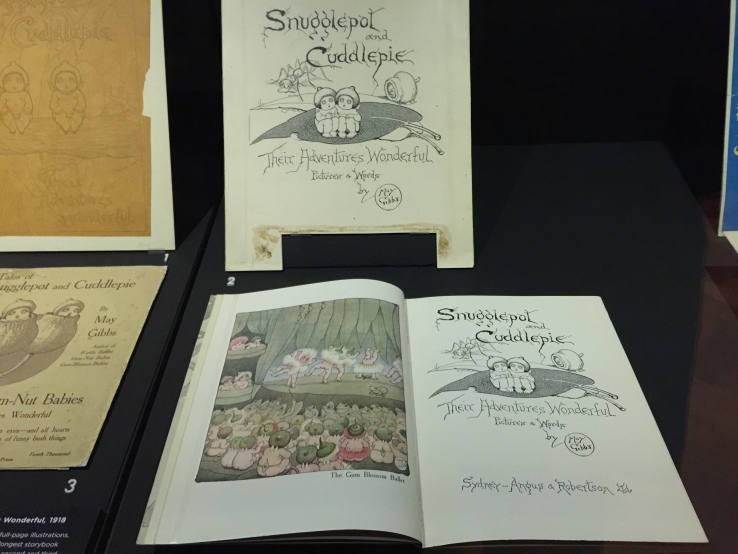 After seeing these displays I was ready for the lunch time talk. Robert Holden is an expert on Australian children’s books. He presented on his work with the Mitchell Library (within the State Library of New South Wales) and what he uncovered in their collection. This included a lot of May Gibbs postcards that were sent to soldiers fighting during World War I. According to his research, they were very treasured objects, often kept with personal letters and diaries.

It was also interesting to hear the contrast between May Gibbs and Norman Lindsay (who wrote the Magic Pudding). Especially considering Lindsay’s work was published in many different countries whereas Gibbs only really found an audience in Australia. It would be great to hold another talk on May Gibbs focusing on her time with the Suffragette Movement. Understandably, Holden ran out of time to cover even just one her books let alone more of her life! It just seems like a very interesting period of her life that would challenge this image of her solely as a children’s author.

Imogen is virtually an expert herself on May Gibbs so I cannot wait to read her thoughts on the talk. 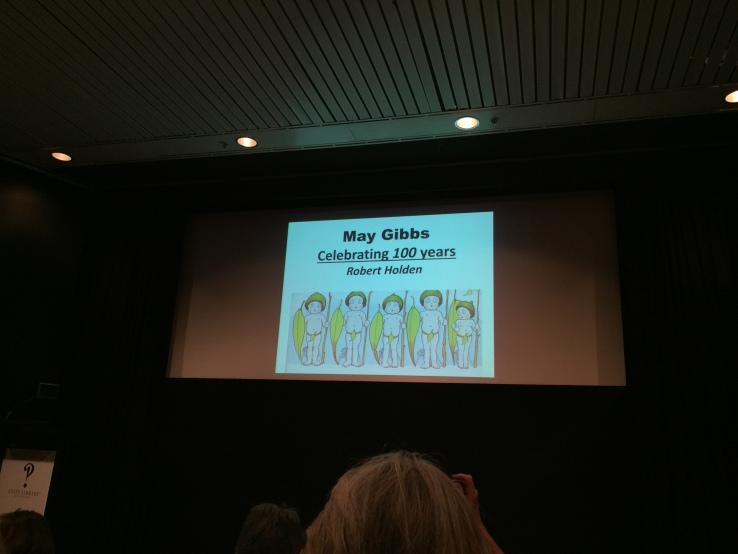 While I’m not exactly an expert, I’m certainly a big fan and great admirer of May Gibbs and her work. I, like most Australians, grew up with her books and have loved them and their uniquely Australian aesthetic and narratives since then. I developed a greater appreciation for Gibbs’ work after I completed a class during the Museum and Heritage Masters program called ‘Backstage at the Mitchell Library’.

In this class, the students were given a truly behind the scenes experience of the Mitchell Library (a part of the State Library of NSW, and more of an archive than a library in the traditional sense) as we were able to choose any object from the library’s collection to research, study and write about over the course of the semester. I chose the original manuscript works of May Gibbs, which are stored in the Mitchell Library’s archive, on behalf of the Northcott Society and the Cerebral Palsy Alliance – the two charities that have owned the copyright to her work since her death.

Throughout this process I learnt so much about Gibbs herself and her work, as well as gaining an understanding of the way she is represented in and understood by society. One of the most fascinating aspects of my research was discovering May Gibbs’ involvement in the suffragette movement in England, and how she used her artistic skills to engage in this social upheaval. As Bec mentioned this was discussed in the talk by Robert Holden, however I can’t help but be dismayed by how often this important and political aspect of her life is so often ignored and downplayed in both critical discussions of her work and in the formation of a perception and representation of the author/artist.

I have encountered this systematic underplaying of the political aspect of her life many times, and am always surprised by the traction it receives. During the audience Q and A at the talk, one audience member announced that Gibbs was categorically A-political, and that her connection to movements such as the suffragettes was purely to document facts, rather than to choose a political side or have a voice of her own. I can’t help but disagree with this view, as in my opinion any woman choosing to work for pro-suffrage publications and involving herself in war efforts and public heath campaigns (Gibbs did all of the above and more) is truly interested and engaged in social and political events. To argue that she is A-political seems to suggest she had no opinions or motivations of her own, other than writing children’s stories.

Despite my own research, I learnt more still about May Gibbs at the library talk, which was presented in such a fascinating and engaging way. It is always a pleasure to hear someone discuss their passion in an engaging, articulate and knowledgable way. For anyone who is interested in this topic and missed the talk, I would strongly encourage you to find a copy of Robert Holden’s commissioned biography of Gibbs ‘More Than a Fairytale’ – it is the foremost text available on the topic and includes some beautiful copies of her original illustrations.

Thanks to Bec for coming with me to the talk!

This post was co-written by Imogen Kennard-King. Her email is: Imogenkennard.king@gmail.com.