The following is part 2 of yesterday’s museum adventures. I’ll start by saying we didn’t really plan on visiting the Design Museum. I stumbled across it whilst googling what to see around the Medical Museion. What’s pretty cool is that the Design Museum is housed in part of the former Frederiks Hospital. Its collection includes furniture, textiles, and art. The mention of textiles caught my eye so I added it to our itinerary. Not only does it contain one of Denmark’s largest textile collection, but, they have made a great effort to place the majority of pieces on display.

The museum itself is beautifully designed. The grey marble floors and spacious display areas allow it to feel very accommodating. The entire museum is on one floor and you must walk through each section to see the next. Although we weren’t there to see the Japanese design exhibition, we walked through and were pleasantly surprised to learn the similarities between Japanese and Danish design.

The textile display starts right at the end of this space. You first encounter a folding screen which states the title of the exhibition and the themes it will cover. In total, there are three themes – design and decoration, body and identity, and handcrafts and industry. Each theme has its own printed stitch pattern that repeats itself throughout the exhibition indicating what thematic panels belong to which theme.

To be honest, I spent more time closely observing the textiles on display as opposed to reading every panel. For this reason, I am going to write about my favourite textiles.

Inside the first room was a selection of children’s caps all so delicately embroidered. One had been sewn together utilising different fragments of fabric that I later discovered were from a variety of different time periods. Another was a girl’s christening cap from 1750 covered in a very fine layer of silk. I really liked how they were displayed all together. You could appreciate each individual cap and the entire collection simultaneously. 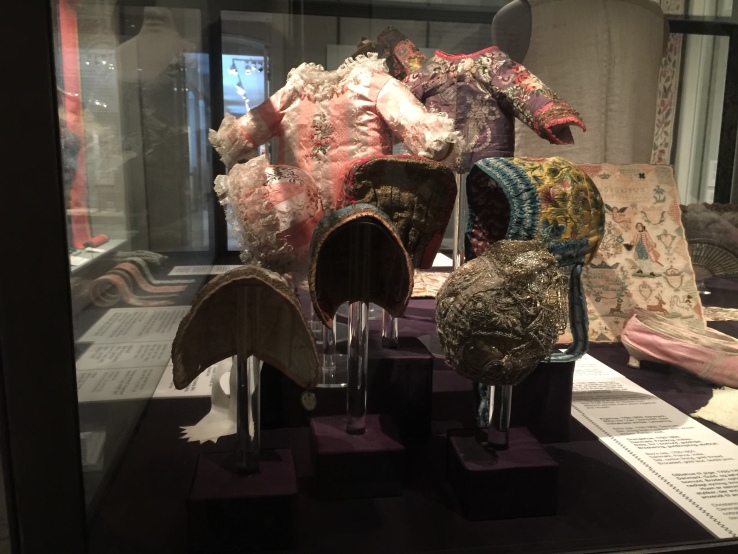 In the same room as the caps were quite a few embroidered samplers. They ranged from quite basic to stunning. My favourite was the one pictured below. It was stitched in Denmark circa 1757. There is so much detail stitched into the satin backing including the figure of a woman and numerous animals. It amazes me how the colours of the thread remain so vibrant. As it was in a pull out drawer and stored away from constant light, hopefully these colours will continue to be protected.

What appeared to be a very plain item of clothing was actually one of the most significant on display. This dress was worn during the reform movement in the 19th century to protest clothing such as laced corsets. It is, therefore, meant to be loose-fitting and less restrictive than the clothing of previous decades. This specific dress was manufactured in Denmark by the department store Magasin du Nord.

This display of ribbons was, aesthetically, very effective. They shared one label that literally read “silk ribbons 19th century”. Whilst not exactly the most informative label, I enjoyed looking at each piece of ribbon and seeing how it had been made and the different stitches that covered its surface. The first ribbon in the second row, green with large red flowers and other flower motifs, was particularly beautiful.

Similar to the caps and ribbon, I have selected this dress because of how it was displayed. Rather than placing the dress on a mannequin and moving on, more thought has gone into the display as a whole. For example, the hat has been suspended from the roof and rests just above the dress. You can begin to picture someone actually wearing the hat with the dress, enhancing both its appearance and contribution to the outfit as a whole.

The Design Museum did have other displays focusing on furniture and homeware. Whilst I thought those exhibition spaces were also well designed, it was the textiles that I found to be most interesting. Considering the variety of content and the way in which it has been displayed, this is a must-see museum if you are visiting Copenhagen.