Although I have been working on Cockatoo Island for just over a year now, I’ve never truly taken the time to walk through the Shipyard Stories exhibition. The exhibition is set in a beautiful sandstone structure that was originally the superintendent’s house from 1839 to 1859. Its various rooms have been recently transformed into gallery and museum spaces.

A quick history of the house. It was built by Charles Ormsby, the first superintendent, in 1840. He was a pretty awful individual. When he was fired, the second and final superintendent, Gother Kerr Man, moved in along with his twelve children. Needless to say the house required an extension and was transformed into the large building it is today.

What I enjoyed most about this exhibition was the level of collaboration between the curators and those who worked on the island in the shipyard from the 1960s to the 1990s. What was excellent to see at the end of the exhibition was a book where people could add their own stories and experiences. I flicked through some of the entries and what has been documented is amazing. I think including the community in this way will yield some great and diverse insights that could potentially be incorporated into our tours or other exhibitions in the future. 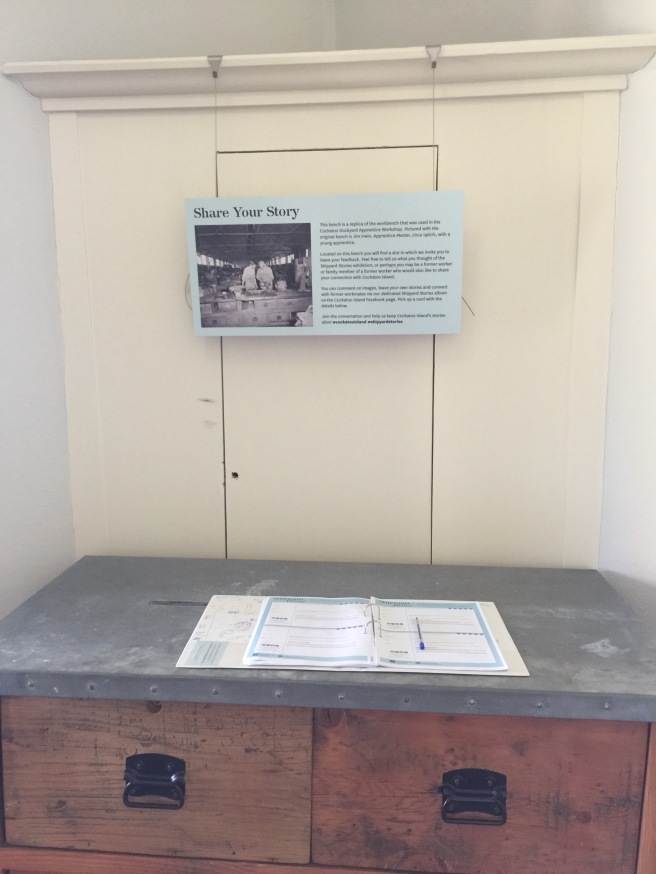 What else was interesting to see were the thematic panel boards and display cases manufactured from parts of old machinery and ships left on the island. To provide some context, Cockatoo Island was a shipyard from the convict era until 1992. In 1992, the Australian Government withdrew their building contract and the island was abandoned. Ten years later the Sydney Harbour Federation Trust took ownership of the island. A wonderful team of volunteers have since followed including some who once worked in the shipyard. They have done amazing work restoring old machines and utilising scraps etc to create the panels and cases for this display. It was an addition to the exhibition space that had great impact.

Each room in the house was uncluttered and easy to manoeuvre with photographs hanging down the wall and, at most, one display case in the corner. The photographs were a fascinating mix shedding light on both work on the island and also, more broadly, life on the island. There was even a little display concerning love on the island.

In a couple of the rooms were audio visual displays. One was a loop of archival film footage of the shipyard. The other room had a projection of still photographs. I didn’t spend much time in these rooms as I enjoyed walking through the house and seeing the photographs on the walls. I found the timeline near the beginning to be very helpful in contextualising the photographs and some of the panels. It was also lovely and colourful so catches your eye on entering the space.

Two more things to mention before wrapping up this post. I got way too excited seeing some areas of wall that had been scraped to reveal the different layers of paint colour. I remember learning about this technique at Brighton in the Regent Town House. The original cream colour now covers the walls.

Finally, one of the rooms contains contemporary paintings or visual memoirs by Bill Nix who worked on the island during the 1960s and 70s. His work captures aspects of his time on the island including the areas he worked and the machinery he used. They depict how he viewed the island both then and now. It added another method of interpretation to the exhibition and, in the space of one room, communicated the significance of this era continuing today.

As the convict buildings on the island are what draw crowds in, it was great to see this other history represented and displayed. It’s a nice exhibition if you find yourself on the island wanting to actually see what life was like when it was a shipyard. Even if you’re not interested in shipbuilding history, there will be at least one photograph that ignites your imagination. 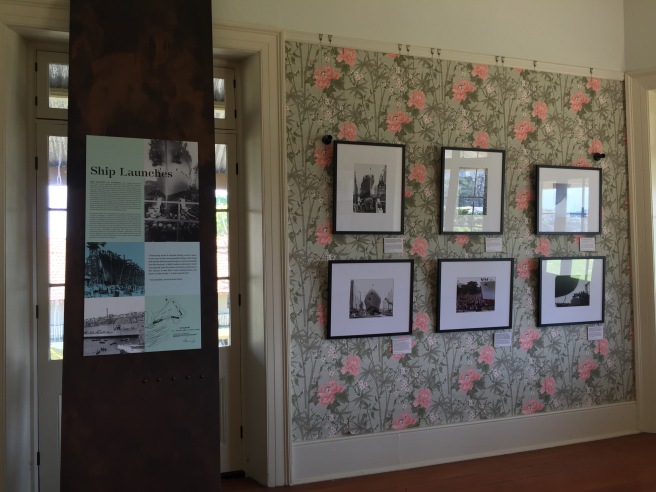