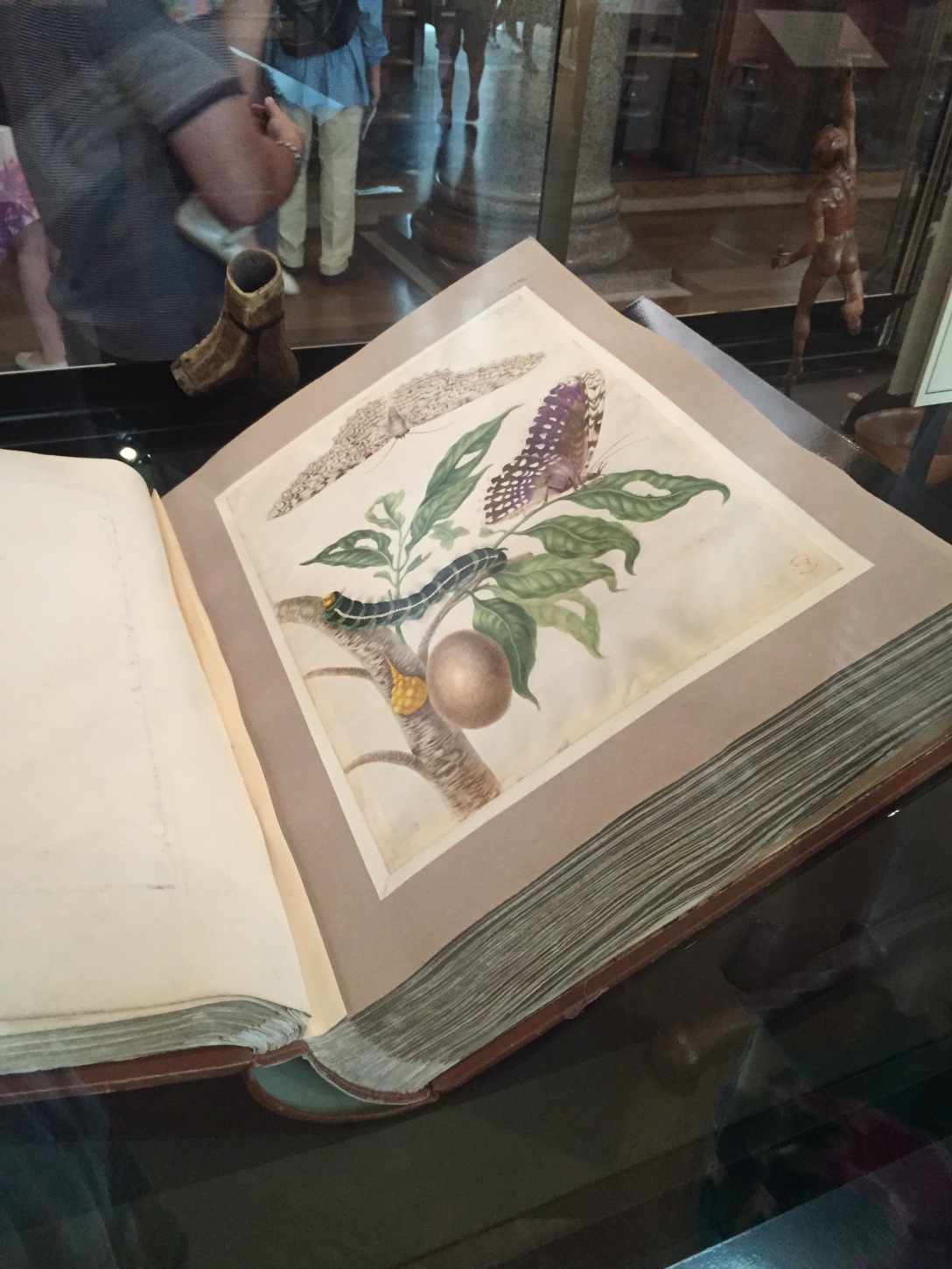 I want to start this post a little differently to what I have done before. This is mainly because the first two hours of our time at the British Museum was spent enjoying being visitors and noting the forms of interpretation evident in the Enlightenment Gallery. Although containing fantastic objects and a wealth of information, topics such as colonization etc were not mentioned which I found quite odd. The following are my Top Five objects in the Enlightenment Gallery!

No. 5 – Tiles from Alhambra

These are located in Case 18 titled Languages and Translation. As you can see in the photograph there are four beautifully decorated tiles with Arabic inscriptions. These were collected by Anne Seymour Damer from the Alhambra Palace in Spain in 1791. They are beautifully decorated and served to aid English scholars in discovering the root of their modern language. 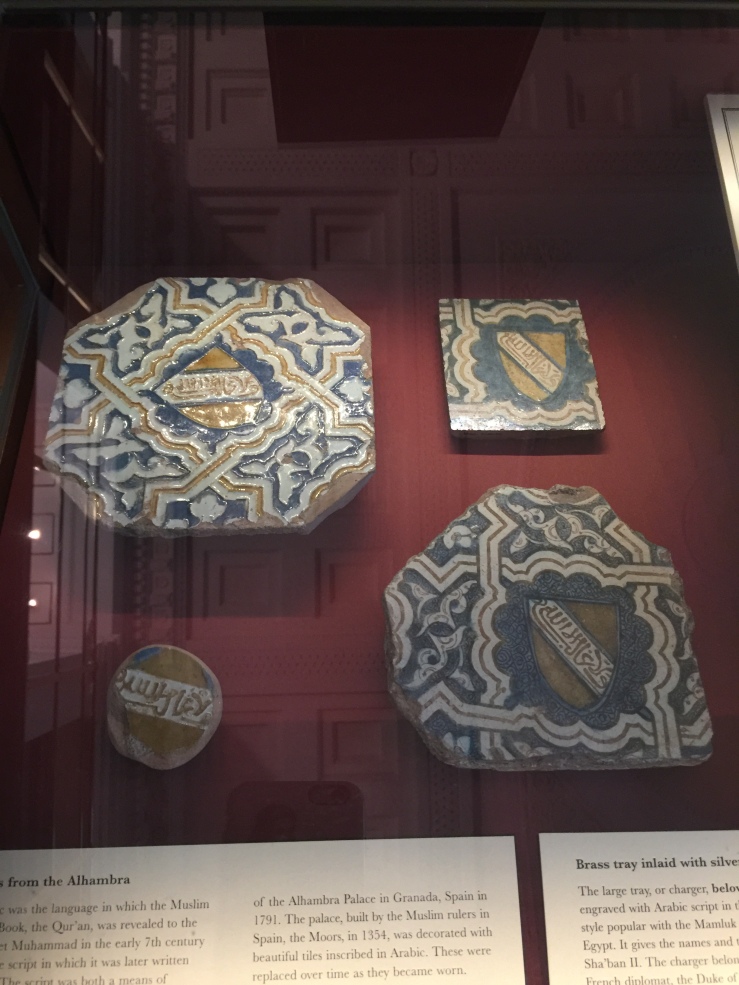 No. 4 – Chinese Porcelain for the European Market

In Case 23 there is a lovely Chinese porcelain plate that was traded with the East India Company in Canton. According to the object description it depicts a breadfruit tree and views of Plymouth and Canton. 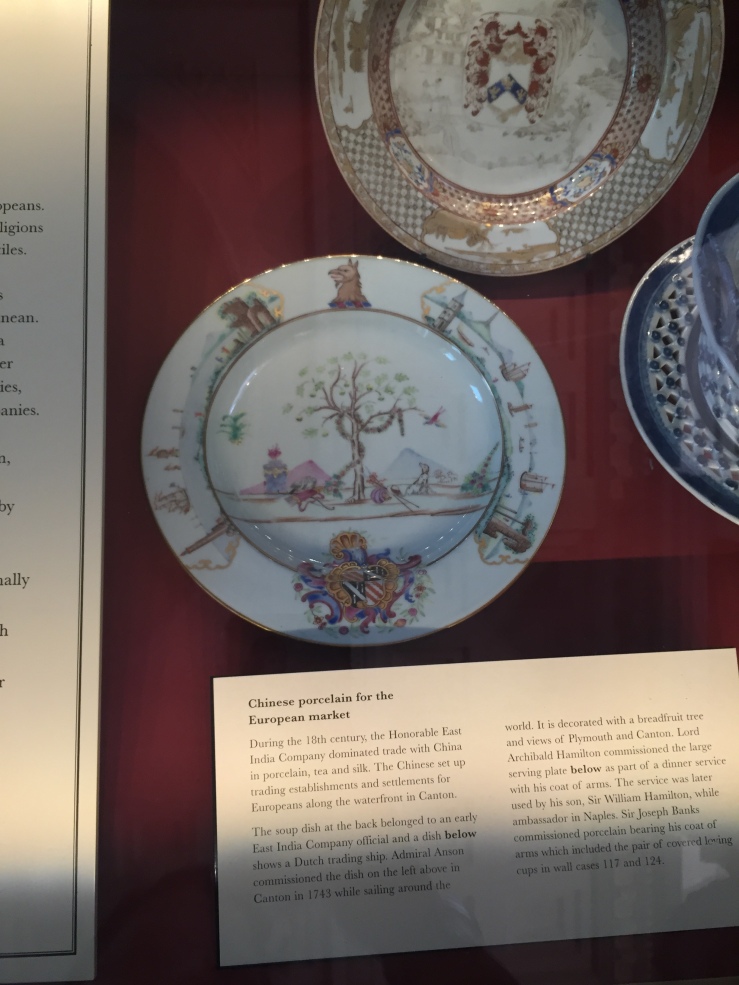 No. 3 – Letter on the Road to Decipherment

Case 16 focuses on hieroglyphs with a particular emphasis on code-breaking the Rosetta Stone. This particular letter is one of the most important developments in understanding hieroglyphs. Thomas Young, English scholar, sent the letter to his father, William John Bankes, in 1818. The hieroglyphs at the end of the letter are mostly correct translations allowing this letter to be particularly significant. 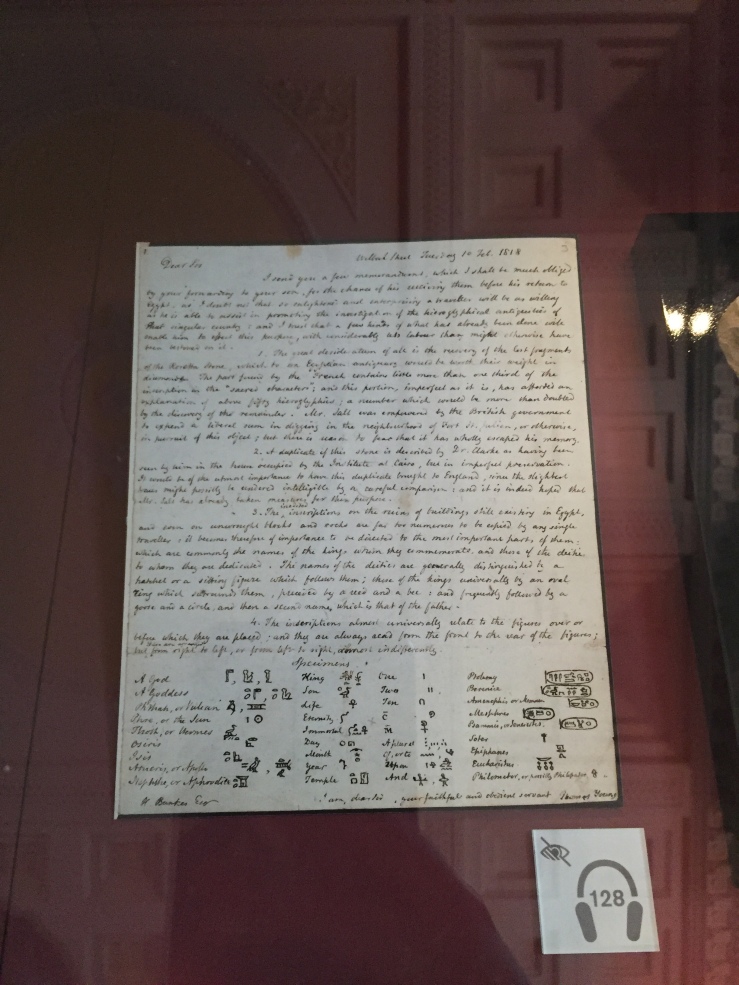 Not only are these drawings works of art, but, they provided a wealth of information on a number of natural history specimens. Completed by Maria Sibylla Merian in 1699, the drawings are all of the flora and fauna of Surinam in South America. What I particularly liked about this book is that the object label specified the pages would be turned every three months. Good for conservation, and good for the public who will be able to see a new drawing over time. 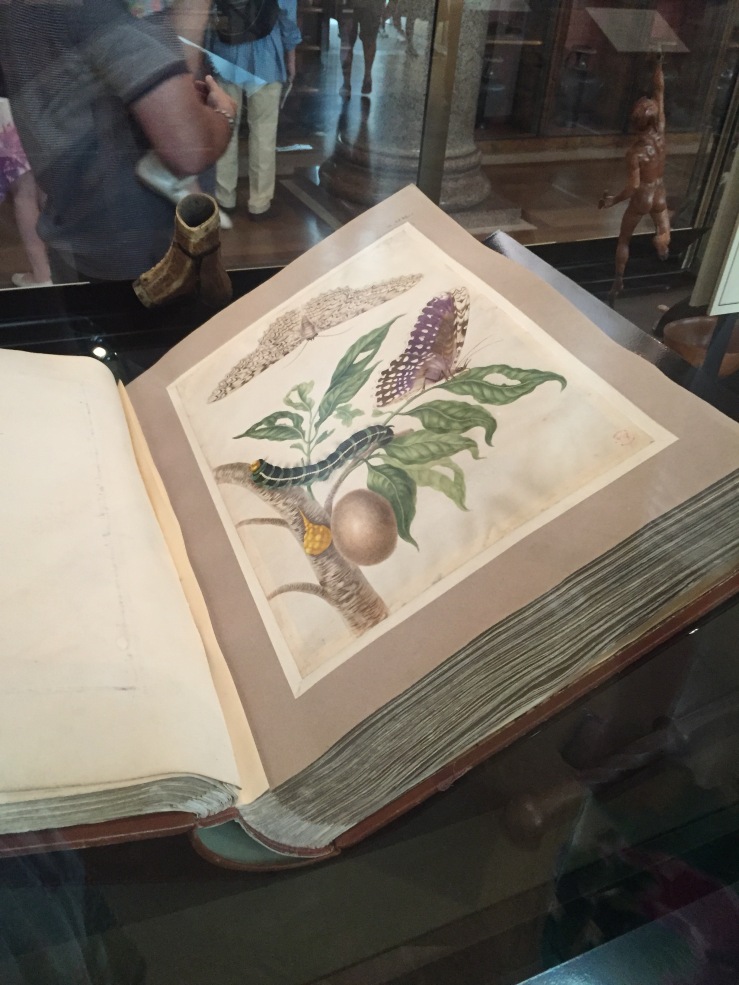 In the second room of the Enlightenment Gallery is this quite understated object. Similar to the tiles, I was drawn to this item because of its interesting design and colours. The dish has amazing provenance having been bequeathed to the museum by Edith Godman. Her father was a prolific collector of Spanish and Islamic pottery. His collection eventually grew to the largest private collection of Islamic pottery in the world. This plate is just one of the thousands of items that are now owned by the British Museum from the collection. 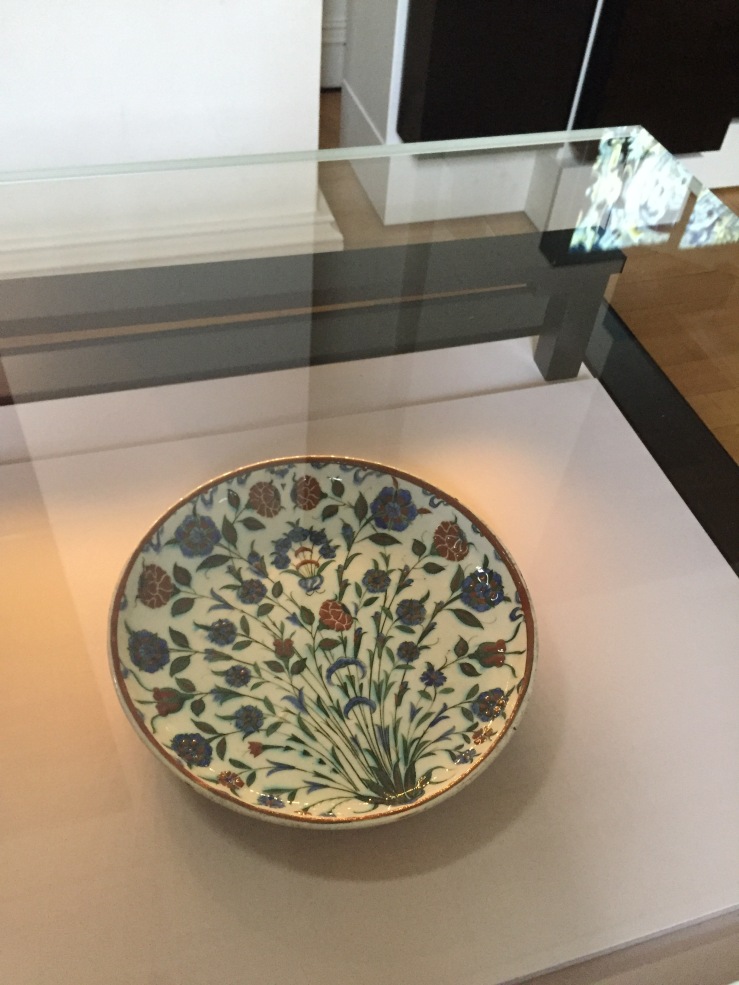 Apart from having a stroll around the galleries we had a wonderful talk from Stuart Frost who is the head of interpretation at the British Museum. We covered what interpretation strategies are in place in the permanent galleries of the museum and in the temporary exhibitions. For the permanent galleries, techniques that have been used include highlighting the most significant objects in the room. This helps tourists who may be rushing around the museum to see a snapshot of a collection area and decide to delve further or continue on. In the coins exhibition, for example, the most important objects are highlighted in pink. This is designed to attract people to look at the object more closely and read the information.

For the temporary exhibitions, it was very interesting to hear that almost 80% of visitors are United Kingdom citizens. Rather than walking through to catch the highlights, these exhibitions are designed for a more comprehensive experience. We went through the interpretation strategies of the Sunken Cities temporary exhibition that is trying to satisfy three categories of visitors: self-developers, families, and art lovers. In order to appeal to these three groups, the museum had a consultation with focus groups in the first drafting phase of the exhibition. This helped to determine what would work, what wouldn’t, etc. The idea of a family station developed out of these focus groups and are situated around the exhibition for use by children. The whole exhibition was aesthetically beautiful for the art lovers and contained a lot of information for the self-developers. 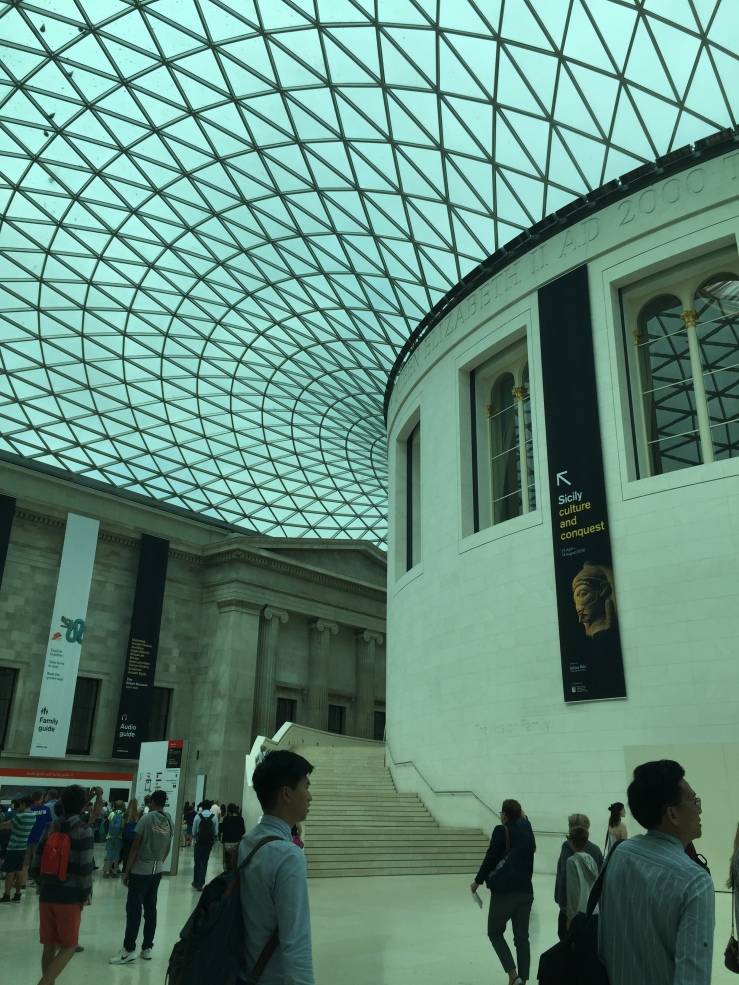 Although the space was painted a very dark blue, the conservation-grade lighting was enough for the labels to be readable. The soundscape of ocean music was at times a little creepy, but, mostly atmospheric. It was great to have a context video at the beginning of the exhibition for those unaware of the Greece and Egypt relationship. Throughout the exhibition there was a lot of interpretation available and I have to say I really enjoyed reading the thematic panels and actually learning about these interesting sunken cities. More often than not, object labels were incredibly helpful in providing the necessary information.

Overall, we had a great day at the British Museum. The most interesting part of our sessions was learning the difference between audience engagement in permanent galleries and temporary exhibitions. Although not applicable in every case, the distinction made between the types of audiences visiting was very insightful! A great new way to consider the audience and engagement strategies.