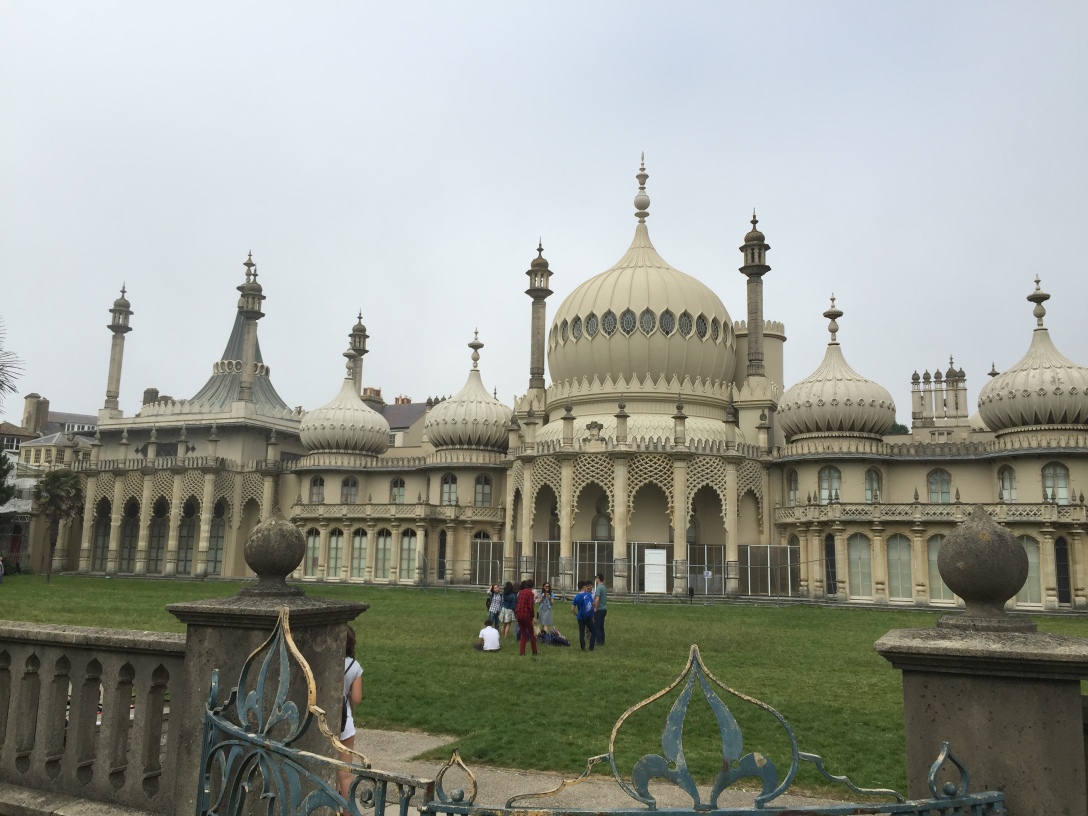 The Brighton Pavilion was one of the brightest and most architecturally interesting buildings I have ever visited. From the outside, it looks similar to a building complex you may find in India. It is stunning juxtaposed against the other buildings in Brighton. We had two talks in the Pavilion. The first was by Deborah Lambert who works in the fundraising team. We were then guided around by Jackie Marsh-Hobbs who was so passionate and knowledgeable.

Topics raised in the first talk on fundraising included membership, patronage, and Trusts and Foundations. It was interesting to hear that the Pavilion has around four thousand members who each pay an annual fee that varies depending on whether they are adults, students, etc. In return, they are allowed free entry into the Pavilion and associated sites and access to special events. Patrons, however, donate anything from 500 to 1000 pounds each year. As well as free entry, they are invited to more exclusive events. These were provided as examples of unrestricted income that the site can utilize for whatever they see fit. On the other hand, Trusts and Foundations are more restrictive and are usually granted for specific projects such as restoration works.

After this quick discussion we went on a guided tour of the Pavilion with Jackie. The first thing stressed was that the interiors have been restored. Luckily, when the Pavilion was completed watercolour pictures were painted of each room. This meant the rooms could be restored to as close to the original as possible. Although predominantly Indian on the outside, the interior is decorated in what is known today as chinoiserie. This includes Chinese furniture and figurines, and even steel and wood painted to look like bamboo. The important thing to remember is the interior is decorated by individuals who had never been to China. They were depending on firsthand accounts and drawings as inspiration for their designs. It is a very recognizable style and a clear reflection of the period.

The story of the Pavilion is fascinating. It was built by George IV and finished in 1815. According to Jackie, the building reflects the “kid in a candy store” personality of George. Everything was done to excess. Some years later, after George had passed away, Queen Victoria removed all interiors and the building was to be demolished. The town of Brighton, however, voted to keep the building and until very recent, it functioned as a civic centre stripped of its glory.

Today, the decor of the building is a mix of original, copies of original, and miscellaneous pieces from the time period. A lot of the furniture, silverware, etc was kept by Queen Victoria and relocated, for example, to Buckingham Palace. Luckily quite a bit of the original furnishings have been returned.

The lower floor tour included the music room, long gallery, banqueting hall, kitchen, banqueting hall gallery, and two reception rooms. In my opinion, the two most amazing rooms were the banqueting hall and music room. They were absolutely massive and filled to the brim with decorations and exquisite artworks. In the middle of the dining room was a huge chandelier designed to look as though a dragon figurine was supporting it from the ceiling. It comprised of around 15 000 pieces of glass. Another highlight object was an original wall painting that had been rescued from Buckingham Palace and now rests back in its original location.

The music room was slightly less of a sensory overload. The most interesting stories in this room were unfortunately ones of destruction. After the restoration of the building finished, someone threw a fire bomb through the room’s window causing widespread destruction. Eleven years later, the room was reopened with a beautiful new handwoven carpet imported from Ireland. Later that year, a hurricane hit Brighton causing a segment of the dome to fall off and crash through the ceiling and floor. What resulted was quite a bit of rain damage. Again, the room had to be restored. The important part of the story is that both times the room has been restored and reopened.

When the tour finished we were free to explore the rest of the Pavilion. We walked through the King’s Apartments and the rooms of Queen Victoria that were the only ones not restored to resemble when the building first opened. There were interpretive panels and one opportunity for tactile learning (touching the different types of wallpaper). We walked briskly through the top floor only stopping to read when something caught our attention.

Visit the Pavilion if you want a truly unique experience in the middle of Brighton. It is unlike the majority of palaces I have seen and it is a great insight into a very different era.

(photographs were not allowed inside the building)