I wanted to write a quick blog entry on the Tennessee State Museum and the Parthenon.

Firstly, the Tennessee State Museum is located very close to the Tennessee State Capitol. It is an absolutely huge museum covering the entire history of Tennessee. And I mean the entire history from the prehistoric period to today. The museum starts with an overview of relevant Native American history. The other two floors are focused on the Antebellum and Civil War periods. We found it impossible to read every label and see every object. Basically the museum struck me as more of a place where you wander around and read what looks appealing.

It was a bit overwhelming so we enjoyed retreating to the temporary exhibition area. There was a fantastic exhibition on display by artist Jessica Ingram. It included a series of very harrowing photographs of locations in Mississippi and Tennessee where attacks on African Americans took place prior to the 1960s. Each photograph was accompanied by their story. It was a very powerful exhibition.

Moving on to something completely different – the Parthenon. In the middle of Centennial Park is a life-sized replica of the Parthenon. It is one of the most bizarre things I have ever seen. It was left over from the 1897 Tennessee Centennial and International Exposition. Inside, is one of the worlds largest free-standing sculptures depicting Athena. The rest of the museum contained a limited number of objects but did give a general idea of the exposition. There were some medals and ribbons on display. 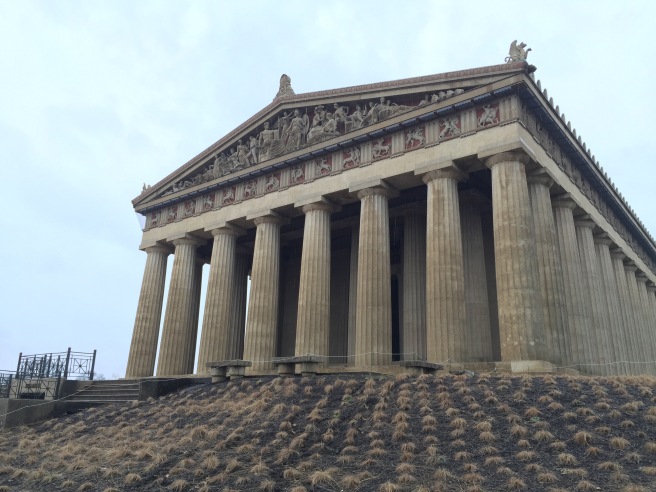 This city continues to amaze me.