Today we tied up our walking shoes and set our sights on two very different but very marvellous museums. We began with the Victoria and Albert Museum (V&A). Built on the site that the Crystal Palace (1851) once stood this museum is a gem from the entrance to the gift shop. There is just so much to see in this museum my main piece of advice is to grab a map!

Since we were on the ground floor and since I have no patience, we rushed straight to the fashion collection. They have some absolutely stunning pieces on display. I just wish there was more for the public to see. It was very teasing! My favourite piece was this corset from the nineteenth-century. It is so beautifully embroidered and manufactured. Some of the other pieces of under garments travelled out to Brisbane for the “Undressed” exhibit. It is incredibly fascinating to see how the ideal body shape has been achieved throughout time with the use of bits and bobs to restrict and mould. 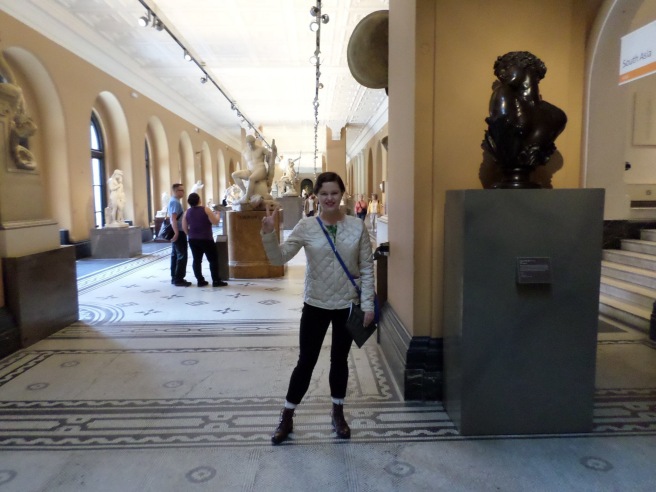 Other than the fashion section we walked up to see the furniture and ceramics. Again, fantastic layout.

Before we left I noticed they were hosting this exhibit on luxury. Look at this quote:

Isn’t it just amazing! The whole exhibit was a wonderful representation on what is a luxury and how it can be defined. I loved the fact they recognised time is a luxury – one I would like to have more of here! The building itself is architecturally marvellous. I think it’s important for a museum to not only have the right objects but look the right part.

After the V&A we went down to Harrods for something to eat. A museum in itself where you can learn about how much might be too much for a scarf. Heaps of food displays just a shame there’s no audio guide 😉

To round off the day we decided that it was time for the Hunterian Museum. I am so excited to write about this one. I’ll be speaking about it at the History of Medicine Conference in Sydney in July. It’s free to enter so no excuses. The audio guide is 3 pounds 50 pence but well worth doing. It just provides a nice backbone of information to what you’re seeing. Highlights for me were the Irish Giant (point of controversy read about it here: http://www.telegraph.co.uk/news/science/8973135/Why-the-Irish-giants-skeleton-remains-a-bone-of-contention.html) and the section on anaesthesia. Also the thousands of jars filled with I-cannot-unsee-these-things were pretty awesome.

Back to anaesthesia. So imagine having one of your legs amputated without it. Sure some surgeons were so good they could take under a minute to perform the procedure but anything less than never having to go through it is going to hurt. The first time a form of  anaesthesia was used to render someone unconscious it was such a massive deal that it caught on pretty quickly. The patient apparently awoke to say he didn’t want to go through with the procedure anymore. But hey, it had already been done. The thought of surgery without anaesthesia makes me ill so thanks to these early pioneers for transforming surgery!

The rest of the museum is great to walk around. You have no idea what you might see stuffed in a jar. The layout itself is logical and very well done. I felt like I’d stepped back into the past and was seeing the museum as John Hunter would have liked it.

Such great museums for very different reasons. You’ve entertained and inspired me today!!