On Wednesday the 12th of July, I attended the History of Medicine Conference in Melbourne. I presented alongside three incredible women, Monica Cronin, Tilly Boleyn, and Ari Hunter, in a panel on Women in the History of Medicine. Rather than provide a summary of the day, I have decided to post my talk (an abbreviated version) and screenshots of some of the publicity our panel received through Twitter. It focuses on how museums can assist in rewriting dominant narratives and represent the women who have been consistently marginalised.

In 1812, Frances ‘Fanny’ Burney underwent a mastectomy without anaesthesia. In the days post her surgery, Burney wrote a letter to her sister Esther Burney describing, in great detail, her experience of surgery. Almost ninety years later, in 1901, Dr Lucy Gertrude MacMahon was born in Sydney. After studying at the University of Sydney, MacMahon was awarded her Bachelor of Medicine, Bachelor of Surgery and began practicing as an anaesthetist. Whilst seemingly unrelated, these two specific case studies can shed much light on the experiences of women in this history. Both, however, present different research challenges which will be explored.

To start, however, I am going to provide some context on the history of anaesthesia and the persistent issues that have emerged in the discipline. On October 16, 1846, William T. G. Morton publicly demonstrated the use of ether as a form of anaesthesia. This surgery was performed at what is now termed the ether dome in Massachusetts General Hospital. Around the same time, Dr John Snow was experimenting with chloroform and ether. Snow was a significant figure in early public health. His work on cholera, in particular, has been celebrated as a major contribution to the understanding of health in the 19th century. He mapped the spread of cholera determining it was being spread by contaminated water. On the whole, the history of anaesthesia tends to focus on these characters, prioritising their developments and contributions. While their stories are important, the context in which they were operating in is often neglected. This is not because the evidence does not exist, it is because the evidence has not been properly analysed and evaluated.

In historical theory, this approach to analysing the past has been labelled the “Great Man theory”. Popular in the 19th century, this theory suggests that the past can be largely explained by “great men” or heroes who in some way impacted on the past. Over time, this theory has been re-evaluated and deemed too simplistic in understanding the past. Instead, different schools of history have now emerged that consider the past from a variety of angles – for example social, cultural, and gender history.

Rather than focusing on the “great men” these schools have turned their attention on re-interpreting the source material, incorporating different types of source material, and challenging the dominant narratives. The rest of my paper will delve into the stories of Frances Burney and Dr Lucy MacMahon. I will be answering questions such as: how can their stories contribute to understanding the history of anaesthesia? How can their accounts be examined from a different historical perspective and what can this tell us about the past?

The first example I am going to share is the account of Burney of her mastectomy in 1812. In the case of Burney, her full letter and account of surgery exists, yet has never been analysed in depth. It is considered an excellent example of an account written in the time before anaesthesia. In 2010, Michael Kaplan published the entire letter of Burney to his blog “The New Jacksonian Blog”. Prior to this, snippets of the letter were available in various places, however this blog entry has allowed the letter to reach wider audiences.

The account is primarily used to outline how horrific surgery was prior to anaesthesia. Burney is almost always used as an example resulting in her entire experience being broken down and fragmented. In particular, her account of the actual surgery itself is focused on. In her words “when the dreadful steel was plunged into the breast – ‘cutting through veins – arteries – flesh – nerves’. I am going to briefly cover the other topics raised by Burney and how her letter can be used for much more than simply understanding the exact moment of surgery pre-anaesthesia.

At the beginning of her letter, Burney writes on the events leading up to the surgery. As she states, “I began to be annoyed by a small pain in my breast, which went on augmenting from week to week.” Eventually, Burney was persuaded to see a medical professional and have an examination. Burney recounts how terrified she was at the prospect of something being wrong. It provides a fantastic insight into patient emotions that can be compared/contrasted to present day. It can also be read as indicating an awareness of the limitations of medicine. Perhaps her terror came from what was unknown regarding surgery. Later in the letter, Burney describes in detail her struggle with accepting the surgery and finally providing her consent. It reads as a tumultuous journey through stages of grief ending in acceptance.

“I called upon them to speak. M. Dubois then, after a long and unintelligible harangue, from his own disturbance, pronounced my doom. I now saw it was inevitable, and abstained from any further effort. They received my formal consent, and retired to fix a day.”

The letter can also allow for an insight into patient/doctor relationship in the 19th century. Throughout the letter, Burney references multiple doctors who were consulted regarding the potential for surgery. For each doctor, Burney writes down her impression and how she regarded their level of care. For M. Dubois, who provided the initial consultation, she was wary of his inability to tell her directly she required surgery. Instead, Dubois notified her friend this was the only option and it was his responsibility to then notify Burney displaying “the bitterest woe”.

Burney is then examined by Dr Larrey, Dr Moreau, and Dr Ribe. All three come to the conclusion that surgery is necessary. The patient/doctor relationship between Burney and Dr Larrey appeared most strong as on telling Burney the news he “had now tears in his Eyes’.

It is clear that Burney can offer a more diverse account of surgery pre-anaesthesia when her letter is read through different perspectives and with a sharper focus.

My second case study is on Dr Lucy Gertrude MacMahon, a foundation fellow of the Faculty of Anaesthetists Royal Australasian College of Surgeons. Prior to becoming the College of Anaesthetists, a faculty was established in 1952. There were forty original fellows of the Faculty including six women. During my internship at the Geoffrey Kaye Museum, I researched all forty Foundation Fellows for the online exhibition Lives of the Fellows. As part of this online exhibition, a biography was required for each Fellow including some basic information such as date and place of birth. I was working to a project deadline and had twenty days to complete as much research as possible. In the twenty days, I managed to complete preliminary research on all forty fellows and additionally completed fifteen entries including sourcing photographs and objects in the collection. Each ‘fact’ about the fellow was validated through thorough primary research. Lives of the Fellows is still an ongoing project collecting further research and building upon the foundations.

For many, the research was quite straight forward. Many of the male fellows had war records that detailed their date and place of birth along with their University qualifications and other interesting pieces of information.

One woman in particular, Dr Mary Burnell, had folders filled with information and primary source documents. Her anaesthesia records, details of her study, certifications, and information on her travels was all available in the archives. For many of the other women, however, their files contained minimal information and required extra research. Rather than dismissing these stories as the research can be perceived as too challenging, writing these women back into the story and history was achievable with the right skills and tools.

Dr MacMahon was selected as I saw the most transformation with her story. The following will now cover how I pieced together her story.

To start, I was made aware that she came from New South Wales so my first stop was the New South Wales Government Registry of Births, Deaths & Marriages. Considering I had a middle name and an approximate date range, I was able to discover MacMahon was born on the 21st of May 1901 in the town of Cootamundra. She died in June 1996. I then found year books from the University of Sydney, discovering that she was awarded her MB CHM – or Bachelor of Medicine, Bachelor of Surgery in 1924. The year book also disclosed that MacMahon had undertaken her residency at the Royal Prince Alfred Hospital in Sydney. Just from two databases, I had already pieced together a short biography.

In order to boost her biography and ensure that her story in the history of anaesthesia was recongised in the exhibition, I focused my attention on the treasure chest that is Trove. For those of you who are unaware of Trove, it is a search engine that “brings together content from libraries, museums, archives, repositories, and other research and collecting organisations big and small”.

In Trove, you are able to search for an individual, narrowing the date range, adding important information to refine your search, and, ultimately, viewing the relevant documents, images, or books. When I typed in Dr Lucy MacMahon and set the date parameters, I was met with a wealth of information. Dr MacMahon was a socialite. She attended many balls, weddings, parties, and other social events in the 1920s and 1930s. At each of these events, information was provided such as where she was working. This is mainly because the events were held to raise funds for hospitals. I pieced together that MacMahon worked at the Canterbury District Memorial Hospital before moving to Lewisham Hospital in Sydney until 1938. She then worked at St Vincent’s Hospital in Sydney before venturing off to England. In a newspaper article from 1938, it stated she was on board the Orion ship to England which we confirmed against ship records.

Even the exordium document revealed more than I first realised. The address of her practice she had provided was the same as Dr Harry Daly. This would indicate that on her return to Australia after World War II she entered into private practice with Daly.

Apart from her professional placements, the newspaper articles also revealed information on her family. MacMahon had two brothers and four sisters. Her sister, Dora, was also a doctor and two of her other sisters had married doctors.

By filling in the gaps of her story, we are ensuring that the work and life of Dr MacMahon is not neglected from the wider picture of the Foundation Fellows. Her contributions as an early female anaesthetist have now been recognised and publicised for visitors to the online exhibition. Her story can shed light on the history of anaesthesia by providing a different perspective.

It was also interesting to see what other history was revealed by searching her name.  For example, I discovered the popularity of hospital charity functions in Sydney during the 1920s and 1930s and the type of audience they attracted. Through databases such as Trove, these histories and stories are becoming increasingly accessible. 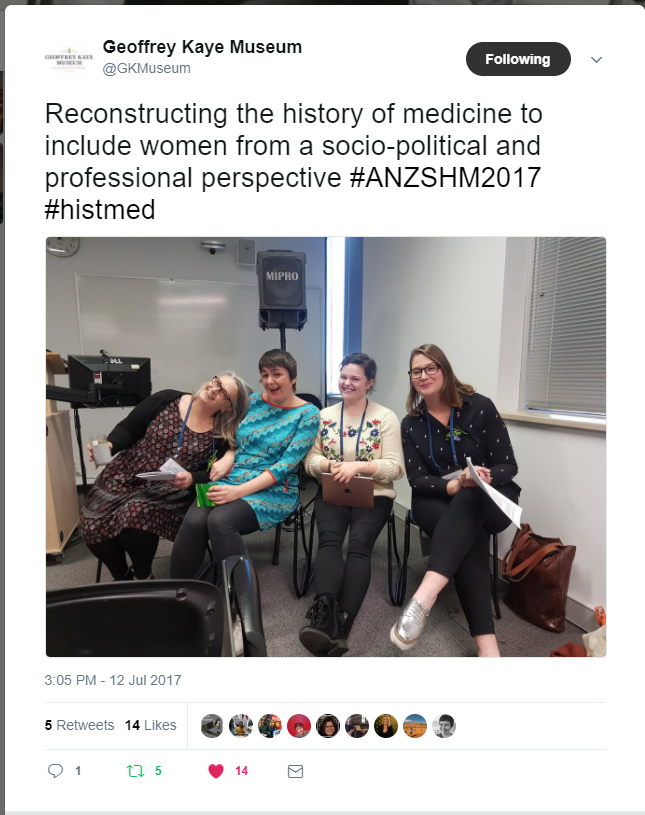