This blog entry won’t contain any surprises. I am a Marvel fan through and through and I am so glad I had the opportunity to see this wonderful exhibition at the Gallery of Modern Art in Brisbane. I still cannot believe this exhibition came to my home city! It is the first serious effort to display a whole bunch of Marvel costumes, comics, and objects in the one place. According to the introductory panel, the objects have been drawn from the collection of Marvel Studios in Los Angeles and loans from private collections.

I get a little frustrated when people say that Blockbuster exhibitions are purely money grabbing and cater way too much to the masses. Never in my life have I seen both children and adults so engaged in an exhibition space.. The costumes and comics were true works of art and are just as worthy as any contemporary work of art to be on display in a gallery. Now that I’ve said that, the rest of this post will focus on some of the exhibition highlights.

The overall theme of the exhibition was to trace how characters in the Marvel Universe are connected. For those who have valiantly sat through every Marvel film, you will know that the universe is complex, interconnected, and outright amazing. The exhibition sought to discover the links between the movies/comics and pay homage to the creativity behind the studio. I thought this was a nice way to connect everything together. Rather than the whole exhibition being just “look at this cool stuff” which, let’s face it, I would have still loved.

This theme is highlighted in the middle foyer connecting the two main parts of the exhibition. There are some computers and touch screens available for interaction. Visitors can select various characters and see how they relate to each other and to the overarching storylines. 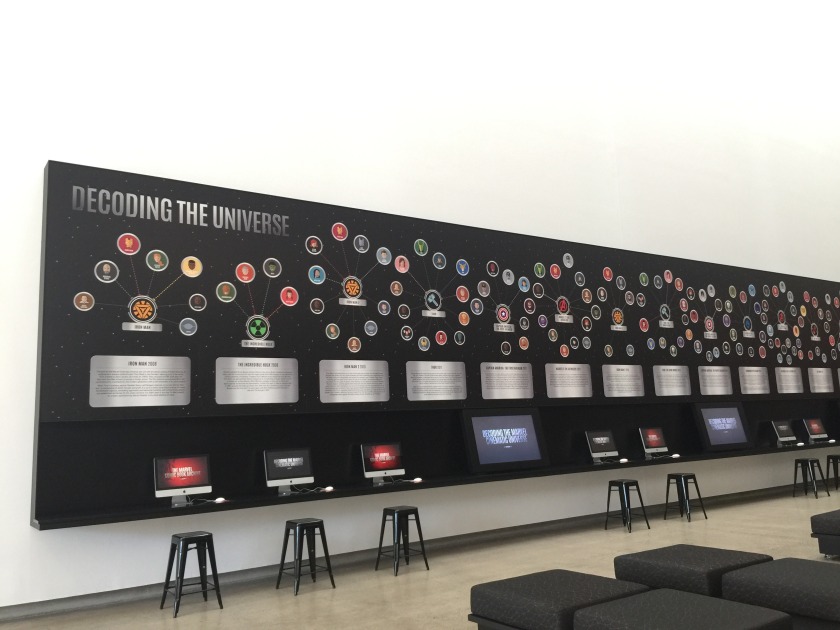 The exhibition is huge. It covers almost the entire first floor of the gallery and contained approximately nine rooms. I didn’t count the exact number, but it did feel as though it just kept going. The first part of the exhibition covers the main different groups in the Marvel Universe. There is a room for the Avengers, Captain America, Thor, Iron Man, and the Guardians of the Galaxy. Each room had its own feel that reflected the various films. For example, in the room for Thor, the giant throne of Asgard welcomed visitors to the space. This room is juxtaposed against the one for Guardians of the Galaxy that was designed to look more industrial and rustic. 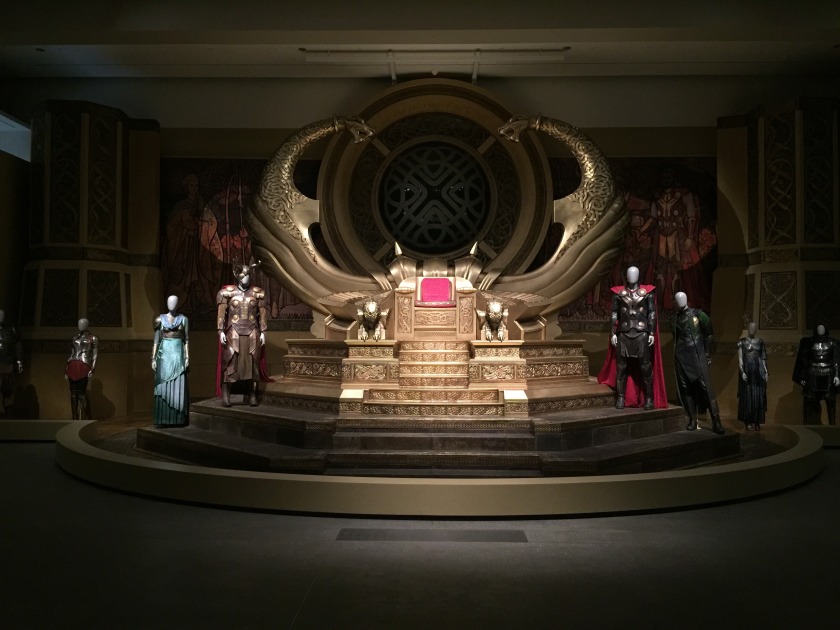 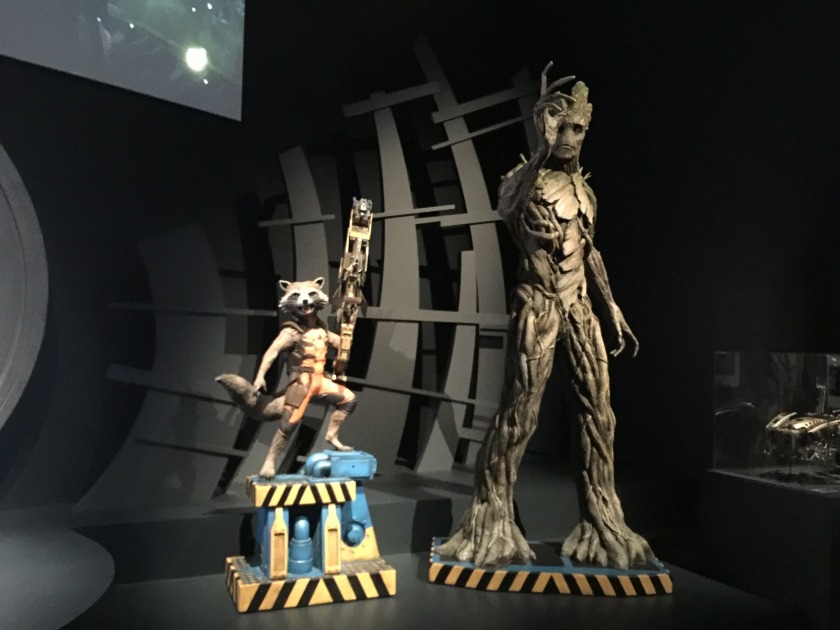 The second part of the exhibition looked more at how Marvel is created – so the production side of things. Suits worn by actors for CGI purposes and digital storyboards filled the space revealing some behind-the-scenes secrets.

The exhibition was easy to follow and although there was a prescribed path through the rooms, you never knew what was around the corner. It was therefore a little suspenseful and kept things exciting enough.

Each space had a thematic panel and there were object labels. Because of this small amount of text, people were actually reading the signs. Yay! The focus was, however, on the objects themselves. They were displayed with great impact in the different spaces. For example, in the room for the Avengers, the most eye-catching part of the display was the costumes that had been placed on mannequins. As a picture paints a thousand words, see below for a visual. 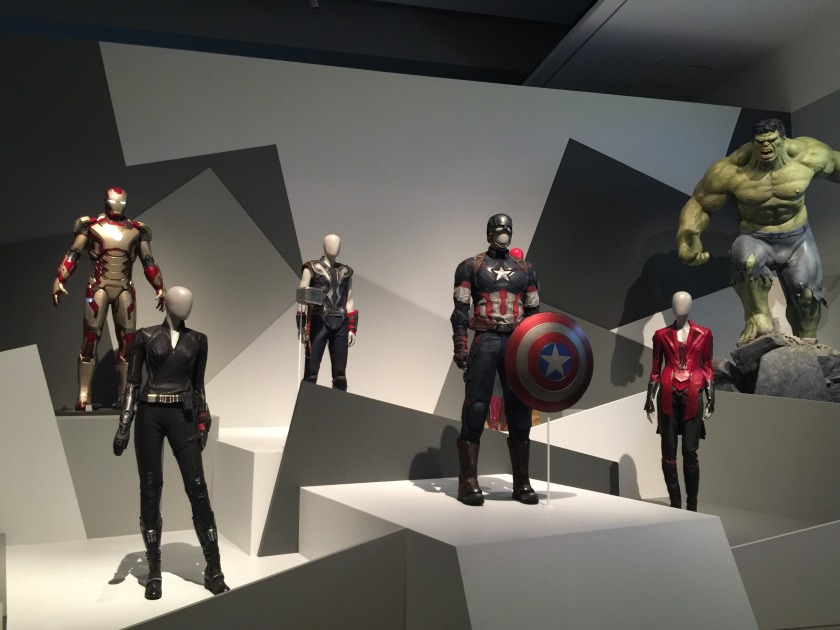 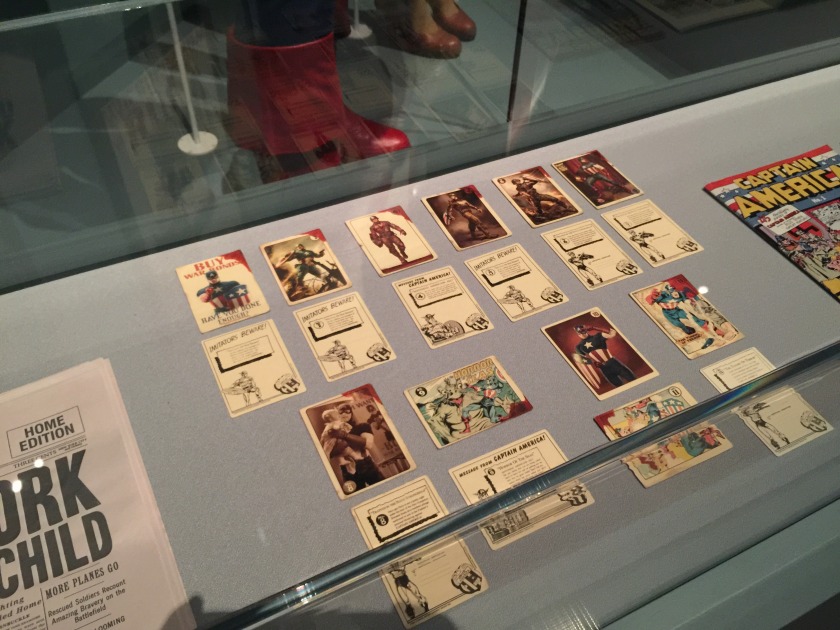 The Captain America room had me completely nerding out because the costumes were displayed exactly how they were in the Smithsonian in the film. It was as if you were walking in on the film. They even had the sound bite playing that was on loop in the Smithsonian. If this isn’t meta – a display of a display in a film – then I don’t know what is.

The location of the objects was clearly well designed with large spaces between objects catering to the crowds. You didn’t spend the entire exhibition bumping into everyone trying to see everything. Even though it was a Wednesday, it was busy and when we left there were about three school groups heading on in. This is where I do have one criticism. For some reason, and I’d like to know why, there were no timed tickets. I can’t imagine how busy it would get on the weekend. With no clear form of crowd control in place, we were extremely lucky with our timing.

In each room there were snippets of film being played that related to the objects on display. There was no sound so it wasn’t too distracting but you could see the objects in action. This allowed for a little more context. As there was no sound, it also meant people weren’t spending long watching the content and blocking parts of the exhibition.

I thought they might overdo the digital in this exhibition. In the first half there was virtually nothing interactive. It was you, the objects, and bliss. When you went to the section on ‘behind-the-scenes’ a lot more digital was present, but it made sense. My favourite digital inclusion was a large storyboard table that showed the process of designing the characters and the scenes. The comics came to life in front of you without taking up a huge amount of space.

There was even a small section where you could step into a space and see how CGI technology works. Your movements were replicated on the screen by a different character depending on which area you stood in.

Overall, the exhibition met and exceeded my expectations. It wasn’t a tacky exhibition – it was actually really well curated. Rather than placing the costumes on display next to some comics, it tried to tell an overall story and look at the art and technique behind the films. After seeing all your favourite characters, you were then treated to exactly how they were made. The exhibition was self-aware and took this opportunity to actually be informative and interesting. 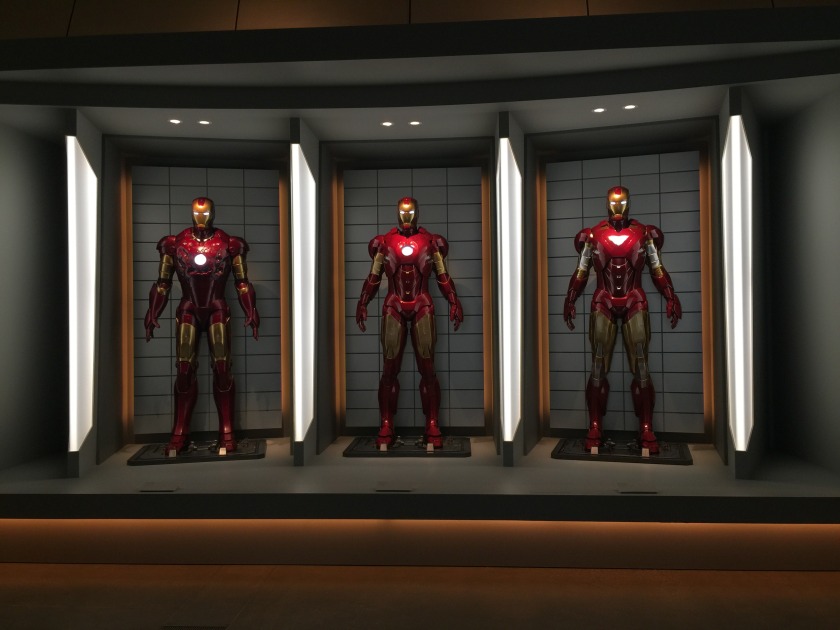