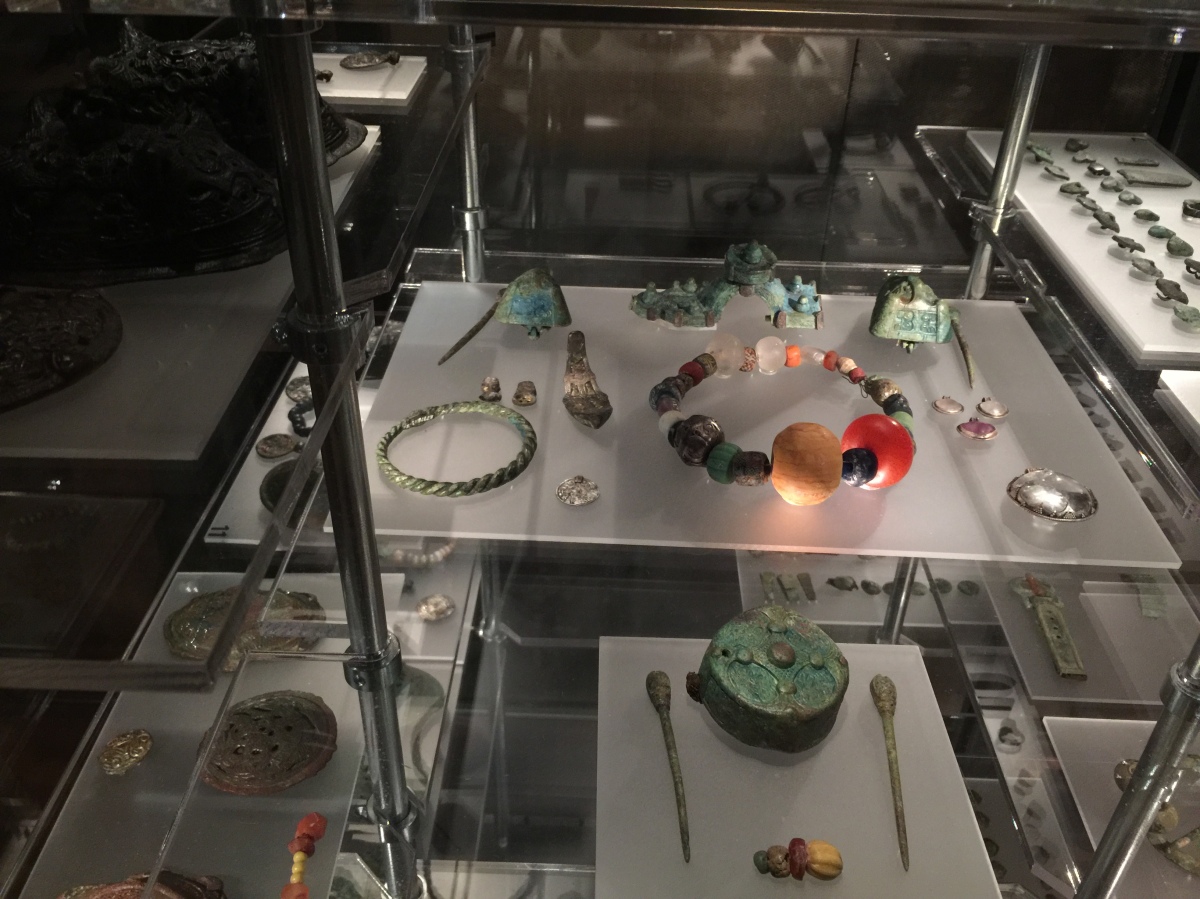 If you are interested in Viking history then this museum is a must. It holds one of the largest collections of Viking-related objects in the world. On display is only a fraction of this collection which is pretty hard to believe considering the exhibition was massive. I am going to review the Viking exhibition and then more generally discuss the rest of the museum.

From a design perspective, the Viking exhibition was, in my opinion, very effective. Small display cases were organized logically throughout the space highlighted by spotlights. The entire exhibition was easy to navigate and allowed visitors to select their own path. There were some thematic panels covering the history of the Viking Age. These were not crucial to read, however, as objects were displayed thematically not chronologically. This meant you were free to focus on one or two particular themes and were not locked into following a didactic narrative. I actually think this worked really well considering I wasn’t visiting to learn the definitive history of the Viking Age. The following were five themes that I found to be most intriguing.

Quite a few of the objects on display were excavated from the Viking settlement of Birka. This display case was very interesting as it contained an array of children’s toys and jewellery found at their burial sites. Children could hold important social positions within a Viking Age community. Today, their status can be determined from what objects were included in their burial pits. On the lower shelf of the case was a duck carved out of wood. It was quite an emotionally-charged object. 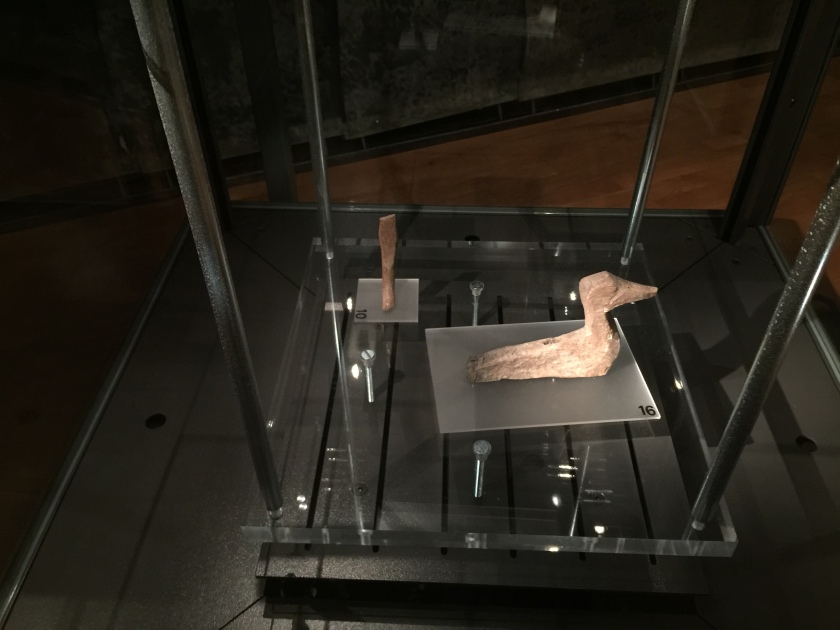 This theme was accompanied by a very brief panel. Essentially it stated that appearances were very important in the Viking Age for both men and women. I selected this theme because I liked the objects on display. There were around twenty wooden combs, many of which still had all their teeth. It is amazing to think these objects have been so well preserved and continue to exist almost in their entirety. 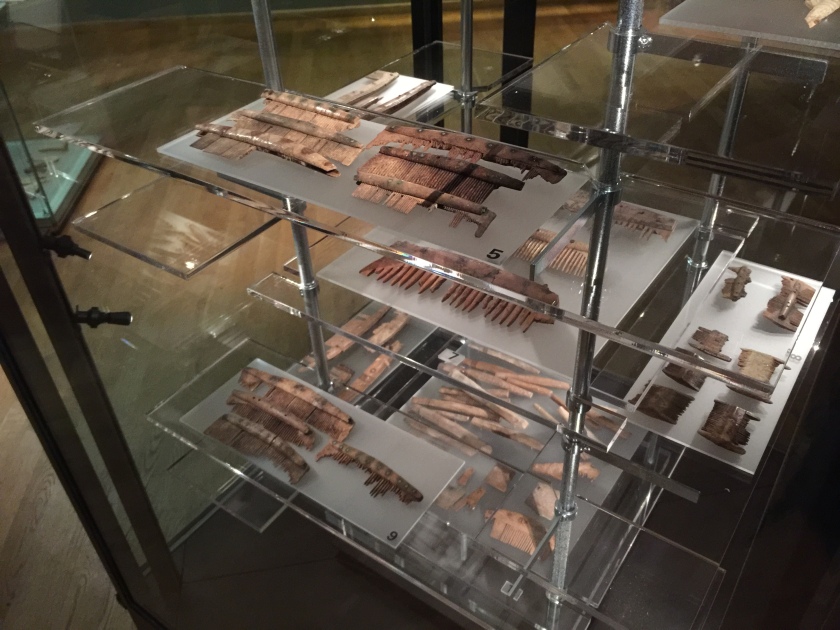 Jewellery has been discovered in all Viking burial sites excavated around Sweden. My absolute favourite object was in this display case – a beautiful multi-coloured necklace. Green, red, orange, brown, grey, and white beads were joined together and attached to a black piece of leather. Considering the other objects in the case were once copper that has oxidized, the colours stood out. On another shelf were an array of small silver metal hearts. Similar to the beads, they were once attached together to form a necklace. Basically, there were a lot of beautiful intricate objects found in this case. 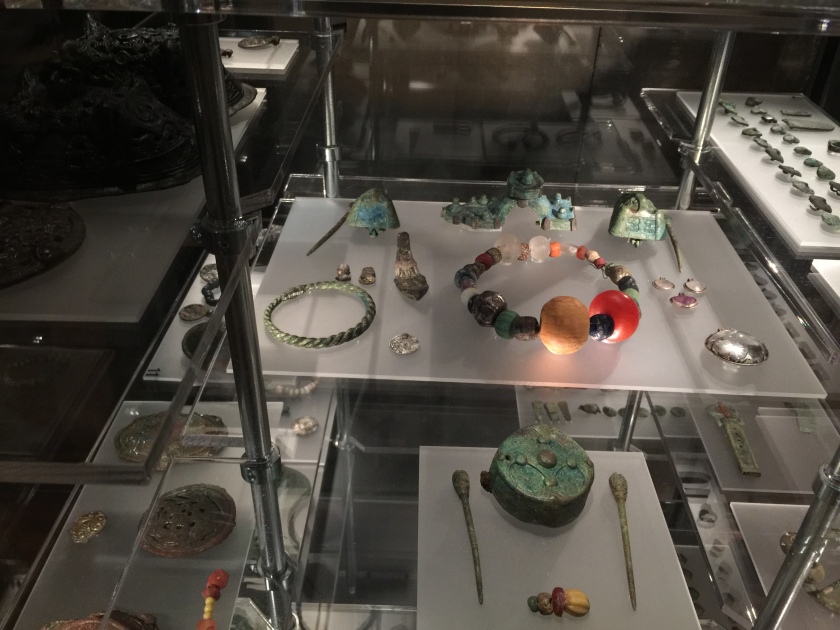 4. The Princess from Birka

A great display that showcased how powerful women could be in the Viking Age. All of the objects in this display case were retrieved from the burial site of the so-called Princess from Birka. These included a key, indicating her influence over an estate , a bronze bowl from Ireland, extravagant jewellery, and a whalebone board used to press linen. The jewellery was particularly impressive as seen below. Women could definitely rise to prominent positions in the Viking Age. It was interesting to learn that if a woman was buried with a key, this often indicated they controlled an estate and were quite wealthy.

Last, but not least, was the theme of weapons. Swords are displayed vertically in a glass case allowing visitors to see both sides. I thought it was a great move on behalf of the exhibition design team. Being able to walk around a display case and see an object from a variety of perspectives allows for much closer observations.

The rest of the museum covered other periods of Swedish history. Difficult issues were tackled including the effects of the slave trade on Sweden. The History Unfolds exhibition in particular covered such issues in “an attempt at making visible how history is created and used, and how it in turn has influenced and still influences our view of society” (Swedish History Museum, 2016).

There was a lot to see in the one museum and it was quite overwhelming tackling the entire museum at once. Ideally, it would be great to return and focus on one exhibition at a time. Nevertheless, we retained as much information as we possibly could from one visit and left with a clearer understanding of Sweden’s past.