We had a very jam-packed day at Stowe. In total we listened to four lectures and had a very comprehensive tour of the entire house. Whilst I would love to write a little something on each of the talks and on the tour, I feel as though that would be an incredibly long post. Instead, I am only going to write on the tour of the house we had with Susan, a wonderful volunteer. Rather than dates and events, the tour focused on the stories of the house and those that lived within. The house was originally owned by the Temples-Grenville family and was built in the late 17th century and completely rebuilt in the 18th century. Arriving in England as sheep farmers, the family eventually worked their way up the social ladder to become Dukes and Duchesses. 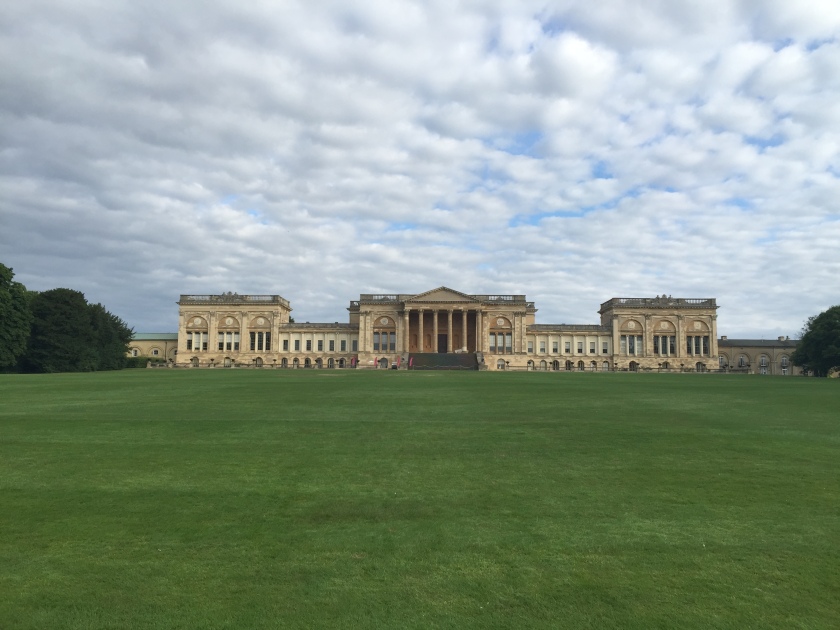 The tour began in the North Annex of the house where we heard a little bit more about the family and the first owner of the house, Viscount Cobham or Richard Temple. Cobham fought in the War of Spanish Succession alongside the 1st Duke of Marlborough. On return to England, Cobham offended the Prime Minister at the time, Walpole, who stripped him of his military titles. Forced into an early retirement, Cobham turned his attention to completing Stowe House. Elements of his attitude towards Walpole can be seen throughout the house and in the garden. For example, Cobham painted himself into the ceiling of the North Annex receiving the sword of Mars – a sign of military strength. He is also surrounded by images of Roman mythology adding to the allure of power.

We left the Temple family for a quick visit to the ante-library to talk about the development of Stowe School. Opening in 1923, the school quite literally prevented the demolition of the building. The first headmaster, J. F. Roxburgh, had a ‘modern’ attitude towards his students. He believed in valuing each individual stating they should be acceptable at a dance, but, invaluable at a shipwreck. Although initially a school just for boys, in 2003 it became co-ed. We are currently staying in one of the school dorms!

After the library we rejoined the story of the Temple-Grenville family in the blue drawing room. You could trace the family history from the portraits in the room. After Cobham’s death in 1749, no legal heir meant the estate was passed to his sister, Hester, who had married into the Grenville family. Hester had five sons and one daughter, also named Hester. The daughter would eventually marry William Pitt the Elder. Three of the sons became Prime Ministers of England. As you can see, the family became quite influential.

During this time period, the 18th century, the world famous gardens of Stowe were completed by Capability Brown. Brown was a protagonist of the English Garden movement. Unlike the gardens in France that were so structured, English Gardens naturalized the landscape making it appear as though it was entirely natural. We are going to walk through the gardens tomorrow and admire the many temples.

We then moved into the library and admired the 23 carat gold leaf ceiling decal. It is amazing to think it is now used by students! Our tour finished with a discussion on the downfall of the Temple-Grenville family. Eventually the family achieved the title of Duke and Duchess. They only momentarily enjoyed reaching this social status. The second Duke of Buckingham owned the estate in 1832. Unfortunately he was a womanizer, gambler and horrifically in debt. In one day, he spent between 20 to 30 million pounds (today’s equivalent) to prepare Stowe House for the visit of Queen Victoria. After this visit, the family went bankrupt. In 1848 there was a huge sale of the interiors of the estate with Christie’s holding a forty day sale.

This is why the house is not adorned with furniture or trinkets. The Stowe Preservation Trust, however, has been able to salvage some objects. They are currently on display in the Discovery Centre and the house itself. It was an excellent tour of the house and provided such a great introduction to the Temple-Grenville family. If you’re wondering why it is called Stowe House, Stowe means a religious place in early Anglo-Saxon.

Besides from the tour we had a talk on how the site is managed, how the house is interpreted, and the community and school programs on offer. We had one activity to complete – create a thematic trail around the house. I created a fashion trail utilizing the paintings on display. Considering we had 10 minutes to complete the activity I was quite happy with the end result!

It was such a great day filled to the brim with information. I cannot wait to learn more about Stowe.