What a truly amazing experience at the Roman Baths. I arrived nice and early and found myself to be the only person in line. Not only this, but, when I went to the free tour meeting spot an hour later it was just me and a lovely couple from London. So I essentially got a free private tour and could ask as many annoying questions as possible. It really does pay to wake up early! This blog entry will cover the museum, the main bath itself, the audio guide, and the guided tour. I’ve never experienced so many forms of interpretation in one place so it was definitely an interesting morning.

To get to the lower level of the bath you must walk through a museum. As well as panels and object labels, you could also listen to an audio guide. I did find myself only listening to the guide for the more impressive objects and relying on panels for the others. The museum covered life in Roman Bath from funerary practices to symbols in the temple and everything in between. There was also a section where you could walk above the ruins of the city. Highlight objects for me were the Roman Curse Tablets that have been inscribed on the Memory of the World UK UNESCO Register in 2014. If someone, for example, stole your blanket whilst you were bathing, you could write a curse on a piece of lead, give it to a priest to bless, and throw it in the water. If it floated, the curse would be projected back on to you. Some of the curses on display included one to whoever stole a cape and one suggesting possible culprits to help the Gods find the wrongdoer.

Similar to the fashion museum , I was really impressed with the signage. After each exhibition space was a panel showing you what you had seen and where you were heading. It contextualized each space nicely and provided a great overview.

After the museum you can then exit to the main bath. It is an impressive area and I strongly recommend you circumnavigate the entire bath entering into the little side rooms. One takes you to the chambers for undressing and applying oils. They are all quite well preserved. What the audio guide adds to this area is explaining the archaeological evidence so I do recommend listening in at this stage. 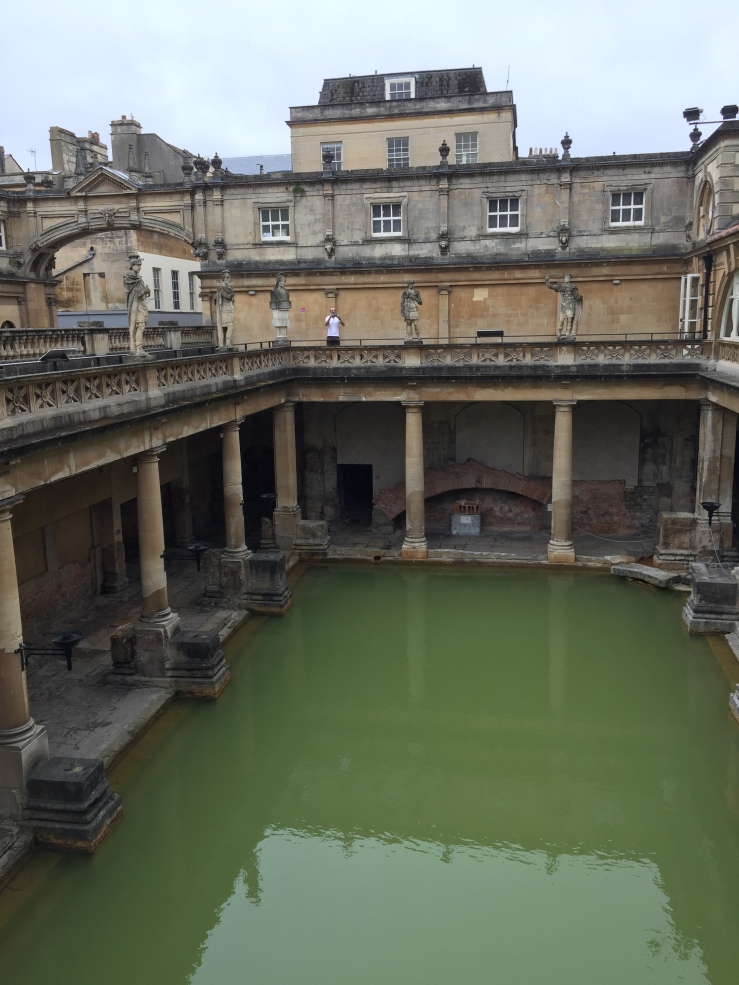 After an hour, I went on the guided tour. Our guide, Eugene, was awesome and had the patience of a saint. The highlight of the tour was hearing how the bath complex was uncovered in the Victorian era and how up until 1968 you could still swim in the water. Today you are strongly advised against that. But, we were told that some people do try to jump from the top level into the water and end up breaking their legs or arms. It is a very shallow bath. The uncovering happened like most archaeological finds. Something totally unrelated happens that leads to the discovery. From what I can remember there was an issue with a spring that had to be fixed and the more they dug down, the more history they uncovered. Thankfully, it is now wonderfully preserved and conserved for the public to view. I didn’t, however, read anywhere what conservation efforts are being carried out today.

I have visited the baths before, almost a decade ago now. I definitely discovered a lot more this time and experienced more of the site than I had before. It was great to be able to combine the interpretation techniques together and see what was missing from what and which had the information that suited me best. Out of all of them, I think the tour was the highlight. Being able to have that interaction with some knowledgeable individual could not be replaced by a guide or panel. Tours run every hour from 10.00 am on the hour and since they are free you might as well join! Since I am a tour guide at a heritage location in Sydney, no bias here…

1 thought on “The Roman Baths”